In the last couple of weeks talking heads have come up with some very novel ways to predict the next market crash or downturn. Ranking right at the top in popularity is; “The Wall Street Movie Release Indicator.” With charts and pictures of your favorite actors and movie posters, disciples of this magic tool tell us markets have been rocked following major motion picture releases about Wall Street. 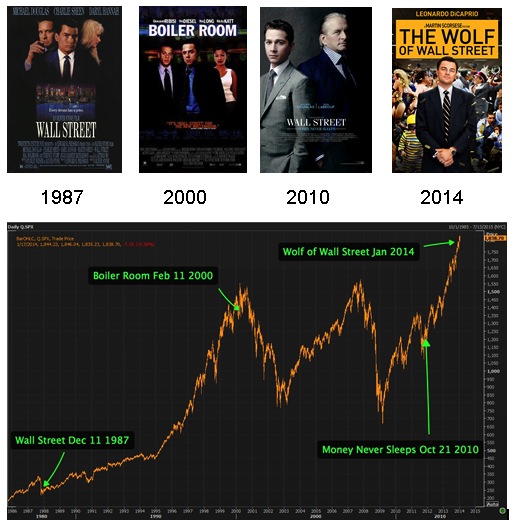 I always love these back of the envelope calls. I admit they are a lot of fun but at least for me, they work right up until the time I use them. I prefer something a little more concrete like GDP numbers, S&P earnings, estimate revisions, yada yada yada.

The four movies most often mentioned are Wall Street released in 1987, Boiler Room in 2000, Money Never Sleeps in 2010 and  The Wolf of Wall Street, still in theaters right now. According to the Movie Traders Secret Society with Wolf just released, a market crash is all but inevitable. Let’s take a look at these one at a time and examine the market carnage that followed.

Director Oliver Stone and Michael Douglas as the iconic Wall Street bad guy Gordon Gekko, play important roles in the movie that started it all. Gekko’s “Greed is Good” speech and phrases like “If you’re not inside you’re outside” were the gospel for many back in those days. The original Wall Street is the rock bed of the movie indicator thesis released in the year the Dow had a magnificent 508 point (-22%) one day plunge. Black Monday wiped out investors on October 19th, 1987.

Unfortunately, the theatrical release of Wall Street wasn’t until later that year on December 11th and offered no protection at all. As a matter fact, if you bought the S&P on the day the movie came out, you would have enjoyed an over 600% return over the next 12 years. The sequel Money Never Sleeps also wasn’t much help. If you sold out of your stocks on September 24th the film’s release date, you missed an 18% move higher over the next several months. The market did correct in the summer of 2011, but only back to where you started. No, the only one of these movies that predicted a downturn was Boiler Room, released in February 2000. Net net, I think you see what I’m driving at. There are no short cuts here and while the search for the elusive Holy Grail will certainly continue, I’m pretty sure the Wall Street Movie Release Indicator isn’t it.

← CNBC Panel from the Floor of the NYSE Emerging Markets Trigger Selloff in U.S. →