Home » Investment Management » January – What Happened, Why It Happened and What We Are Doing About It! 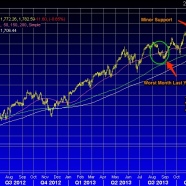 Posted by David Nelson, CFA on February 3, 2014 in Investment Management | Leave a comment 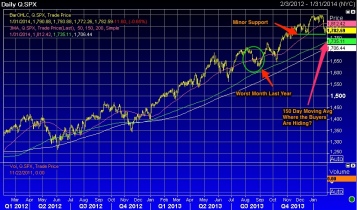 January was a month most stock investors would like to forget, especially coming on the heels of 2013 where the market offered few opportunities to get in.  Alpha Select outperformed this month but a 3.6% fall in the S&P has to be addressed. Let’s talk about; What happened, Why it happened and What we are doing about it? There are always challenges equity investors face and January certainly had its share. Let’s look at these one at a time. I’ll tell you what bothers me and what doesn’t.

The two likely culprit’s investors point to are the Fed taper and the horrible action in emerging markets. I’m not buying the argument that emerging markets are down solely because of the Fed taper and a potential slowdown in the U.S. Emerging markets are made up of individual countries each with their own issues. I think Larry Kudlow said it best pointing out that many of these developing countries have swung wildly to the left. “Brazil has become Argentina and Argentina has become Venezuela.” When investors see the phrase, accounting issues like we heard recently in China, no questions are asked. You hit the sell button. Emerging markets play an important role for investment flows and future growth but it’s important to look at these countries on an individual basis and ignore the urge to use a shotgun approach buying basket ETF’s like (EEM).

Headline risk is always with us. When you pick up the morning paper and the first headline you see is; “Turkish Lira Plummets as Contagion Spreads,” the knee jerk reaction is that this is 2008 all over again. Emerging market turmoil is always a concern and does indeed affect our markets but let’s get some perspective and scope out the size of the problem. 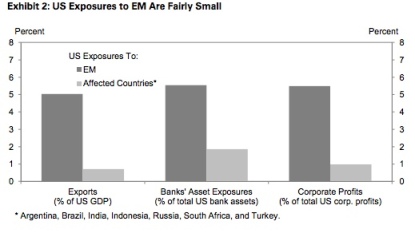 Goldman’s Portfolio Strategy team headed up by Ben Snider has done some excellent work on the subject. They point out just 5% of S&P 500 sales come from emerging markets and that as you can see in the chart; exposure to the affected countries is even smaller. They go on to say, equity declines here are generally half of what takes place in the MSCI EM. 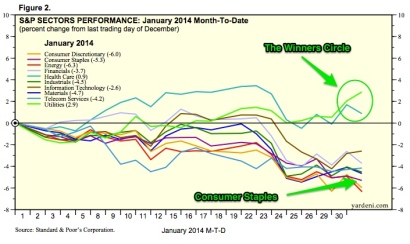 Certainly some companies are more exposed than others. Generally, in times of emerging markets’ turmoil, we get rotations from cyclical to more defensive sectors. Active equity portfolio managers start looking at emerging market exposure on an individual stock basis. In past episodes, Consumer Staples have been an excellent hiding place. It’s curious they have performed near the bottom this month and only slightly better than Consumer Discretionary which is under considerable pressure. With relatively little growth potential here, many of the large multi-national companies that dominate the sector have made a hard push into the emerging markets as a future growth engine. We’ve been significantly underweight Staples for more than a year finding very few companies meeting our growth and valuation parameters.

Standing in the winner’s circle this month is last year’s loser Utilities, followed by last year’s standout Healthcare. Utilities are a traditional safe haven but their rise this month may have as much to do with falling yields as it does with emerging markets. In my post 2 weeks ago, I wrote that our asset timing BullFinder ETF accounts were adding a full weight to bonds. (Currently BullFinder ETF Accounts have full exposure to US Equity and Bonds with nothing in Gold or International Stocks)

Why are Bonds Doing Better? 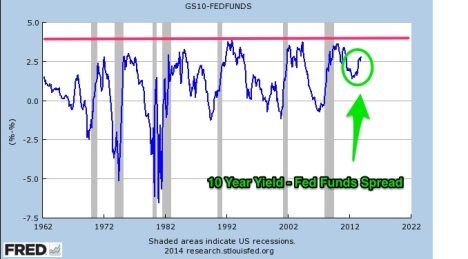 Admittedly, this could be fixed income markets anticipating a U.S. slowdown. However, let me point out another high probability alternative. The yield spread between the 10 Year and Fed Funds is in the upper quadrant. With inflation benign and the Fed holding down the short end of the curve, Bonds have shown us that a 3% 10 year is a formidable wall.

Of concern is a chart Michael Gayed, Chief Strategist of Pension Partners recently displayed showing a breakdown in the High Yield market. Michael is right. This is a concern and should be watched. You’ll notice in the chart we’ve recovered from these breakdowns several times in the last year. However, as he points out spreads between High Yield and Treasuries are pretty tight.

JNK vs Treasuries (This is a relative performance chart. When the Chart is going up Junk is outperforming)

Let’s look at the historical spread between BofA Merrill Lynch US High Yield Master II Effective Yield vs US Treasury 10 Year yields. As you can see in times of recession it can go through the roof. Let’s zoom in and look at the last year.

Now you can see more clearly that so far this year there has been a pretty big spike higher. Is this a concern? Yes it is, especially considering we are coming off a low base. We’ve recovered from several spikes over the last year but this needs to be monitored.

How About Some Good News

Alright, we’ve focused on several items of concern; let’s look at a few things that are going right. Positive estimate revisions are an important component of the Alpha Select Equity Model. When we started the year, 2014 consensus estimates for the S&P 500 stood at about $117.50 where they stand today.

We are more than half way through earnings season. After a rough start the percentage of companies reporting positive earnings surprises is right in line with averages. Even better news is shown in the chart from the Goldman Strategy team pointing out that revenue beats are well above historical averages for the last 4 quarters.

It’s pretty easy to see that that the reporting season has had its share of hits and misses. There were some real disappointments like Best Buy (BBY), IBM (IBM), Chevron (CVX) and even Apple (AAPL) with negative surprises, poor guidance or both. However, there were some real standouts this month. Facebook (FB), Google (GOOG), Helmerich & Payne (HP) and Harman (HAR) had blow-out quarters along with raised guidance.

For active equity managers like me every month has its share of changes and January was no different. The consumer here in the U.S is under pressure. We came into the year with only one retailer, Michael Kors (KORS) and we exit with zero. As much as we love the company and its business model the sector risk is too high.

I’ve been recommending Boeing (BA) for the better part of two years. It had been our largest holding over the last 12 months. The sell-off in Boeing certainly had nothing to do with the reported quarter. It doesn’t get any better than that. While the prospects for aerospace and Boeing are excellent my concern over potentially peaking cash flow has forced me to reduce the position. We sold shares the morning of the report and following day cutting the position by 50%. We may increase at some point in the future but for now I’ll wait and see how the quarter progresses.

While the positive price movement in Bonds and Utilities may be a head fake I’ve taken the bait adding Nextera (NEE), one of the few names in the Utility sector still showing signs of growth. This was my least favorite sector coming into the year. I’m definitely not in love with it but for now goes to equal weight. Much of Alpha Select activity takes place during the earnings season. Disappointments are rarely tolerated and the rotation generally takes us into companies that beat or have jumped to the top of the model. Sell-offs like this give us an opportunity to upgrade the portfolio and move into names that have pulled back along with the market but will likely lead the next leg higher.

The Good the Bad & the Ugly

We took 3 realized gains for the month of January. As I mentioned earlier half our position in Boeing (BA) was sold with a gain of 104%. The full positions in CBS Corp (CBS) and Michael Kors (KORS) were sold with realized gains of 45% and 26% respectively.

Worst realized loss was Occidental (OXY), sold with a loss of (-8.4%) followed by Canadian Pacific (CP) at (-7.9%). Amazon (AMZN) was sold in the aftermarket shortly after they reported earnings and the following morning registering a loss of (-7.6%). AMZN didn’t fit in the model because of valuation but I felt strongly that this was the quarter they would start adjusting their cost structure and show their earnings potential. That certainly wasn’t the case this quarter so it was eliminated. There were a few other minor sales of companies falling out of the model with very small losses between 0 & 4%.

Looking Ahead There’s a lot here to digest so please feel free to call or send an email with any questions. While I’m looking at some clouds on the horizon and have gotten the umbrella out  our targets for U.S. markets haven’t changed. More later…