Climbing the Wall of Worry – Alpha Select Update May 2014

Posted by David Nelson, CFA on June 2, 2014 in Investment Management | Leave a comment

Sometimes it all comes together and the stars are aligned for a good month. Alpha Select was up +4.4% and up +7.32% YTD. Perhaps more surprising was coming through the month with only 2 trades. This is certainly out of the norm especially during an earnings season where some companies are bound to disappoint.

We have to be mindful that markets and sector performance often revert to the mean so before we get too excited let’s break down what’s really going on here.

The market is giving us mixed signals everywhere and doing its best to confuse investors both professional and retail.

On top of everyone’s list of divergent signals is the bond market. You can see in the chart of the 10 Year Benchmark Yield that we broke serious support and even touched close to 2.4%. Perhaps an even more confusing picture comes from the next chart. Here we’re looking a performance comparison of the S&P 500 vs (TLT) 20+ Year Treasury Bond ETF for the last 2 years.

The green box is normal inverse correlation, a picture that often develops when the market senses the economy is getting better and interest rates are rising for the right reasons. Suddenly in 2014, the red box, bonds and stocks are highly correlated yet the market is pushing higher in the face of falling yields. 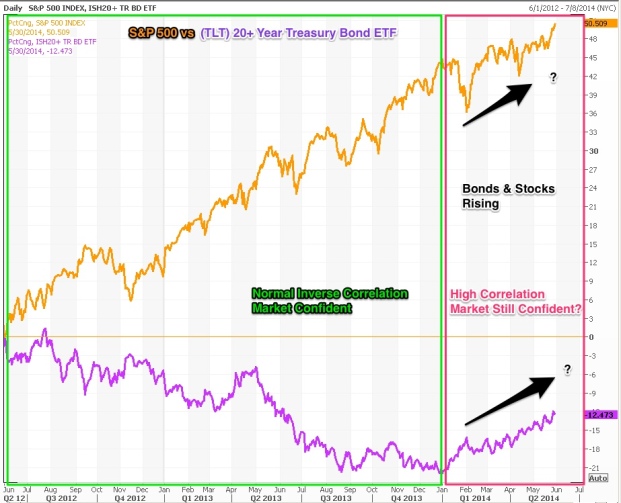 We know that the first quarter was a washout. Weather pretty much did in construction and in particular retail with many of the nation’s largest reporting disappointing sales and earnings. We got a confirmation of this with last week’s final revision of 1st quarter GDP, coming in with a disappointing (-1%).

Data from here on out has to start getting better. We can’t blame the weather anymore. Starting now, economic data needs to show signs of improvement. I will be closely watching pre-announcements as we approach the end of Q2 later this month.

Despite all we’ve been through this year, the consensus estimate for the S&P 500 is north of $117, just about where it started the year. Stocks are a discounting mechanism and are saying the bad news is behind us. Bonds are telling us just the opposite. Only one of these can be right.

The Good the Bad & the Ugly

As I said at the top there were only two transactions this month. Intel (INTC) was sold with a (-4%) loss. Replacing Intel is Micron (MU) which is already up 9.8% since it was purchased. We own two other semiconductor stocks, Avago (AVGO) and Qualcomm (QCOM) up 49% and 18% respectively. I didn’t want to carry 4 in the portfolio so the weak sister was let go.

This month’s winner is Trinity Industries up +13.4% for the month and +40% since purchased earlier this year.

Only 3 of our 24 stocks in Alpha Select were down this month and they all share one thing in common. All 3 are from the energy sector. Precision Drilling (PDS), Suncor (SU) and Valero (VLO) were down (-1.4%), (-2%) and (-3.2%) respectively. This is disappointing since energy as a group was up a couple of percent for the month. All three are up strongly since inception but I’ll be reviewing them during the next few days.

Click Here for profit and loss on all closed transactions

There will be a lot of data this week starting off with Monday’s ISM Index and Construction Spending releases. On Wednesday, we get ISM Services and the Beige Book. The big number this week is of course Friday’s Non-Farm Payrolls.

There you have it. The fifth inning is behind us but we still have a lot of work to do. I’ll be back throughout the month with comments on breaking news.