Signs of a Market Top?

Posted by David Nelson, CFA on June 10, 2014 in Uncategorized | Leave a comment

As an on the line portfolio manager and strategist for Belpointe, one of my first jobs is to identify what’s not working and either fix or eliminate it. This is a take no prisoners business. Most professionals have learned the hard lesson that letting bad investments linger in a portfolio is a quick ticket to the unemployment line.

As I scanned markets and reviewed a position report one startling fact seemed to leap off the screens EVERYTHING IS WORKING. I don’t mean things are starting to click. Stocks, bonds, sectors, commodities even (GLD) the SPYDER Gold ETF is up this year.

I quickly put together a list of 10 broad based ETF’s focused on major asset classes to confirm what I was seeing.

The performance chart says it all. Year to date they are all up. U.S., International, Emerging Markets, Frontier Markets, Large Cap, Bonds, etc. are all up on the year. Even the hard hit (IWM) Russell 2000 ETF managed to crawl back above the flat line last week.

Frontier markets have lead the way this year with iShares MSCI Frontier Fd (FM) up over 17%. As I mentioned earlier the iShares Russell 2000 (IWM) is at the bottom of the pack but never the less positive. Here in the U.S. Bonds lead the parade with iShares 20+ Year Bd (TLT) and iShares (TIP) well out in front. However, the S&P 500 (SPY) is closing the gap quickly and now up over 6% including dividends.

Of course not all individual securities have done well and we’ve made changes to both stock and bond portfolios but broadly speaking, the statement above is accurate.

What could all this mean? Is it the sign of a top? Perhaps it is the final push higher just before the most predicted crash in a generation. I decided to investigate further.

It’s a similar story here in the U.S. with all sectors in the S&P 500 in the green. Last year’s loser, Utilities lead the pack up over 13%. Despite a beleaguered consumer and retail struggling through one of its worst showings in recent memory, even the (XLY) SPDR Consumer Discretionary ETF went positive last week. 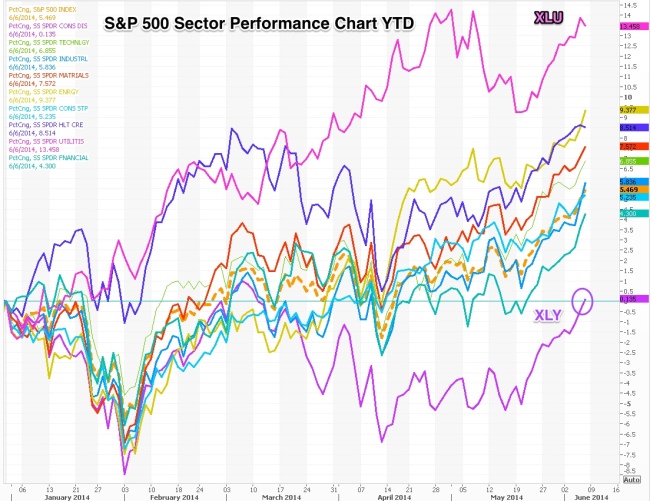 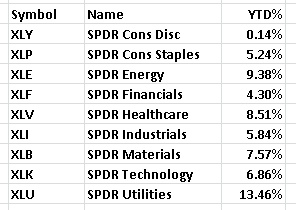 Many who appear in the media frequently including yours truly at one time or another this year have stepped up to the microphone sounding words of caution. Some have taken it even further reaching for their Elaine Garzarelli moment.

So what are the answers to the questions I asked earlier? The truth is, I don’t know. What I do know is that sitting on the sidelines waiting for a correction has been the wrong call for a very long time. Yes we haven’t had a serious correction since 2011 and of course eventually we’ll get one. But think about it. Is the conversation today really any different than it was with the S&P at 1500.