Posted by David Nelson, CFA on July 21, 2014 in Investment Management | Leave a comment 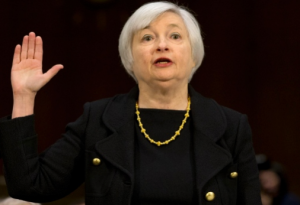 A cloud of controversy seems to have swept up the media regarding Fed Chair Yellen’s Congressional testimony where she signaled out two sectors or asset classes that she believes are showing some signs of froth. “How dare her”; voices from the crowd yelled. The morning after echoed those of a lynch mob attacking her for stating the obvious.

Quickly coming to the defense of sectors she highlighted was a parade of talking heads and analysts refuting her claims.

The market was seeing signs of froth in these two areas long before Janet took to the podium. Biotech’s have been struggling to regain their footing since March when a spike that had all the earmarks of a blow off top first started to emerge. Yes it seemed to rebound in June but absent Friday’s turn around, July hasn’t been a great month for the industry.

Analysts were quick to come out and defend their industry pointing out that current valuations are within historical norms and for the most part that’s true. However, it’s hardly the full picture.

The iShares NASDAQ Biotechnology Index ETF (IBB) is a popular proxy for investors looking for exposure to this high growth industry. Like most ETF’s its performance is dominated by the largest companies. According to iShares own marketing material the top 10 stocks represent over 56% of the portfolio. Gilead** (GILD), Celgene (CELG), Amgen (AMGN) and Biogen (BIIB) are at the top of the list. It would be hard to point to companies like Gilead and Amgen as contributing to froth sporting forward P/E’s of 12 & 14 respectively. Celgene and Biogen come out in the low 20’s and while more expensive than the market certainly reasonable given their growth rate.

But let’s be honest here. Many of these companies and in particular Amgen look more like large cap Pharma then traditional biotech’s. On the other side of the spectrum more than 60% of the stocks in (IBB) don’t even have P/E’s because they aren’t profitable.* Click Here for Valuation Spreadsheet

Nowhere in her testimony did she use the word bubble when she said the following; “Nevertheless, valuation metrics in some sectors do appear substantially stretched-particularly those for smaller firms in the social media and biotechnology industries, despite a notable downturn in equity prices for such firms early in the year.” 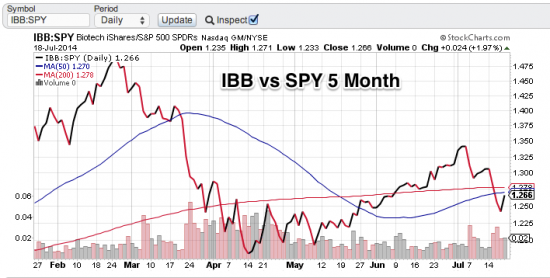 CNBC’s Josh Brown pointed out that the Fed was widely criticized for not recognizing the obvious back in 1999 just prior to the Dot Com fiasco. He’s right. This seems like a no win situation for the Fed. Damned if they do and damned if they don’t.

Janet also pointed to small caps as a sign of concern and again here the markets which generally are a lot smarter than talking heads have been saying the same thing all year.

A lot of relative performance themes have flip flopped since the start of the year. The tug of war between growth and value continues with no clear winner as of yet. However the poor relative performance of the iShares Russell 2000 (IWM) vs S&P 500 (SPY) has been just about the only consistent theme this year.

The Fed puts out comments throughout the year especially given the free reign Fed Governors enjoy when talking to the press. I think Janet is just stating the obvious and frankly the markets will adjust with or without her rhetoric. She said nothing of fed policy to force investors to trade out of risk assets.

What is the Likely Outcome?

(IWM) has put in what does look like a double top but the trend on a weekly chart going all the way back to 2011 still seems intact. It’s just when you look at the relative performance this year as compared to the S&P 500 does the problem really show itself.

How the markets handle these issues is of more importance than what Janet or any talking head jaw bones. The best case scenario is that Small Cap and Biotech trade sideways for a while. Granted this would look awful if the S&P continues its ascent but not necessarily a trigger for the next bear market.

← Malaysian Airliner Shot Down – On Air As It Happened Where Are the Perp Walks? – Man on the Street – CCTV →