Home » Investment Management » The Glass is Half ? 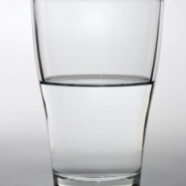 The Glass is Half ?

October tends to be a nervous period for investors. Anyone who’s been in the business long enough still remembers Black Monday in 1987 when the Dow fell over 22% in a single day. Market structure has changed dramatically since then. Trading halts and triggers that can close the market would prevent a disastrous one day event. Despite all the safety nets markets can achieve the same results pretty quickly. Perhaps the biggest surprise wasn’t the waterfall selloff but the rocket ship recovery that left many investors scratching their heads asking; is the glass half full or half empty?

Volatility returned with a vengeance pushing toward a mid-month selling climax as margin clerks took over dumping positions of over leveraged clients. In just 11 trading days the S&P 500 catapulted from a nearly 8% decline and added a couple of percentage points for good measure. Alpha Select portfolios weren’t able to keep up and only managed to tack on a fractional gain for the month. We’re up double digits year to date but now only marginally in front of the S&P 500.

Even though U.S. markets recovered all their losses it would be a mistake to label it just another dip buying opportunity. The character of this decline was different and I think it’s important to dig a little deeper.

Divergences in the market have been with us all year. The massive underperformance of Small Caps and the outperformance of Utilities are both signals that the market was struggling to maintain its footing.

You can see in the chart below that Healthcare & Utilities are the hands down winners. Utilities only represent a little over 3% of the index so their contribution adds less than 1% to the total return. However, Healthcare’s 13% weighting adds almost 3%. Technology with an 18.5% weighting adds over 2.5%. 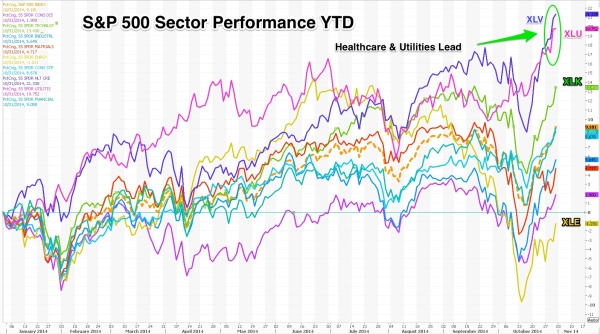 Last week’s performance was a step in the right direction. Conglomerates, Tech, Financials and Industrials were the market leaders. The U.S. stock market isn’t going to be led higher on the back of defensive sectors. Tech, industrials, financials and healthcare have to lead the way. 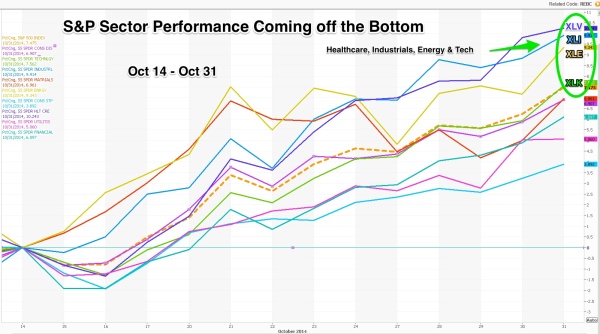 The Fed surprised many last week issuing a more hawkish FOMC statement than the street was looking for. Markets applauded with a strong rally the following day. As I said in last week’s post The Pendulum Shifts, the tide is turning and we seem to be finally moving toward a path of normalization.

The debate over QE will be with us for years. I’ve penned in the past that Fed Policy during the depths of the financial crisis likely saved our financial system preventing a domino effect of one bank failing after the next. However, I question what if anything was accomplished in the last round of QE. The challenge in coming years will be the Federal Reserve’s ability to unwind an over $4 Trillion balance sheet.

While QE may be in the rear view mirror here, it’s important to point out that it’s still front and center in Japan with Europe close behind.

On Saturday I had the pleasure of being a guest on Larry Kudlow’s Radio show. I told Larry I completely agreed with his comments made on CNBC saying Fed Governors are miss leading markets and responsible for some of the volatility.  I covered the same subject earlier this month in my article the Fed Needs a Communications Czar. I also pointed out that they are in violation of their own communications policy. It’s my hope that Chair Yellen will put an end to these off the cuff remarks and rein in the troops.

No review of October is going to be complete without a discussion about energy. Energy stocks have been a staple for value and yield investors as long as I’ve been in the business. Is the cause of the massive decline in energy prices due to oversupply or lack of demand? If it’s the latter then we may have a problem. I suspect it’s a little of both.

Even yield hungry MLP investors were hit hard. At one point on an intraday basis (AMJ) JP Morgan Alerian MLP ETN was down 18% from its September closing price. MLP’s are the toll collectors charging customers for the product traveling through their pipeline highway. For MLP’s energy prices don’t take on the same importance as they do for exploration and oil service companies. Hence, we can’t rule out weakening demand.

On the supply side it’s no secret the U.S. has changed the picture dramatically. Shale production here has weakened OPEC whose cartel like structure used to bring world leaders to their knees. No longer does the world cower in front of OPEC releases. Many of its member nations are struggling for their very survival and its leader Saudi Arabia is pumping full out realizing they can no longer dictate world energy prices.

Politically something has to give. Russia and Iran are two of the world’s leading bad actors and low oil prices are devastating their economies. The pendulum could swing either way forcing them to come to the bargaining table or turn them into dangerous wounded animals.

While the first look at 3rd quarter GDP looked strong coming in at 3.5% there was a lot of noise in the numbers. In particular, a pickup in defense spending boosted results. There’s likely to be some give back in Q4.

Last week’s Durable Goods orders disappointed, down 1.3% month over month. The street was looking for a 0.5% increase.

Despite these negatives consumer confidence jumped to 94.5 in October beating the street’s 87.0 expectations. September was revised higher as well.

U.S. Companies Should Invest for the Future

In a recent note Goldman’s Amanda Sneider, CFA points out that 301 S&P companies have reported so far with year over year growth for earnings and sales coming in at 10% and 5% respectively. 49% have beaten the street which is above historical averages.

Instead of plowing this money into more buybacks I would like to see more Capex. Not only will it insure future earnings growth but it will help the employment picture as well. R&D leads to new products, new factories and more employees. There are still too many workers not earning to their potential and far too many who are underemployed.

Increased buy backs only help the bottom line for so long. One look at IBM tells the story. Here’s a company that’s been boosting their earnings for decades on the back of cost cuts and buy backs. Now they’ve run out of bullets and are scrambling to dig their way out.

So the question remains is the glass half full or half empty? To tack on another leg to this bull market earnings should lead the way. If energy prices can stay low for the right reasons we could see some additional multiple expansion. Coming into the year my base line target for the S&P 500 was 2000. We’re just above it for the second time this year. Fox Business anchor Stuart Varney asked me on Friday, “when the Dow would hit 18,000.” We’re less than 4% away so I suppose we could get there in the next few months. Let’s see how November shapes up before we start looking at raising targets or making projections for 2015.

For now I think there’s enough evidence to say “The Glass is Half Full.”

The Good the Bad and the Ugly

Our partial sale of Kroger (KR) gave us the biggest realized return of +19.16%. Number two on the list was Lyondell which we closed out with a +11.5% gain. However, even after waiting for it to decline more than 12 points from our 104 sale price our buy back 3 weeks later was premature giving back about half our gains.

Helmerich & Payne (HP) was little more than a swing trade. After falling more than 15% from September’s lows we I stepped in and bought selling about a week later for a +5.58% gain.

The Bad and the Ugly.

While some of these names are higher than where sold their replacements are as well. If PTEN were still in the portfolio we would be sitting with an irrecoverable 30% loss in the name. Better to move on and find a new idea.

October’s in the rearview and we are in the late innings of 2014. There is lots of economic data hitting this week starting with Monday’s ISM Index and Construction Spending. We end the week with October’s Non-Farm Payroll numbers on Friday. I’ll be back throughout the month with more updates.

Please feel free to reach out with any questions.

* Click Here for P&L on all closed Alpha Select Transactions

Performance reported is not GIPS compliant and has not been audited by a third party. Policies for valuing portfolios, calculating performance, and preparing compliant presentations are available upon request. Data as of 10/31/2014.