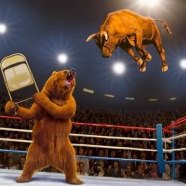 Posted by David Nelson, CFA on December 1, 2014 in Investment Management | Leave a comment 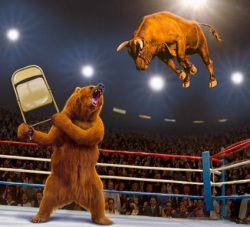 Nothing short of a December knock out is going to save the Bears this year. With only 3 down months in 2014, the ref’s scorecard has it 8-3 Bulls including a standing 8 count in October. Despite a month whose biggest one day move was just over 1/2%, November still had its share of fireworks. 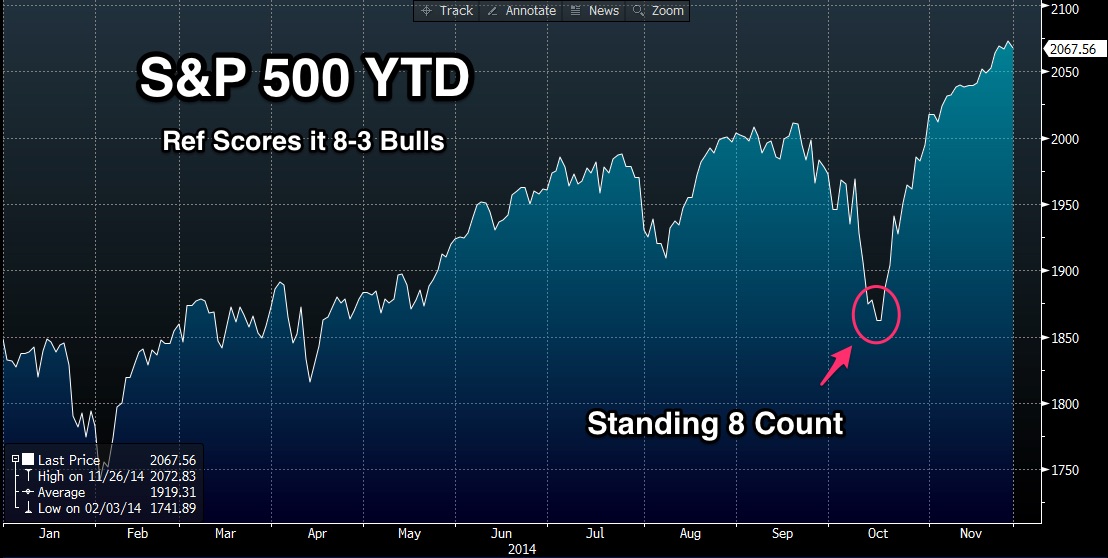 The Energy Sector found itself on the front page daily as Oil continued its slide from June highs culminating in last week’s collapse with OPEC conceding there is little if anything they can do. November’s performance seems all the more notable given energy stocks were down well over 8% and still represent over 8% of the index knocking 0.73% off the month’s return. Strong showings from Consumer Discretionary, Consumer Staples, Healthcare and Tech more than made up for the weakness in the Oil Patch pushing the index to new highs. 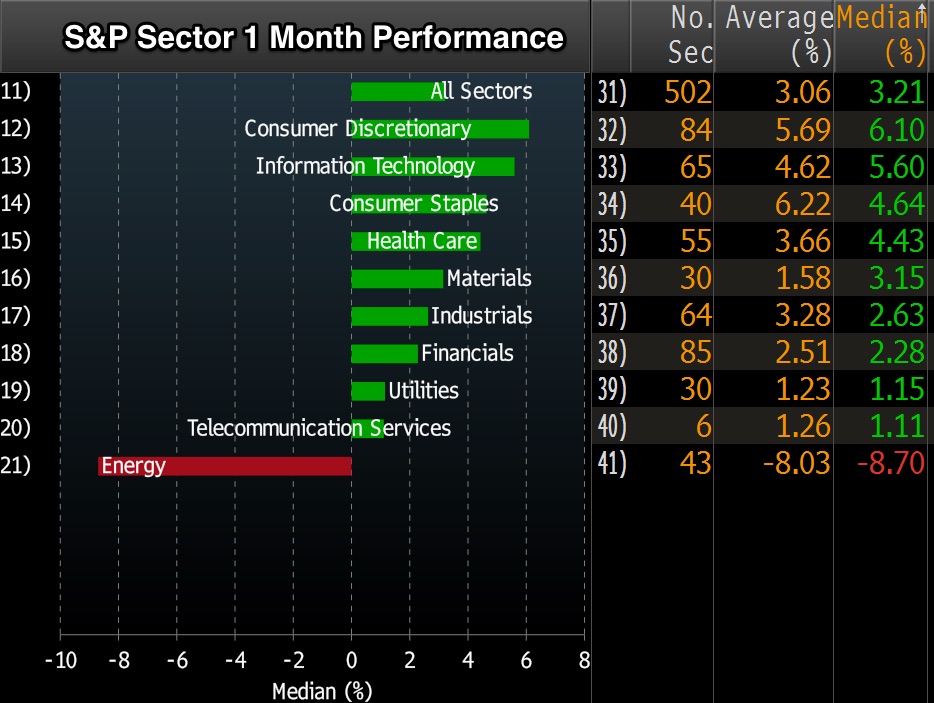 The market and our economy are still adjusting to the Fed’s removal of QE. Admittedly, GDP growth hovering at best near 3% is hardly anything to write home about but looks great in comparison to the Eurozone, Brazil and Japan. China’s growth still towers over the rest of the developed world but they are on a downward trajectory as President XI tries to re-shape their economy. Like it or not the market is still being run by the TINA (There is no alternative) crowd.

Falling yields add to the TINA effect but they also raise red flags pointing to slowing growth. A year ago, many including myself were convinced rates were headed higher but a look at the US Treasury Yield Curve below shows 10 year yields have fallen 21% in the last 12 months. 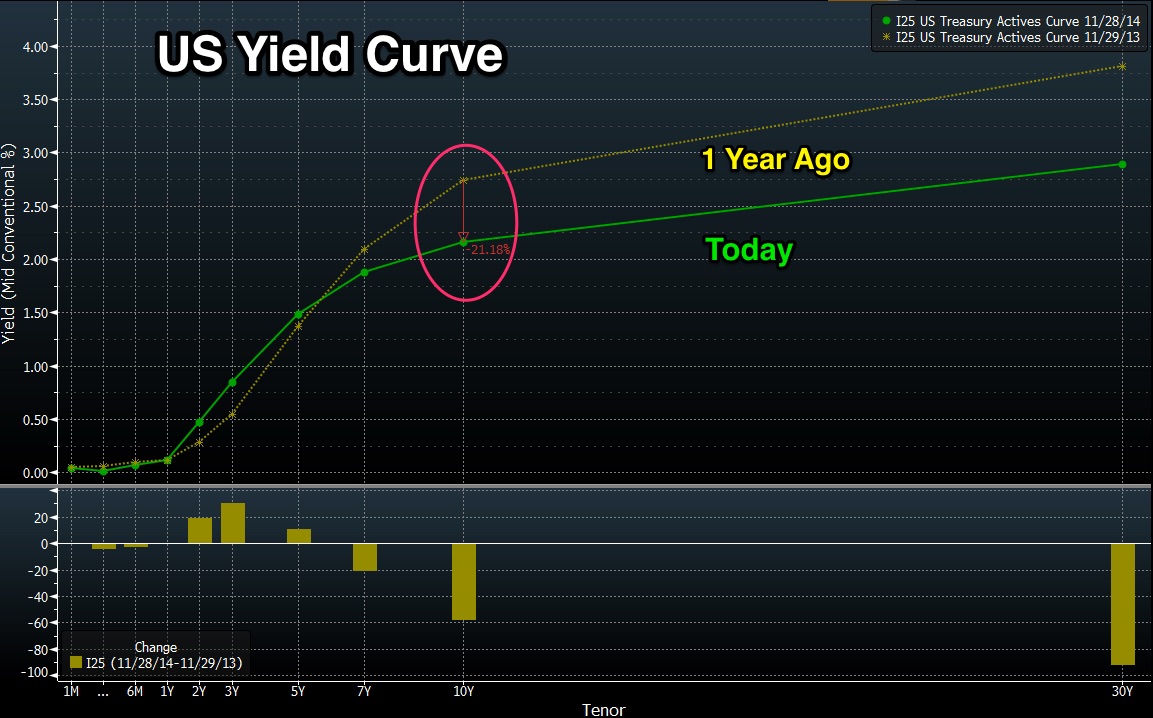 With GDP forecasts for 2015 only slightly better using a rifle rather than a shotgun seems like a better approach for security selection. Alpha Select still sits ahead of the S&P 500 YTD but it’s been no easy task. The sector and market swings have been difficult to navigate with most funds and portfolio managers sitting under their benchmark. An overweight or even equal weight allocation to Energy stocks pretty much dashed your hopes for a descent year.

Where Do We Go From Here? 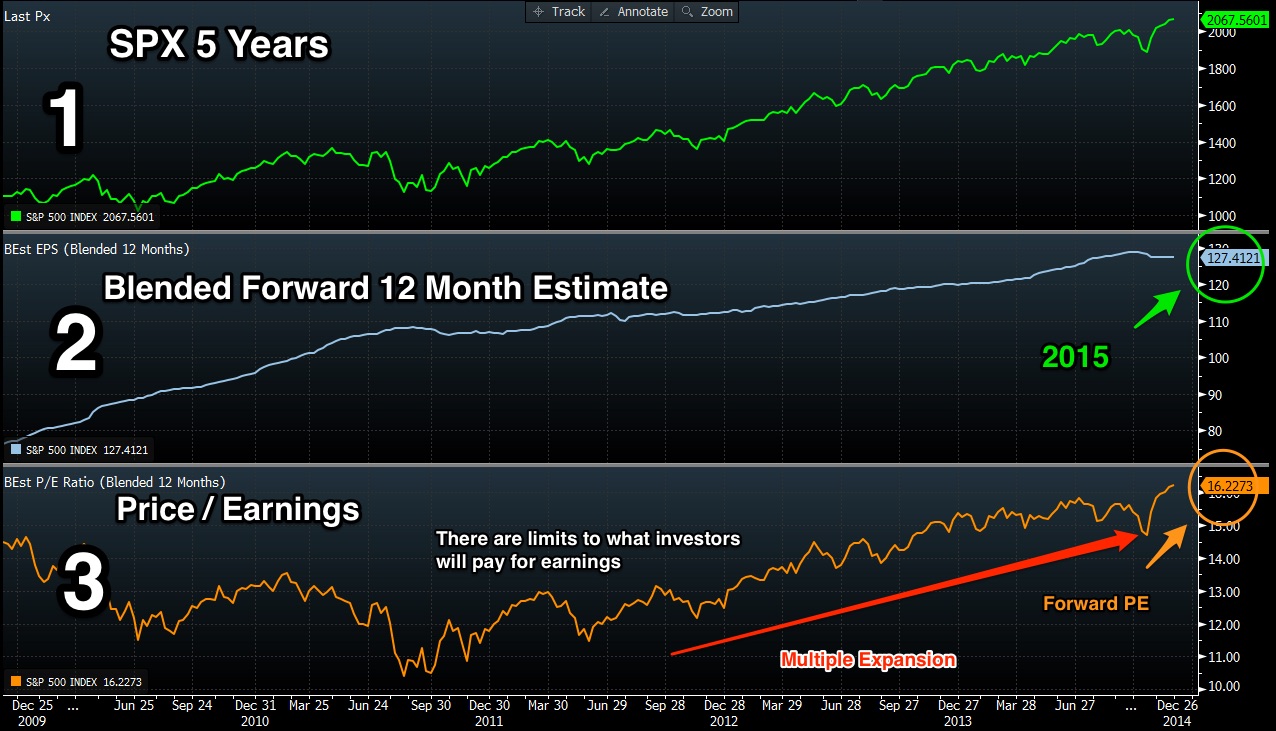 Earnings and estimate revisions are the ultimate driver of equity prices. Stock prices have steadily pushed higher on the back of those earnings but that’s not the whole story. Since the end of 2011 the S&P is up well over 60% yet on a trailing basis earnings are up just 23%. As you can see in the lower panel of the chart above the PE (Price Earnings) or the amount that investors are willing to pay has risen as well. There’s no limit to how high the first two charts can go but I assure you there is a limit to the third.

It’s clear a big part of the rally has been due to multiple expansion. Can multiples push higher from here? Sure they can and right now each multiple point higher adds about 130 points to the S&P. However, there are limits and with the prospect of interest rates eventually moving higher the wall may be closer than we think.

I believe we are in a secular bull market but the delta or rate of change is slowing. To meaningfully breakout and launch the next leg of the bull market we need something dramatic that can accelerate the E in PE. It could come from almost anywhere. Certainly the fall in oil prices could be a stimulus. Goldman’s Global Investment Research team put out a note last week saying, every $10 per barrel fall in price increases 2015 EPS by $2 per share…

A better more sustainable choice would be a rise in CAPEX (Capital Expenditures). It’s understandable that CEO’s would pick the low hanging fruit using Stock Buybacks to goose earnings. However, financial engineering is a two edged sword offering diminishing returns. One look at IBM shows you the end game in financial engineering. Companies that focus on Stock Buybacks often do so at the expense of R&D (Research & Development) as well as CAPEX. 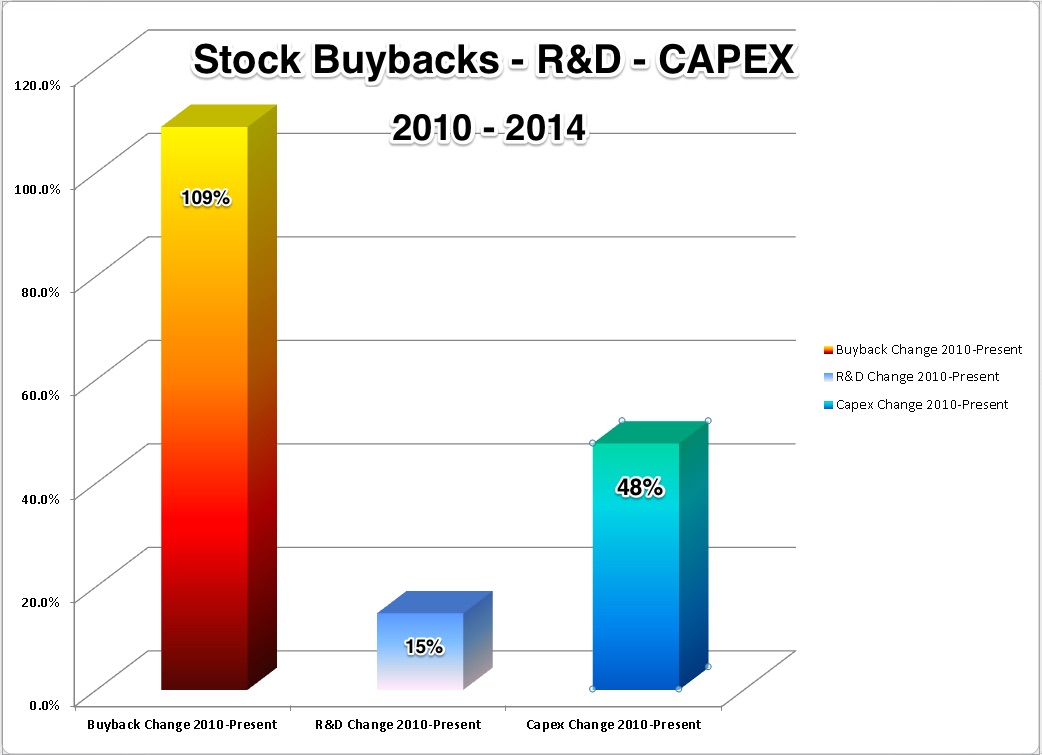 Buybacks have steadily climbed since 2010 now up 108% with CAPEX and R&D up just 48% and 15% respectively. Growth needs to be fed with new ideas, new products and new factories. Along with that we just may get some new high paying jobs.

The Good the Bad and the Ugly

On a realized basis the top 3 winners for Alpha Select were a partial sale in SCI (SCI Systems), a full sale of Avago (AVGO) and a full sale in Disney (16%). All 3 are repeat winners but have fallen in our quant model. We’ll look for better entry points or catalyst to re-establish positions.

It was hard to get through November without a loss in energy and we had ours. Halliburton (HAL) was sold for a (-10.3%) loss on the heels of their decision to purchase Baker Hughes (BHI). I published an article the day it was announced and voted with the sale of all stock.

Also in the realized losing column was a sale in Foot Locker (FL) down (-7.2%). Also sold were full positions in Verizon (VZ) and Capital One (COF) both near the flat line.

The Gold Medal Winner for November was our position in Southwest (LUV) up over +21% and now up close to +48% since its purchase in early August. The Silver and Bronze go to Apple (AAPL) and Intel (INTC) up +10.1% and +9.5% respectively.

Only 3 stocks in Alpha Select portfolios were down for the month and all less than 1%. (CMI, NUE & GS)

As we head into the twelfth and final round, Santa Claus Rally cheerleaders will be all the rage on your favorite financial news show. But with October still fresh in our memory, I’m not taking anything for granted.

Performance reported is not GIPS compliant and has not been audited by a third party. Policies for valuing portfolios, calculating performance, and preparing compliant presentations are available upon request. Data as of 11/30/2014.

← The Death of OPEC Big Blue – The Emperor Has No Clothes →