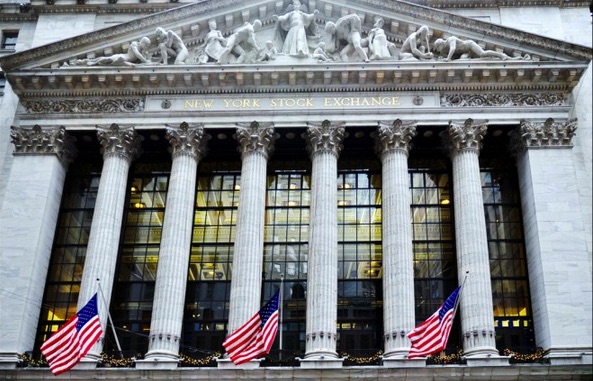 In a near repeat performance of last year’s kick off, the S&P ended the month falling close to 3%. Also, just like last year the only two sectors to end in positive territory were Utilities and Healthcare.

Alpha Select our total equity model fared better than the benchmark down 1.98%. Click Here for profit & loss on all Alpha Select Transactions for last 2 years

The Wall of Worry

Like every year investors will need to navigate both challenges and opportunities to chart a successful path through 2015. Falling rates, falling energy prices and a rising dollar are the latest building blocks to the wall of worry. All three can be spun in a positive or negative light.

Investors are asking if a rising dollar will end up being a blessing or curse? While there are clear positives associated with a strong currency the strength of the U.S. Dollar is taking its toll on earnings. Goldman’s strategy team headed up by Amanda Sneider and David Kostin put out a note late last week showing 87% of companies reporting have guided below consensus for next quarter.

That’s a big number and on numerous conference calls management teams are pointing to the rise in the dollar as a future drag on earnings. Of course, this can also be a great hiding place for CEO’s using it as an excuse to mask poor execution. The translation effect from a stronger currency is a headwind for most multi-nationals which dominate the S&P 500.

To be sure there are benefits as well. Lower cost of goods sold and lower commodity prices including energy which is priced in dollars are a clear positive.

A stronger dollar isn’t always bad news. The 90’s was a period of enormous equity returns all taking place during a strong dollar rally.

However despite these positives the chart comparing the SPX to the U.S. Dollar from the start of its breakout in July last year can’t be ignored. Since that time, the SPX is only up a little over 1%. For now, estimate revisions and management guidance seem to be an investor concern that is showing itself in equity prices.

What are Bonds Telling US?

Is the strength in bonds telling us that the U.S. economy is headed into recession or something different? After all, if bond investors are willing to tie up money for 10 years ready to accept a meager 1.64%, you have to ask why? 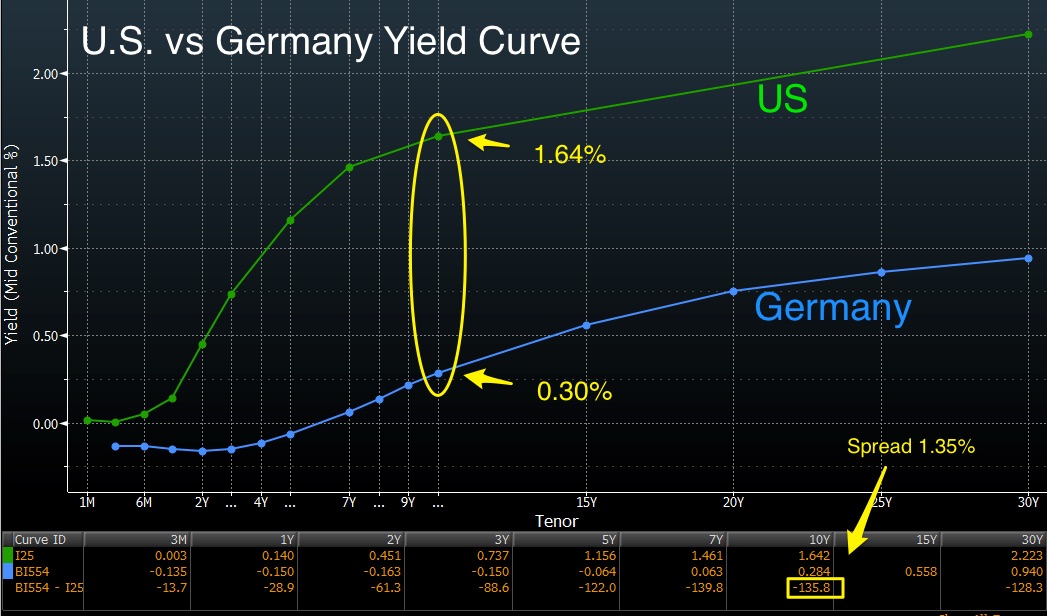 As I’ve pointed out on several occasions I believe the biggest factor pushing U.S. yields lower is Europe. The weak economy along with a plummeting Euro is driving their yields lower acting as an anchor for ours. The Yield spread between a U.S. 10 Year Treasury and its German counterpart is now 135 basis points or 1.35%. The relative yield pick up here keeps a strong bid for U.S. Treasuries.

While the economic data isn’t what I’d hoped the brightening employment picture along with rising consumer confidence points to equities as the superior asset class. With an almost 2% yield, investors are being paid to wait. 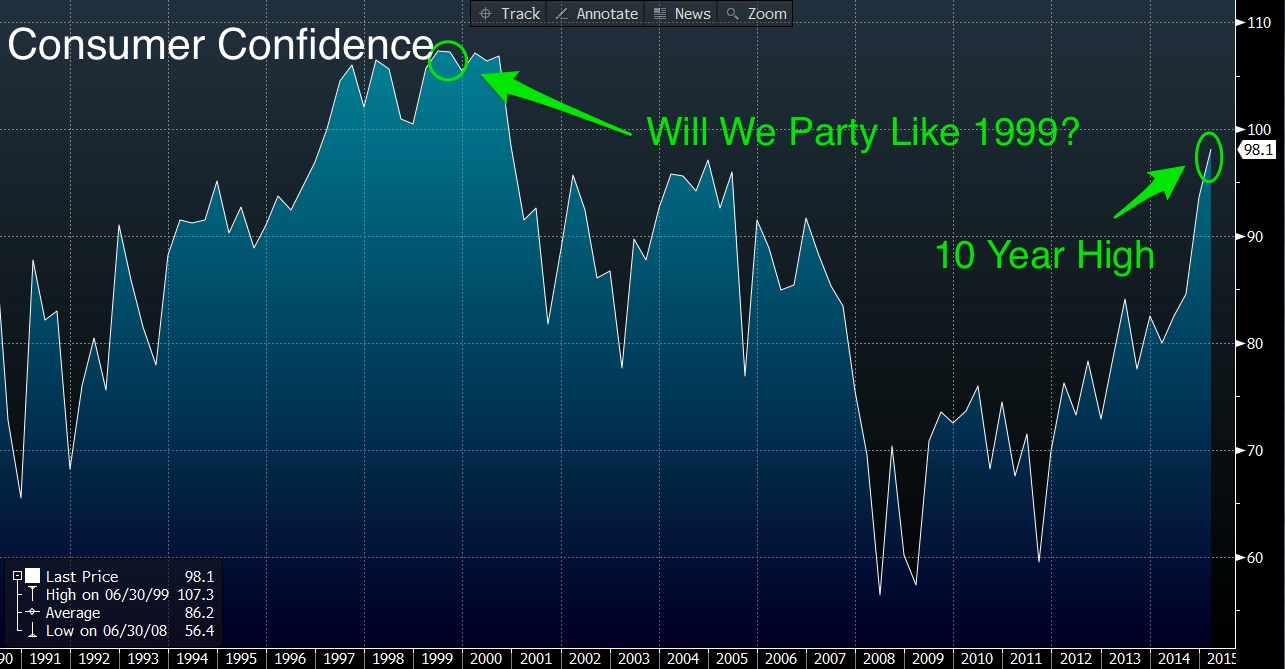 Energy has been the number one hope and concern for investors since the middle of last year. In my series Oil & the Black Swan I pointed out some of the challenges and benefits of lower oil prices. While I fully recognize there are both economic and geopolitical concerns that can’t be ignored, ultimately the world will learn to live with lower energy prices. The economic benefits are too great to be ignored. However, the speed with which prices have fallen does create both geopolitical uncertainty and near term financial pressure for some sectors of our economy.

At the top of the list of concerns is energy companies who’ve seen their earnings, revenue and equity prices fall dramatically. With a 9% weighting in the S&P it adds to the index pressure. The damage isn’t just limited to the companies themselves. The banking sector has exposure with some banks having close to 20% of their leveraged loans in energy. In addition, about 16% of the high yield market is exposed to the sector.

Already some energy firms are slashing thousands of jobs with more carnage on the way. Even if OPEC decides to reverse course it’s clear that new technologies have increased the production of oil and natural gas. The actions of OPEC choosing not to cut production have until recently accelerated the fall in the price of crude. Several of the majors have already announced significant capex cuts. It’s important to remember that when oil finally does rise, some of that lost production is likely to come back online. In addition, alternatives will increasingly play a role in our energy grid.

OPEC has its own internal pressures. With most governments being forced to pump full out to support social programs and ballooning budgets their role as a swing producer is likely reduced.

I have no idea where oil will bottom. However, I believe the trading band has made a secular shift to lower prices. Even Saudi Prince Alaweed bin Talal told the press and media “we will never see $100 oil again.” We shall see. 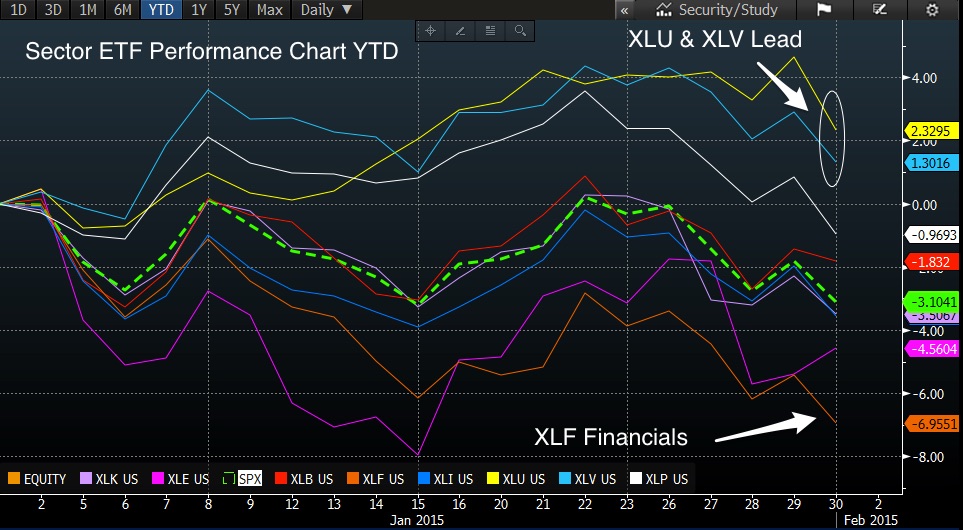 True to the January Redux theme Utilities once again were the best performing sector followed by Healthcare. Utility performance is of course being driven by the dividend yield. When the interest rate cycle turns this will be the hardest hit sector. For now it is the safe haven.

The First to Fall

With profit centers being systematically stripped away, banks will have to find new ways to increase the top and bottom line. Alpha Select dumped all bank exposure prior to the start of earnings. While they are no longer growth stocks, at the right price they will find their way back into the model. The banks were the first to fall but I think it’s important to point out the financial sector is going through a secular downshift. The grip of Washington along with massive regulation has made them more like regulated utilities. My article Buying a Bank? from early last month spoke to some of the challenges the industry faces. They have the same tickers and familiar logos but they sure aren’t the same companies from years’ passed. The chart from Factset displaying sector surprises shows why investors are concerned. 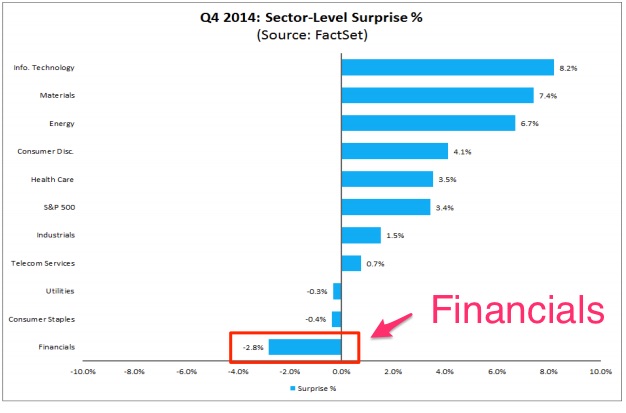 Technology still remains our biggest overweight with Apple (AAPL) our biggest position in the sector. There is of course an entire ecosystem built around the Cupertino Company. The significant bottom line beat didn’t disappoint sending its shares higher up over 9% on the month.

Finding the bottom in energy stocks has been a difficult task but we’ve tried once again building positions in Valero (VLO) and Schlumberger (SLB) both in positive territory since acquired. Refining is one of the safer ways to play energy in that the price of the commodity is of less concern. Valero’s (VLO) fourth quarter report was a positive surprise showing they are well positioned in the refining space. The oil service giant Schlumberger (SLB) offers a higher risk/reward profile. However, its low level of debt and diversified revenue stream hopefully gives them enough shelter to weather the storm. 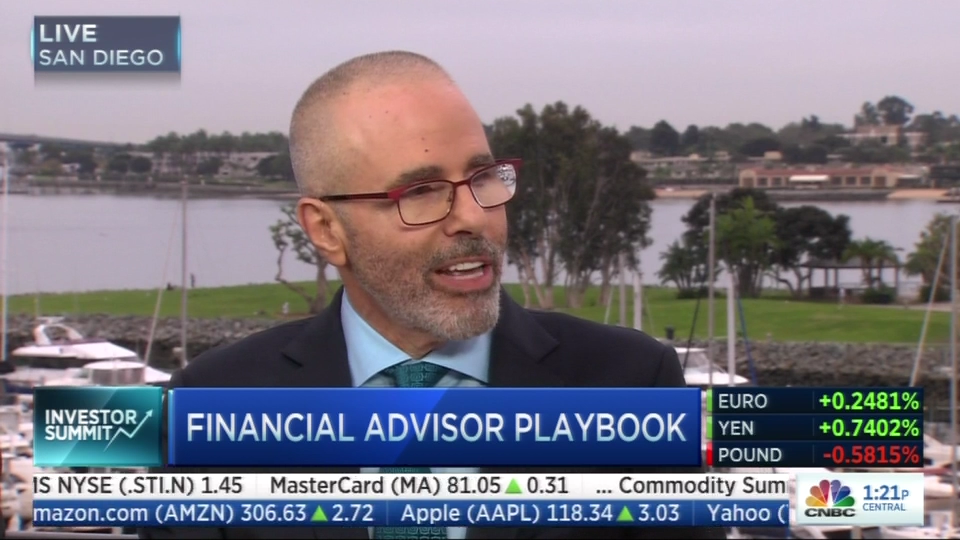 Last week I attended the TD Ameritrade Conference and I sat down with CNBC anchor Amanda Drury to discuss the markets and trends within the industry. I told her that earnings revisions are a big part of the investment process. I went on to say that 2015 estimates are likely to come down for some of the reasons mentioned above. This of course puts pressure on my 2015 target of 2250 for the SPX. It’s still only the top of the second inning so for now, time is on my side.

As always please feel free to call with any questions.

Performance reported is not GIPS compliant and has not been audited by a third party. Policies for valuing portfolios, calculating performance, and preparing compliant presentations are available upon request. Data as of 01/31/2015.