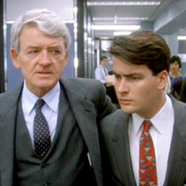 “Man looks into the abyss…”

“Man looks in the abyss, there’s nothing staring back at him. At that moment, man finds his character. And that is what keeps him out of the abyss.” – Lou Mannheim from the movie Wall Street

After staring into the August – September Abyss investors collectively found their character pushing the S&P 500 within 3% of an all-time high. October’s performance was stunning especially in the face slowing global growth. More evidence of the slowdown came over the weekend with the release of the China PMI showing their economy is still contracting.

It’s pretty clear investors are looking through the economic malaise to next year where current estimates indicate 10% growth. The $64,000 question (giving away my age on this one) remains; will they continue to bid up stocks without hard evidence the global economy is on the mend?

We’re well into third quarter earnings reports exposing a huge divide between winners and losers. For every Amazon (AMZN) or Google (GOOGL) there was a Walmart (WMT) and Western Digital (WDC).

Some industries are experiencing secular shifts too powerful to be denied. Brick & motor stores seem to have morphed into little more than showrooms for Amazon (AMZN) which reported a stunning 23% growth in sales last quarter. The Amazon effect continues to hobble traditional retailers and was the likely cause behind Walmart’s guide lower due to rising labor costs as well as their admission they need to invest heavily to expand online presence.

We see this same bifurcation within the industrial complex. Caterpillar (CAT) and Joy Global (JOY) are exposed to a weakening China while Boeing (BA) enjoys a secular tailwind as the demand for commercial aircraft continues. Transports reveal more of the same. Rail shipments of coal and oil continue to decline while airlines celebrate the fall in energy prices adding to their bottom line.

What does all this mean?

Stock investors should focus on companies with a secular tailwind or a company specific catalyst. The tide isn’t likely to lift all boats until global growth returns. 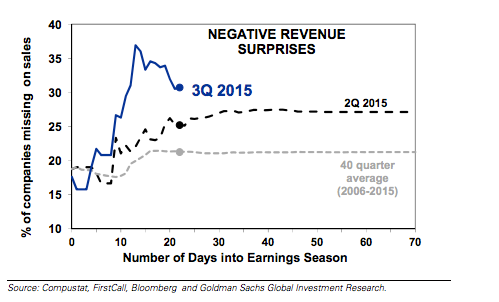 Investors face a series of challenges as they wait for fundamentals to catch up with market performance. Sales or lack thereof are becoming an increasing problem according to Goldman’s economic team. The number of companies missing on the top line is on the rise. Many are able to hold up earnings with buybacks but there isn’t a lot you can do to boost revenue when organic growth just isn’t there, especially in the face of a rising dollar.

The will she won’t she Fed continues to do their best to confuse investors. Wishing to not repeat the dismal market reaction to the previous statement last week’s commentary from the October meeting put December back in play. Granted the odds are slim but if data is supportive they stand ready to act.

GAAP vs NON-GAAP – Are we at the tipping point?

Readers have followed my commentary through the years and my growing concern of the reliance of U.S. companies and their investors on NON-GAAP earnings. To the uninitiated GAAP stands for (Generally Accepted Accounting Principles). It’s an oversimplification but management often points investors to Non-GAAP earnings which exclude the cost of stock option compensation along with other items that might drag down results. As the share count rises firms have to devote ever increasing amounts of capital for buybacks to prop up earnings. All of this of course comes at the expense of R&D and Capex.

The issue is now hitting the mainstream press. Gretchen Morgenson’s recent New York Times article on Valeant (VRX) speaks to some of the problems associated with NON- GAAP accounting. The debate has been with us for the last couple of decades. The question today is; “have we hit the tipping point?” Have management and the analysts that follow them pushed the envelope too far with a shareholder backlash all but inevitable.

The Technology Sector has long been dependent on NON-GAAP accounting. For some companies like Salesforce (CRM) the difference between GAAP and NON-GAAP is the difference between profits and losses. Analysts currently project the cloud giant will report $0.19 per share for the third quarter. The real or GAAP number will look a lot more like a loss of a penny (-$0.01).

The boring world of accounting doesn’t matter until it does. Valeant (VRX) is this year’s poster child with shares falling more than 50% in just 2 months. Friday’s conference call hosted by Hedge Fund darling Bill Ackman defending his position did little to help the stock which ended up down 16% on the day. Phrases like “phantom revenue” or my favorite from Valeant CEO Mike Pearson, “I think it is legal…” when describing their zero strike price option for Philidor, do little to instill confidence in the hearts and minds of investors.

Once you lose faith in the numbers, there’s only one choice.

*At the time of this publication funds managed by David Nelson owned AMZN, GOOGL and BA

← Why Angela Merkel is heading to China Debt Collection – You Have Rights! – Fox News Interview →