Home » Investment Management » Why Growth is Killing Value – What it means for 2016! 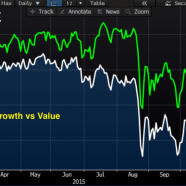 The S&P 500 is up modestly year to date but the action beneath the surface has investors feeling like heroes or zeros depending on their latest stock pick. This bifurcation is easily seen when comparing S&P 500 Value stocks (IVE) with its growth counterpart (IVW). Investors continue to crowd into a dwindling inventory of stocks still able to organically grow the top and bottom line while others rely on financial engineering gimmicks to prop up earnings.

Amazon vs. IBM – Amazon (AMZN)* continues to invest hand over fist to grow its top and bottom line while (IBM) spends over $13 Billion annually buying back stock to prop up earnings. One has a multiple in the stratosphere while the other has a PE of less than 10. IBM says it’s moving to the cloud while Amazon is the cloud. I think it’s pretty clear investors don’t care how cheap your stock is if you aren’t growing.

2014 data shows about 100 companies in the S&P 500 spent more than 90% of their Free Cash Flow buying back shares. Of course all of this comes at the expense of R&D and CAPEX. If you don’t invest in the future eventually you become irrelevant.

The Fed has been complicit in the current wave of financial engineering. A prolonged Zero Rate Interest Policy (ZIRP) has had unintended consequences. Cheap debt has been an irresistible tonic for CEO’s anxious to meet stock compensation goals. Leverage lets you buy back even more stock and of course works right up until it doesn’t. I think the spread between growth and value is saying the jig up and it’s time for these companies to start investing for the future before it’s too late.

Wall Street has been singing the praises of stock buybacks for as long as I’ve been in the business but the winds seem to be shifting. Earlier this year, Merrill Lynch Quant Strategist Savitha Subramanian pointed out; “The efficacy of buybacks has been waning, whereas the few companies spending on growth have been generally rewarded.”

In April, BlackRock CEO Larry Fink sent a letter to CEO’s talking about the dangers of a short term approach solely focused on buybacks and dividends.

Once again, the S&P 500 is right up against resistance and nothing less than a breakout to new highs on big volume will convince traders the coast is clear. However, even if we get the breakout bulls are hoping for the only way to sustain it is for more companies to participate. And the only way that’s going to happen is more CEO’s managing with a horizon that goes out further than 12 weeks.

*Funds managed by David Nelson were long (AMZN) at the time of this publication.