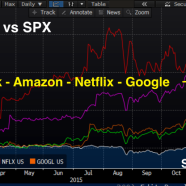 By David Nelson, CFA
2015 will end the year frustrating both bulls and bears. Unable to sustain a breakout in either direction, trends were tough to come by and most couldn’t sustain themselves long enough for investors to jump on board. While the S&P looks to come in about flat for the year one look below the surface shows cracks in the facade.

With investor angst at highs here are:

5 questions investors want answered before adding money to the market?

Jim Cramer likes to say “it’s always a bull market somewhere” and most years that’s true. I like to narrow it down a little further believing there are always some stocks in a bull market with real growth and or value to offer shareholders. Despite concerns about earnings and a host of other issues 2016 should have its share of opportunities for investors.

Market predictions are fraught with uncertainty as most made from last year including yours truly didn’t pan out as predicted. It’s the time of year when strategists look into their crystal ball coming up with an earnings estimate for the S&P 500 and then assign a multiple to those earnings giving you a price target. Markets are a living breathing animal so other factors like quality of earnings, interest rates, and political uncertainty all weigh on the final outcome.

Tell me who the President will be, the price of oil at year’s end, the direction of the dollar, the frequency of terror threats and whether CEO’s will stop taking the easy way out and I’ll give you my year end prediction right now. Unfortunately, that crystal ball looks a bit cloudy.

* At the time of publication funds managed by David Nelson were long FB, AMZN and GOOGL