Are early signs of inflation signaling a market bottom?

Posted by David Nelson, CFA on February 1, 2016 in Investment Management | Leave a comment

From the depths of the financial crisis we’ve been told deflation was an enemy that could push world economies to the edge of the abyss. Former Federal Reserve Chairman Ben Bernanke made it his lifelong study and today central banks everywhere follow his path.

The retraction in China along with new technology fueling a massive over supply of oil has been a leading contributor to low inflation as energy costs cut across nearly every sector of the economy. If deflation is the enemy then it begs the question; is inflation the savior?

After one of the worst starts in memory markets closed January on a high note with both the DJIA and the SPX (S&P500) ending the month with back to back weekly gains. An oversold bounce, certainly but with recent signs of capitulation and the NYSE Bullish Percent Index close to going green the price action warrants further investigation. 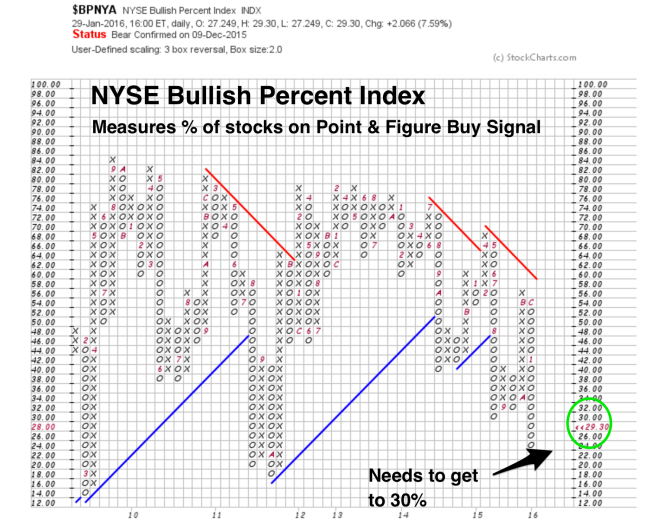 Economic data hasn’t been supportive and Friday’s advance GDP report coming in at just 0.7% only adds to the concern. We’re about half way through earnings season and the results are mixed at best. Goldman’s David Kostin points out that we’ve seen our share of hits and misses but “estimate revisions have been broadly negative.”

However, behind this negative backdrop one by one we are seeing early signs, green shoots if you will that inflation is trying to make a comeback. Gold (GLD), TIPS (TIP), Oil (XLE), Copper, Bloomberg Commodity Index and yes even the S&P 500 have moved higher in recent days seemingly in unison.

Gold has been in a downtrend for years disappointing Gold Bugs sending a series of false signals that it was about to breakout. However, today it is happening in conjunction with a basket of other commodities attempting to put in a bottom. Admittedly, this is very early and a trend if there is one isn’t well established but it is worth watching.

Oil – I’ve talked about the importance of oil in past articles even referring to crude as a potential Black Swan. We’ve already seen the first wave of bankruptcies and its potential to spill over into other sectors of the economy is high. JP Morgan (JPM) & Wells Fargo (WFC) both have pointed to concerns surrounding their loans to the energy complex.

IMHO the market isn’t capable of any meaningful move higher without at least stabilization in the world’s most important commodity crude. The recent spike comes on the heels of rumors out of Russia that they are willing to have meaningful discussions with OPEC on curtailing supply. Any deal is going to have to have IRAN onboard which would be tough given how anxious they are to ramp up production after years of sanctions.

TIPS – Treasury Inflation Protected Securities – (TIP) iShares TIP Bond Fund is on the move and again this is happening in conjunction with an attempted bottom in crude and gold. (TIP) has the most supportive chart at least taking out near term resistance breaking the trend line. Of course the other dynamic is interest rates which have been in a steady downtrend for months. The rest of the commodity complex including Dr. Copper still have a lot of work to do but in recent days are heading in the right direction.

The lack of wage growth here in the U.S. has long been a concern and many economists believe an imperative for inflation to move higher. Lack of wage growth dominates the political rhetoric on both sides of the aisle but I believe misses the mark. There’s certainly a cyclical and political dynamic to wage inflation but there’s a secular component as well. As long as there’s someone on the other side of the planet willing to do your job for less money it will be difficult for wages in your industry to rise. Someone once said: “if you want wage protection become a plumber. You can’t outsource your plumbing.”

Look, admittedly there isn’t enough data to come to hard conclusions and two weeks does not a bull market make. Friday’s large move to the upside was in part fueled by short covering so some give back early in the week won’t be surprising. Market bottoms are a process and usually seen in the rear view mirror but for now, I’m going to respect this attempt at stabilization and give it time to pan out.