Home » Investment Management » 2016 – The Point of No Return 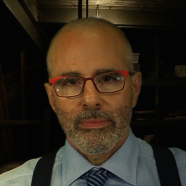 Posted by David Nelson, CFA on July 4, 2016 in Investment Management | Leave a comment 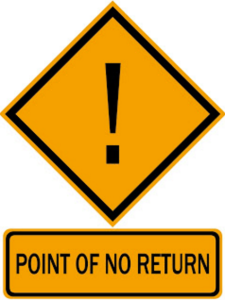 As the soldiers of Wall Street return from a 3 day leave I find myself reflecting on the 6 month journey to the halfway point of 2016. Out of the gate we dove to the February 1810 S&P 500 (SPX) low followed by a quick move back to the highs only to get hit by a surprise BREXIT vote that some believe is a Black Swan event.

While helpful and cognizant of the fact that “past is prologue” the road ahead is more important than the one left behind. With a world in turmoil it’s safe to say visibility is poor and portfolio pilots will need to tap all resources to bring the aircraft in for a safe landing.

Here we are just 4 trading days after the Brexit Plunge and markets at least here in the US look like it never happened. No matter how you slice the numbers, the UK’s FTSE has beaten most of its European counterpart’s year to date in Sterling, Euros and even the US Dollar.

David Cameron’s decision to hold a referendum vote on leaving the EU will go down as one of the great political blunders of our time. Thinking it would finally put to rest a rising populist tide, it backfired and opened a Pandora’s Box that could sweep the continent.

The mechanics and timing may render the outcome a BREXIT in name only. Before the process can unfold, Article 50 has to be invoked. I’m certainly no expert on EU regulations but it appears only Britain can start the ball rolling. Prime Minister Cameron who resigned within hours of the vote has insisted this is a job for his replacement.

Bloomberg reports that Jeff King, a senior law lecturer at University College London said there is support in the legal and academic communities for the idea that only Parliament, as the U.K.’s legislative body, has the power to invoke Article 50. In any event, while Britain’s exit and a weakened EU are problematic for markets I believe the BREXIT vote to be more a political statement then an economic event.

I wish I could say the coast is clear but investors have at least 4 roadblocks to circumvent in the back half of the year.

When CEO’s can’t deliver on revenue and earnings there’s no better scapegoat then the U.S. Dollar. The dollar spiked hard as the British Pound fell to 30 year lows immediately following the decision. While the Brexit spike is troubling and a bit of a challenge for large multi-nationals I’d like to point out that the U.S. Dollar (DXY) is just about where it was a year ago. 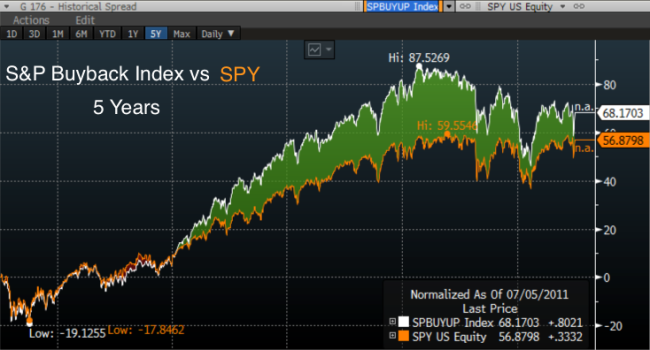 Stock buybacks have been the rage for the last 5 years. Investors cheered every announcement bidding up prices following each authorization. Hopefully, CEO’s that steadily relied on buybacks and other Financial Engineering gimmicks are getting the message that it just isn’t holding up stock prices anymore. This can be easily seen in the S&P Stock Buyback Index (SPYB) vs the S&P (SPY) comparing a 5 year and 1 year performance chart.

Buybacks are offering diminishing returns and investors are starting to notice. You can’t keep growing earnings with flat to declining sales. At some point you run out of ammunition and I think for many that time is NOW! I’m repeating myself I know and most of my readers and followers are probably sick of it but here it is; “Stock Buybacks come at the expense of R&D & CAPEX. The next leg of the bull market has to come from re-investment back into the company and in turn an investment in America.”

Thematic investing has worked well this year. In hindsight Utilities and Staples have been best as every attempt to normalize rates has been met with a market temper tantrum or weak economic data spooking the Fed into pushing off the inevitable. The dividend rich sectors have been a safe haven for those looking for nothing more than a 3-4% return. They got the dividend and a lot more as both sectors lead in market returns year to date. Believing the envelope was being pushed too far with valuations stretched for companies with essentially little or no growth I’ve been underweight or in the case of utilities out for most of the year. A mistake, so far yes but so was avoiding internet stocks in late 1999. They had their best run in a 2 month sprint to the March 2000 peak. We continue to look for investments in these sectors but to date have only found a few.

Not all safe haven plays have been yield stocks. The Defense Industry has been a powerful theme for us as holdings like Lockheed (LMT), Northrop Grumman (NOC) and L3 Communications (LLL) have performed well and look good into an election cycle where I suspect the eventual winner regardless of party will increase spending in the years ahead. One glance at a newspaper is all you need to come to that conclusion. My only concern is that the trade is getting crowded as talking heads are tripping over themselves to recommend the shares.

Tech will be problematic and as always will have its share of winners and losers. The slowdown at Apple (AAPL) has challenged companies that are a big part of the mobile revolution. Apple is certainly cheap and is attempting to morph into more of a service company hoping to reduce the cyclicality of its earnings stream. Over time, I suspect they will succeed but understand the history of electronic device companies isn’t good. Needless to say it is a high quality company I keep on my A page looking for a catalyst to jump back on the train.

Healthcare has always been an important theme for me considering the rising need of my generation of baby boomers. Biotech has been the hands down winner over the last 5 years up over 140%.

However, this is pale in comparison to where it was just a year ago losing over 34% since last year’s peak. The Healthcare Sector as a whole (XLV) has held up better with stocks like Johnson & Johnson (JNJ), Pfizer (PFE) & United Healthcare (UNH) doing much of the heavy lifting.

If I had to point to one issue I would say the rise of biosimilars in the biotech industry is much like the challenge faced by large cap pharma due to rising generic competition. Never the less while there are opportunities within healthcare, it is no longer the slam dunk it was in year’s past.

At the start of the year most strategists are asked to make year-end target predictions and shine a light on the path forward. I couldn’t do it earlier this year when I put out 2016 – The Road Ahead and with no shortage of challenges on the horizon I certainly can’t do it now. The one prediction I made that held up was the following;

Halfway through the year I think it’s safe to say the message rings true. The only thing certain about the road ahead is that we’ve hit the point of no return.