Home » Investment Management » It’s too late for the Fed to raise rates: Here’s why

It’s too late for the Fed to raise rates: Here’s why 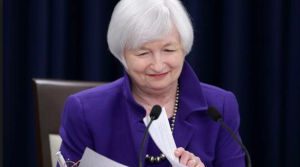 The dangers of keeping rates abnormally low for too long have been well documented by economists, strategists and portfolio managers from the buy side to the sell side including commentary from yours truly. IMHO the Fed missed their window as far back as late 2013 when they could have hiked into a rising GDP approaching 4% and a raging bull market in U.S. Stocks.

That’s water under the bridge but it begs the question; “Is it too late for the Fed to raise rates today?”

For the last few weeks I’ve been publishing articles along with several media appearances about the role oil has played in the market (SPY) recovery off the February/March lows. The discussion has also focused on the importance of oil not breaching key support levels that could trigger selling in both equity and high yield debt markets.

While it’s possible to sustain a bull market with financials lagging the broad index the bull dies quickly if the banking sector becomes unstable as concerns mount once again about loans to the energy complex. As a reminder, CEOs Jamie Dimon of JP Morgan (JPM) and Brian Moynihan of Bank of America (BAC) drove the point home earlier in the year when they had doubts about the energy loan books.

Problems in equity markets usually show up in the debt markets first. The two charts above and below comparing both Halliburton (HAL) & Morgan Stanley (MS) 5Y Credit Default Swaps to Oil shows investors weren’t only concerned about the health of the oil community but the banking sector as well.

Six months later, oil is rocking and U.S. Stocks sit close to all-time highs. The Job market has been strong and there’s even early signs of wage inflation so it seems plausible for one to conclude the coast is clear for the Fed to hike.

While there’s an endless number of factors that drive oil prices including supply/demand, political uncertainty, technology and speculation, one factor that can’t be ignored is the strong negative correlation between oil (USO) and the U.S. Dollar (DXY).

It’s true the inverse correlation isn’t the driving force it once was, especially on the heels of the shale revolution which has dramatically reduced the need to import oil. However, a rising dollar still has the ability to curb oil prices on the global stage.

The chart comparing WTI Crude to the U.S Dollar over the last few years shows a number periods where oil and the dollar were headed in opposite directions.

This of course brings us to Chair Yellen and the Fed. A series of hikes even well-spaced apart would have the likely effect of lifting the dollar accelerating as foreign funds were attracted to our shores.

A rising dollar creates a negative dynamic in 2 ways

The benefit of rising rates to net interest margins in the banking community might be dulled as problems in their energy loan books as well as high yield markets might be an offset. Recently, banks have been able to start releasing reserves on bad debt in the wake of higher crude adding to earnings. If oil prices revisit the lows, then reserves will have to be added once again cutting into the bottom line as the year unfolds.

If it’s too late what will they do?

They will do what they always do. Chair Yellen will jaw bone the press with vague commentary about how the economy is getting better believing rising interest rates are appropriate in the future with the inevitable get out of jail free statement “we are data dependent.”

They will continue to drag on the normalization process as long as possible hoping as we move from one administration to the next, monetary policy passes the baton to fiscal policy. Truth be told this may be the only plan left so let’s hope it works.

Later in the week Chair Yellen will be speaking from Jackson Hole as all eyes once again will be looking to Janet for clarity on the Fed’s timetable.

The commentary will be about as clear as mud followed by a parade of governors each expressing their own point of view to members of the press. The broadcast media will dedicate segments to analyzing the speech looking for a sentence even a word that offers some insight into next steps for the Fed. Good luck with that.