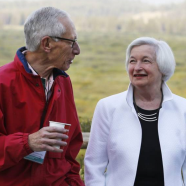 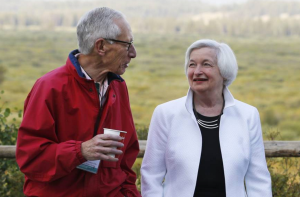 Even the press are starting to refer to the Fed’s annual trek to Jackson Hole as little more than a circus. (Barron’s: Fed’s Jackson Hole Circus) I said in last week’s post the commentary will be about as clear as mud followed by a parade of Fed officials each expressing their own point of view…

That’s just what we got. Take a look at Friday’s action in a series of asset classes to get a first-hand look at how markets reacted to the Fed’s attempt at transparency. At first U.S. equity markets embraced the release of Chair Yellen’s text where she stated; …I believe the case for an increase in the federal funds rate has strengthened in recent months.

However, a short while later Vice Chair Stanley Fisher spoke to CNBC’s Steve Liesman implying that September is very much on the table pushing expectations up sharply for not just one hike this year but two. Right now we’re barely hanging onto 1% GDP growth so to get to 2% we’re going to need to see 3% in the back half of the year.

Same reaction by the treasury markets above. After some brief confusion bonds lifted pushing rates lower but as Fisher’s commentary went on you can see that rates started to back up moving higher for most of the day. In the chart below you can see 10 year rates are attempting to break out from a slide that first started back in 2014.

The Dollar (DXY) followed rates higher while safe haven trades like Utilities (IDU) put in one of its worst days since April down nearly 2% by the close. The move lower makes sense given that probability of a Fed hike in September has jumped to 42% up from just 18% earlier this month.

My point isn’t that they shouldn’t have opinions that differ with the Chair but this endless barrage of communiques in a feeble attempt at transparency only shows that they are more confused and uncertain then we are. Not exactly a confidence builder.

Having missed their window to raise rates as far back as late 2013 when GDP was stronger, they are stuck with the unenviable task of trying to give themselves some buffer room to act in the event of a recession. It’s pretty clear that the terminal rate will be far below previous cycles but the pace at which we get there is the bigger issue.

If you take Chair Yellen at her word they may not even have to lower rates to fight off the next crisis. In her speech she talked about tools that could expand the Fed balance sheet by another $2 Trillion and even the… “Possibility of purchasing a broader range of assets.”

The endless stream of consciousness commentary from the Chair and any number of Fed officials stepping up to the microphone may be doing more harm than good. In 2011 the Fed’s own communication policy stated that Fed officials should refrain from voicing their own views to the press. In 2015 that policy directive was changed, probably because no one was obeying the rule.

To their credit, the Fed recognizes the importance of monetary policy handing off the baton to fiscal policy. Unfortunately, congressional inaction and a partisan approach to politics from both sides of the aisle have crippled those efforts.

Despite my misgivings, our Fed looks like a bastion of sanity when compared to central banks around the world which continue to embrace negative rates as a cure to a struggling global economy. I’m sure this weighs on the Fed’s decision making process knowing that each push higher in rates widens the interest rate gap between us and other developed economies like Germany and Japan as well as unwanted moves higher in the U.S. Dollar (DXY).

As far back as 2010 Bloomberg ran an article on polls showing more than 1/2 of the U.S. wants the Fed curbed or abolished altogether. Given some of the recent rhetoric today’s numbers might look worse. Abolishing the Fed isn’t the answer but a re-think about the ever expanding list of mandates deserves a hard look.

If they don’t, the independence of the Fed could well become a policy from the past. Today, both parties have Fed reform in their platforms and serious action may come early in the next administration. Democrats have pointed to the lack of diversity within the system. Republicans envision a Fed with significantly less autonomy.

Be careful what you wish for. Given congress’s track record and an approval rating of just 18% the only thing worse than an independent Fed would be one run by congress.