While it may feel like the Trump Rally has exploded out of control we’re still at levels we’ve been flirting with since the dog days of summer. The S&P 500 (SPY) is up a little less than 2% from Election Day. The real story has been the rotation in and out of asset classes turning some strategies on their head as investors scramble to keep up. The rotation from growth to value can be seen in the iShares S&P 500 Value ETF (IVE) vs iShares S&P 500 Growth ETF (IVW). The truth is this has been building all year but the chart shows just how explosive the move has been since Election Day.

In a recent article CNBC points out that global equity funds took in $27 billion in the week ended Nov. 16th while fixed income saw the removal of close to $18 billion. While we haven’t seen a rotation this large since the 2013 taper tantrum it’s important to remember there are still titanic forces in place to prevent a total collapse in the bond market. As a result it wouldn’t be surprising to see some type of snap back in the days and weeks ahead.

Two weeks ago the spread between U.S. and German 10 Year sovereign debt was 163 basis points or 1.63%. Today that spread has widened all the way to 2.08%. On a relative basis US debt looks pretty attractive. Currency moves and hedging certainly weigh into that dynamic but asset classes don’t move in a straight line up or down. In addition, until proven otherwise global inflation is still anemic especially with a continued glut of crude unlikely to dissipate anytime soon. I will add however, that institutional investors have finally stopped drinking the Kool Aid and are starting to turn their backs on negative rates. Both Japanese and German 10 year rates are now in positive territory. 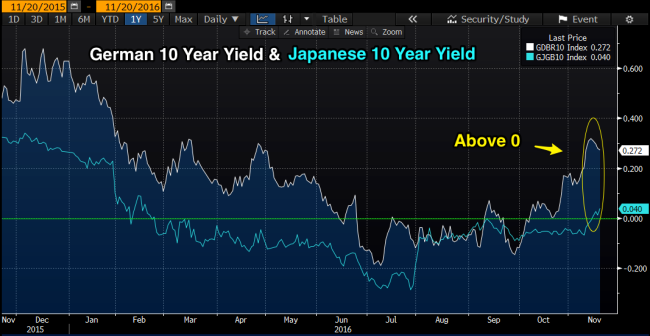 The rush into equities post the election is in part fueled by the prospects of a repatriation of corporate cash held abroad and tax reform. All of this is certainly good news for any plans to rebuild our failing infrastructure not to mention the jobs and GDP boost that comes along with it. However, David Kostin and his team at Goldman put out a note late last week that should give investors pause.

They point to a potential increase of capital usage by 12% to $2.6 trillion including capex, R&D and M&A. However, they also point to a likely 30% surge in S&P 500 buybacks. Are we doomed to repeat the same mistakes of the last 5 years? Once again management teams will pick the low hanging fruit to fuel earnings per share and in so doing meet executive pay compensation hurdles. 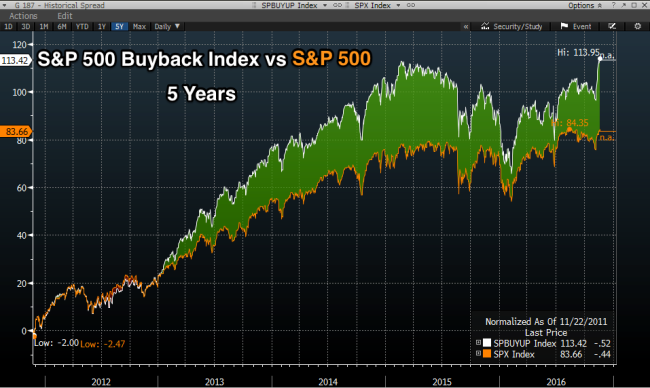 Why build a factory or invest in technology that can boost productivity if it’s only your successor that will reap the rewards? Once again, we will be hit with a wave of earnings beats and guides higher but with little increase if not outright declines in revenue. My best guess is that CEO’s use the bulk of funds for financial engineering.

It’s important to remember that buying back shares does nothing for revenue and net income. It simply boosts earnings per share because the share count is decreasing. In the short run it can boost stock prices but eventually you stagnate as a firm, much the same way IBM did after years of buying back stock at an annual clip of about $13 billion a year. To their credit, they seem to have slowed that process down. Whether it’s too late to turn this battleship back on course remains to be seen.

The spread charts tell a story. The five year chart comparing the S&P 500 Buyback index to the SPX (SPY) itself significantly outperformed but has relinquished its leadership over the last year. Not surprisingly, fundamentals have caught up with many as revenue growth has taken a back seat.

While I rarely find myself on the same page as legendary investor Bill Gross, I am in agreement with his recent comments regarding repatriation. He points out in a recent CNBC interview; “Prior holidays, tax holidays, as in 2004, during the Bush administration led to little investment in the real economy. Three hundred fifty billion dollars of repatriation [then, led to] share buybacks and CEO bonuses etc…

So what’s the answer? Common sense dictates we should do everything we can to bring home these idled funds and put it to work but history dictates the money won’t find its way to where it will do the most good.

Will congress along with President Trump be forced to play traffic cop directing funds that come back into the U.S. via a tax holiday. Given the congressional track record that’s unlikely to get the job done.

No, in the end it’s going to come from better corporate governance. If we are at the gateway of a new paradigm politically it’s time to let that carry over into the board room. In recent years, boards have failed in their mission to advance the needs of the company and in turn shareholders acting more as agents of the CEO.

Compensation and bonus benchmarks have to be revamped to focus more on the long term health of corporations rather than the current quarterly merry go round beating some short term hurdle that lines the pocket of management.

Solve this problem and you’ll not only fix what ails corporate America but in the words of Gordon Gekko; “that other malfunctioning corporation the U.S.A.”