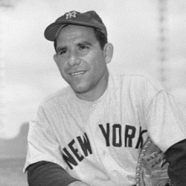 Recount – It ain’t over till it’s over 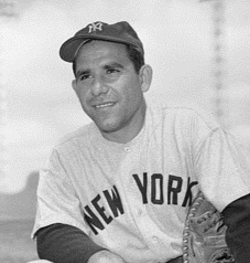 It’ ain’t over till it’s over – Yogi Berra

We ended the Holiday week pushing U.S. equity benchmarks to another round of record highs and maybe a bit too comfortable with the concept  that stocks are setting up for the next leg of the bull market.

Late Friday, Green Party candidate Jill Stein announced they had filed in Wisconsin demanding a recount and would follow with at least two other battleground states, Michigan and Pennsylvania. Given the margins, it seems unlikely these recounts will lead to anything and perhaps could do more harm than good. The Clinton campaign is joining the process and of course the President Elect will have to have their team in place. Accusations have been flying from all sides with some claiming we have to get to the heart of Russian hacking to accusations Jill Stein is using this as a means to raise funds. The only sure winner in this process are the lawyers.

Never the less, even with probabilities of a change in outcome low we have to at least explore what an unwind of the Trump Rally would look like. IMHO we would have gotten a relief rally regardless of the winner. Markets hate uncertainty and the results at least for the moment ended the debate. 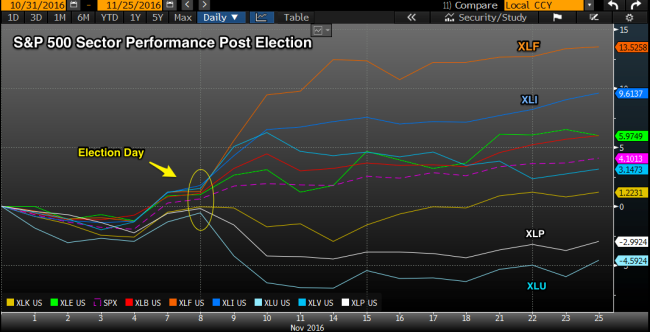 The Trump Effect in the near term drove markets much further as there was a more defined economic message focusing on growth, tonic to investors who had been forced to pile into a handful of names still showing signs of secular expansion. For the last couple of years, companies like Amazon (AMZN), Alphabet (GOOGL), Facebook (FB) and Netflix (NFLX) the FANG stocks, dominated investor interest as traders ignored entire sectors of our economy.

Hoping for a boost in GDP, investors piled into value stocks pushing some of them beyond current fundamentals. Financials still maintain their lead in the post-election race on the backs of a potential unwind of Dodd-Frank and rising interest rates. Industrials are #2 with a bullet as promised infrastructure spending and a focus on defense drove the sector up close to 10% since Election Day. As you might expect, defensive stocks like Utilities (IDU) and Consumer Staples (XLP) have lagged as the rotation hit investors hiding in the bunkers hardest.

Investors tend to push the envelope too fast so some sort of reversion to the mean in the days and weeks ahead is likely. If the recount changes the outcome in even one state, then any mean reversion trade will pick up steam very quickly. We’re coming up on 3 weeks since the election, a lot of time for investors to change their portfolios buying into the new paradigm. Even the perception of a change in that dynamic could hurt new believers forcing them to dump recent purchases. A 50%% retracement could put new buyers of Financials (XLF) and Industrials (XLI) down over -6% and -5% respectively. 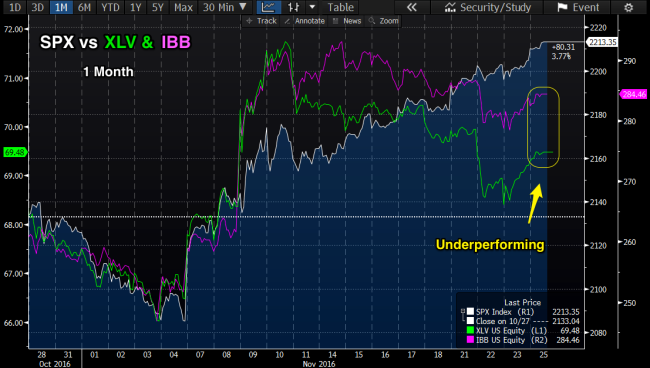 Interestingly one of the early Beneficiaries of a Trump victory, Healthcare (XLF) and in particular Biotech (IBB) has started to underperform the market even before news of a recount. There’s something else going on here beyond the rhetoric of Secretary Clinton and Senator Sanders.

Drug pricing is going to be a focus of any administration. One thing was clear in the recent round of earnings conference calls. The ability of drug companies to raise prices on legacy blockbusters as volumes fall will be challenged. For decades, layers of middlemen between the manufacturer and consumer have added to the complexity of drug pricing. The lack of transparency has invited increased scrutiny which will shine a light on an otherwise opaque process. 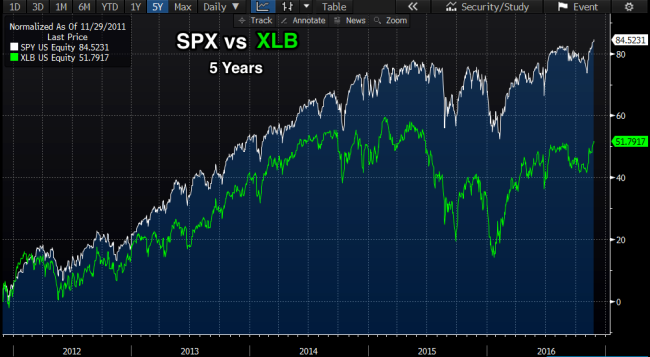 One other winner in recent trading has been the Basic Materials Sector (XLB). It’s only slightly outperforming since Election Day but notable as it has been a big laggard in the last 5 years. Copper and Steel prices have exploded higher recently as hope for the reflation trade builds. 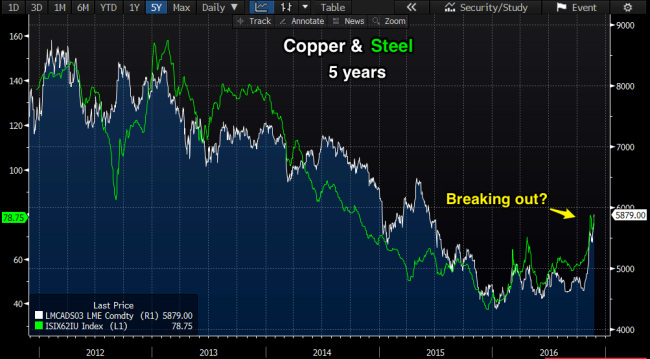 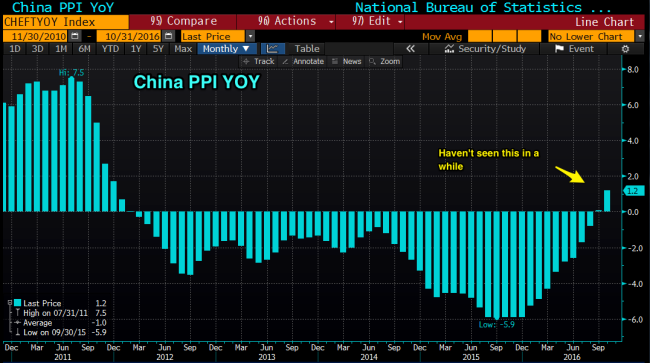 One of our international managers Philippe Comby pointed out this week other signs of economic activity that may be supporting this view. China’s PPI has gone positive for the first time in years. For the last decade we’ve been in a deflationary spiral. Maybe we’re closer to the end of this trend than most investors believe.