Home » Investment Management » Will the Fed end the Trump Rally? 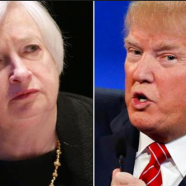 Will the Fed end the Trump Rally?

After a 4 week post-election rally pushing the Dow up close to 20K, focus shifts to the Fed and an expected rate hike, the first since last year. There’s little debate on the street as to the announcement this week but the commentary that follows has investors wondering just how much we’ll learn about the policy path as we head into the New Year. I believe Chair Yellen understands the importance of the Federal Reserve passing the baton to fiscal policy. The Fed missed their window as far back as 2013 but recent data points to an economy primed to climb out of its 2 yearlong malaise.

The only real surprise would be if the Fed held their ground and didn’t pull the trigger. If that happened the Trump Rally would end in a heartbeat with banks leading the way south. Given the rhetoric, there’s likely no love lost between Yellen & Trump and many believe the President Elect will replace her at the first opportunity.

I think most professionals including yours truly put the odds of no hike at close to zero. “It ain’t what you don’t know that gets you into trouble. It’s what you know for sure that just ain’t so.” The make believe Mark Twain vote from the popular movie The Big Short says it all. I see little chance of the Fed taking a pass but given what we’ve seen over the last several months nothing would surprise me.

While stocks have soared since Election Day, the make-up of the rally points to a strong cyclical recovery not unlike what we see coming out of a recession. The rotation from slow even no growth stocks supported by only the dividend to deep cyclicals like banks, industrials, and consumer discretionary was driven by the realization that a rollback of regulatory overreach, tax reform and a pro-growth agenda could be the foundation of the next leg of the Bull Market. Why pay well above market multiples when there are cheaper stocks ready to explode higher on the back of a stronger economy.

To be fair, what we are seeing is not all about the Trump effect. On Friday, I told Fox Business anchor Charles Payne the economy wasn’t as bad as we thought. The 2nd revision of Third Quarter GDP came in at 3.2% well above expectations.

I went on to say; “Growth solves a lot of problems, politically and economically.” The prospect of higher growth under the incoming President has driven animal spirits forcing investors out of safe haven trades into stocks. In addition, Consumer Sentiment and Confidence surveys have exploded higher since the election challenging levels not seen since before the financial crisis.

It’s pretty clear that Fear has taken a back seat to Greed. In the space of 24 hours perceptions shifted from the glass is empty to the glass is half full.

Before we let our emotions run out of control it’s important to remember that much of the market’s push higher is on the come.

While I’m excited real fiscal reforms are just around the corner, markets don’t move in a straight line. Some proposals will be watered down by partisan politics diluting some and in turn their economic benefits.

As I pointed out in a recent post, the repatriation of corporate cash held offshore following a tax holiday may not add as much to the economy as thought. While even the lower taxes paid will go a long way to support proposed infrastructure spending which in turn adds jobs just how much cash CEOs will plow into CAPEX and R&D remains to be seen. We had a similar repatriation in 2004 and much of those funds went into stock buybacks.

The truth is, that unless corporate boards establish new metrics to gauge executive performance it’s in the CEO’s best interest to focus first on the short term. Why invest in a factory or increased R&D when a buyback does more for earnings per share today? The focus on EPS is unfortunate because buybacks do nothing for revenue or real earnings only earnings per share due to a smaller share count. Until boards restructure compensation packages that balance the future with the needs of today, I’m skeptical just how much benefit the economy will receive from repatriation.

The media’s obsession with Dow 20K means next to nothing other than it’s a nice round number and we can all put on our party hats. The price weighted index relies almost exclusively on the highest priced stocks in the index to drive returns.

At $241 and its nearly 34% return since Election Day Goldman (GS) is responsible for the lion’s share of the DOW’s return. Cisco (CSCO), General Electric (GE) & Coca Cola (KO) hardly matter. If Goldman split their stock today 5:1, it would head to the back of the bus in importance. The more important indices are the S&P 500 both market cap and equal weight as well as the Russell 2000 for small caps where the real gauge of the economy may reside.