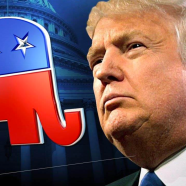 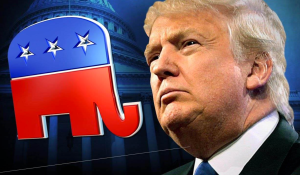 Equity markets are in the short run a barometer of investor perception and emotion. Over the long term they are a discounting mechanism for growth and future earnings.

There’s an old saying that markets hate uncertainty. The reality, is that it’s investors that hate it and often react emotionally to every hiccup in the data and unfortunately every media soundbite.

The new dynamic for investors is of course Donald Trump. I don’t want to litigate the election or add to the rhetoric from the print, broadcast and social media. For this forum, I will discuss the company specific and economic fallout from executive action or geo-political push back to the President’s agenda.

None of the potential policy shifts that helped drive the outsized returns post the election have materialized as of yet. It’s only been a week but despite a dizzying start there was little focus on the key points investors care about. Obviously, Wall Street is not the President’s only concern but tax reform, a rollback of the regulatory overreach and infrastructure spend are at the top of any portfolio manager’s list of issues we’d like to see addressed in the coming year.

Tax reform is key to any bull case. It must go well beyond a tax holiday to repatriate funds held offshore. With a tax code over 77,000 pages I suspect there are a few things we can do to streamline the system. Number 2 with a bullet is regulatory reform. The obvious beneficiary is of course financials which have had a monster run post the election and that’s without the first regulation being given the deep six.

So far, most bank earnings have met the mark indicating the environment was improving even pre the election. JPMorgan (JPM), Bank of America (BAC) and Wells Fargo (WFC) all delivered a strong print pointing to improved net interest margins and a pick-up in loans. 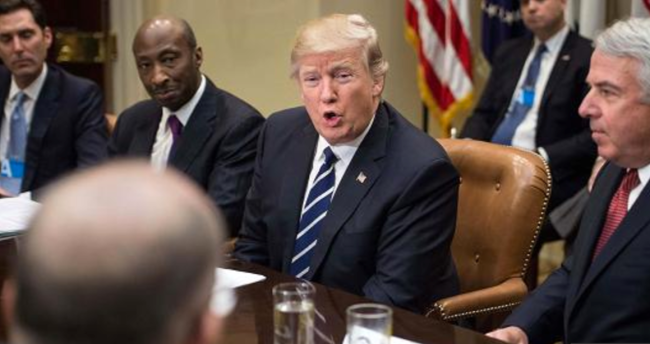 It’s early, but I’m encouraged by what I heard coming out of the President’s Tuesday meeting with CEO’s from some of the largest players in Pharma and Biotech. For now, it seems the tradeoff for investors would be a rollback of some regulations and a quicker path to market for new discovery. Payback would of course be lower pricing for Medicaid and Medicare.

The kicker would be an end to the global free ride much of the world gets from our Research & Development. Put yourself in the shoes of a Pharma CEO. It might cost several hundred $Million to develop a drug that finally gets through Phase III and eventually to market. They price the drug in the U.S. to make a profit and recoup development costs over time. The manufacturing costs are often minimal. Some countries directly or indirectly control medicine costs. As a result, Pharma and Biotech companies sell drugs in Europe and other countries at a reduced price willing to take in the additional revenue.

Expect legislation that will require U.S. Drug companies to keep global pricing closer to the U.S. That would be great news for the American consumer. 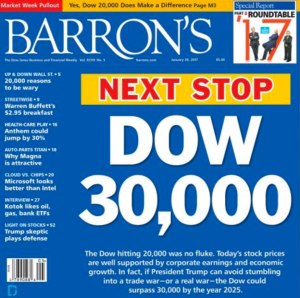 The picture goes to the heart of what I’m talking about. Last week after several failed attempts the DOW finally crossed the 20K barrier. In less than a week we’ve had magazine covers depicting DOW 30K and media interviews talking about falling into the Abyss.

While it makes good theater, it does nothing to help you or your family achieve investment goals.

Despite Monday’s spike in the VIX, higher volatility has been extraordinarily low. As I’ve stated in previous posts the VIX can be useful in identifying entry points from extreme oversold conditions but is less helpful in the throes of a Bull Market. It can stay stubbornly low for long periods of time and as I pointed out to CNBC anchor Melissa Lee in a recent interview, a lot of hedge funds have gone broke shorting the market using the VIX as a guide. 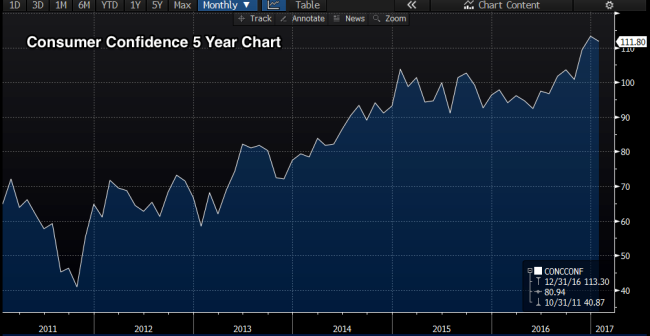 As we close out the month Tuesday’s data was a bit soft. PMI came in at just 50.3 missing expectations at 55.5 and Consumer Confidence falling short at 111.8 with 114 the expectation. As you can see in the 5 year chart above this is still a very good number that has been climbing since the end of the Financial Crisis and accelerated post the Election.

That’s it for this month. A positive start to the year but as always we take it one day at a time.

*At the time of this article funds managed by David Nelson were long JPM, BAC, WFC, MRK & AMGN