Posted by David Nelson, CFA on February 19, 2017 in Investment Management | Leave a comment

“Markets climb a wall of worry.” It’s a phrase used to describe market rallies in the face of rising investor concern.

Wall Street and the media have hundreds of these phrases to put into a few words complex interrelationships that ask the near impossible of investors. Make a binary decision based on imperfect information. But that is in fact what we do. We gather and process as much information as we can but in the end, risk can only be reduced, not eliminated.

The market rally post the election caught many off guard forcing investors to chase a train that may have already left the station. To be fair, even pre the election some sectors like Financials (XLF) now up 22% post-Election Day, we’re improving since Jamie Dimon put in the bottom not just for JP Morgan (JPM) but the market (SPY) as well. On the day in question February 11th, 2016 Mr. Dimon CEO of (JPM) went into the open market buying 500,000 shares of his company stock giving investors’ confidence to do the same. 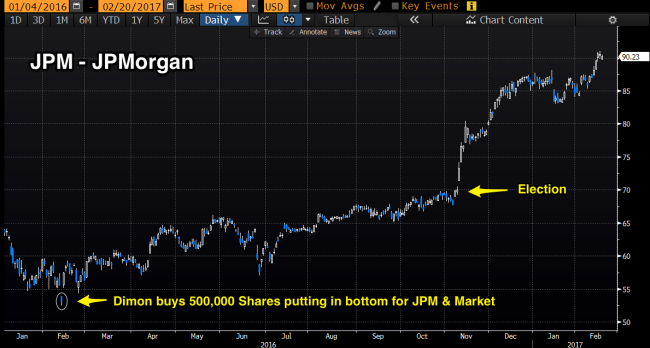 After the election the potential for an infrastructure spend, tax reform, repatriation and of course a rollback of regulatory overreach drove markets maybe beyond what current multiples support. However, markets are a discounting mechanism with the look forward a lot more important than what’s seen in the rear view mirror.

I was getting worried…

You can imagine my concern watching my wall of worry collapse as earnings come in higher than expected and indicators like the NFIB Small Business Optimism Index hit the highest levels in years.

However, just seven weeks into the New Year it’s become clear the wall isn’t coming down anytime soon. The political drama in Washington could delay or even eliminate announced policy initiatives pushing investors into a wait and see mindset. That in turn could create an air of uncertainty for markets. No, I’m not going to say it. That’s too easy.

Goldman’s David Kostin goes right to the heart of it in last week’s research piece pointing out that analysts, given the rising uncertainty have been reluctant to include in estimates the potential earnings boost we get from administration proposals.

Wall Street reaction will likely include non-committal phrases like “we expect market volatility to rise.” To the uninitiated, that’s code for; “we have no idea what’s going to happen next.”

How the Fed reacts to events unfolding in Washington will take center stage as we approach the next meeting. On Wednesday’s i24 News show Clear Cut, I told anchor Michelle Makori I thought the recent data supported another Fed move in March.

I’m now convinced they’ll wait until they see the whites of the eyes of inflation or the market forces them to make a move. Like yours truly, they have their wall of worry as well.

← The Market Rally – Up Close & Personal Olive oil & the economy →