Home » Investment Management » Can The Hammer Save Oil Bulls?

Can The Hammer Save Oil Bulls?

Posted by David Nelson, CFA on May 8, 2017 in Investment Management | Leave a comment

Healthcare and the French Elections topped the Wall of Worry list for the last several weeks. As of this writing a Macron win seems all but certain with early exit polls giving him 65% of the vote. Here in the states Healthcare is once again center stage as a partisan Congress deals with the AHCA as it moves from the House to the Senate.

Politics aside, the bigger concern for investors is Tax Reform slipping to 2018 as the healthcare debate sucks up all the oxygen in the room.

Can the Hammer Save Oil Bulls? 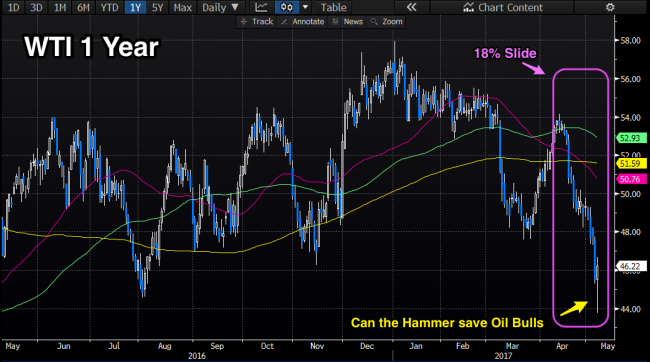 Lost in the noise and near hysteria in the press, investors once again come face to face with a familiar nemesis. Plummeting oil and the baggage that comes along with it is back once again. Some of the biggest throw backs in the market have come on the heels of falling oil as investors start to question economic growth. As the decline accelerates the focus switches to the financial sector as concerns mount on just how much energy exposure banks have on their loan books.

Investor’s know all too well the damage the falling commodity can have on investor returns as some of the issues mentioned above play out. However, for the last few weeks stocks and oil have been heading in opposite directions as the high correlation morphed into an inverse correlation.

The most recent slide in crude started on April 12th. On an intraday basis during Friday’s session the commodity was down over 18% in just a few short weeks. Oblivious to the slide or looking at the bright side of reduced energy prices, stocks started a slow climb North up well over 2% during that time frame.

Given the world is currently flooded with oil and production here in the states continues to ramp up, it remains to be seen if it can hold these levels much less climb from here.

At least for now, investors are focused on the 13% earning’s growth in the first quarter while ignoring weak crude and some of the soft macro data. In addition, a major bright spot this quarter was signs of real revenue growth something absent in the last few years as CEOs focused on boosting earnings per share through financial engineering.

Let’s hope last week’s modest push to a closing all-time high in the S&P 500 (SPY) is the beginning of a new trend and not the end of one.