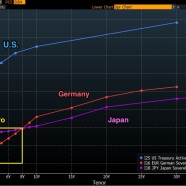 Posted by David Nelson, CFA on May 30, 2017 in Investment Management | Leave a comment

With equity markets (SPY) at all-time highs investors are searching for any signal that could give them an advance warning to pull the rip cord. Even in the face of a paralyzed Washington traders have stepped in to buy each and every dip.

Tax reform and other market friendly initiatives have largely fallen off the radar for 2017. Perhaps a corporate tax rate cut could make its way to the floor but I see little consensus on either side of the aisle. 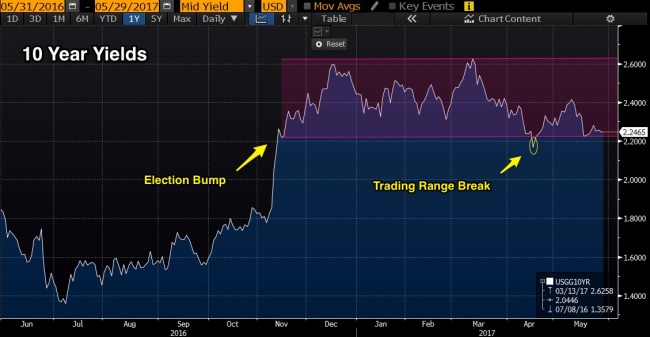 With a strong earnings season in the rear view and most economic indicators in the green, bonds are clearly not following the Bull Market script.

Even after strong signals from the FOMC minutes that a June hike was on the table and the unwind of a $4.5 Trillion balance sheet would start by year’s end, 10 year yields drifted lower indicating strong demand.

With little confirmation to the above, I believe the explanation lies elsewhere. For fixed income players in sovereign markets the United States is still a destination of choice. Strong demand for U.S. treasuries is nothing new when faced with some of the alternatives. 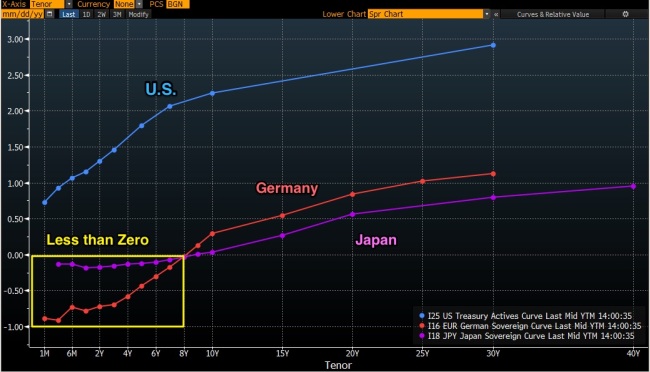 Today a substantial portion of the European and Japanese interest rate curve are still less than zero with all maturities well below what’s available here.

In the face of this dynamic the U.S. dollar remains weak, well off highs post the Election bump. This becomes an added cost as many off-shore investors are forced to hedge their currency risk. To date, there seems to be few alternatives unless you enjoy paying to have your funds held in a less than zero world.

History will be the judge of those willing to park funds in debt offering negative yields. The conventional wisdom that bond investors are smarter than stock investors is truly being put to the test.

← The Greatest Show on Earth The Glass is Half Empty – 2 Charts That Prove It! →