Posted by David Nelson, CFA on June 26, 2017 in Investment Management | Leave a comment

I look at my watch, it’s already noon as I go through my Sunday reads getting ready for the start of trading Monday. Every week seems to have a theme and it looks like the obsession this week, is what the next recession will look like. On Friday, the Bank of International Settlements released their annual report focused on a range of issues including recessions, inflation, boom bust cycles and the role of central banks. Goldman’s Jan Hatzius also put out a piece late Friday The Next Recession; discussing the downturns post World War II. Here we are 48 hours later and we get a Business Insider article on the next recession breaking down the BIS report.

Reading economic reports on a beautiful Sunday afternoon often makes me question my career choice. Given of the financial community’s ability to predict the very recessions we’re concerned about begs the question; why bother? Currently I’d have to rank the industry’s track record somewhere between the Philadelphia Phillies and the New York Jets.

Never the less sometimes something pops out taking the drudgery out of the exercise. The Goldman report points out the two most common causes of recessions in the modern post war era. A policy mistake from the Federal Reserve and or an oil shock rank at the very top of the list. 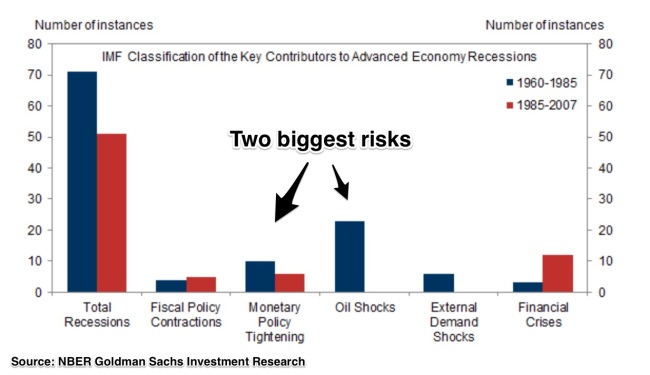 Make no mistake, the potential of a policy mistake is a very real concern especially given the delayed reaction to any Fed initiative. Trying to steer the U.S. economy has some of the same challenges faced by a cruise ship captain. By the time you see the iceberg, it’s way too late to adjust course so you have to make your decisions well in advance second guessed by any number of Monday morning quarterbacks like yours truly.

Add the fact that our central bank is running low on ammunition highlights the need to move forward with normalization and a reduction in the massive $4.5 Trillion balance sheet.

Number 2 on the list of recession triggers over the last half century are oil shocks. Unless you’ve been hiding in a cave it’s pretty easy to see that the supply/demand dynamic that dictates energy prices is vastly different than it was just 10 years earlier.

OPEC effectively signed its own death warrant on Thanksgiving, 2014 when the Saudi’s refused to cut production in the face of plummeting prices. My piece for Yahoo that December, Oil & the Black Swan spoke to some of the concerns and potential fallout as we moved into the post OPEC era.

Technology, as it’s often been throughout history was the big disruptor. The ability to extract shale oil and gas at competitive costs has changed the world’s reserve structure potentially letting the U.S. morph from energy importer to exporter. Increased supply acts like an anchor for prices making it difficult for other dynamics to meaningfully push prices higher.

To be sure, Saudi Arabia could reverse course forcing a cut in supply to re-establish its leadership looking for other OPEC members to follow. Given the track record of cheating, the phrase often attributed to life Coach John Maxwell comes to mind. “A leader without followers is just someone taking a walk”

On Maria Bartiromo’s show Thursday last the subject of demand came up. The best thing that could happen for oil price bulls would be increased economic output worldwide. While it’s true that improving economies will help support prices, potential peak oil demand is very real especially in the face of improved efficiency and the steady march of alternative energy.

Alternative energy is clearly the future but the U.S. isn’t about to let go of fossil fuels just as technology gives the sector a new lease on life. The biggest difference between the political left and right isn’t the inevitable success of alternatives but the pace and whether or not it should be subsidized.

Putting this all in perspective it’s suddenly clear that one half of the two biggest causes of recessions is taking on all the characteristics of the Dodo Bird. Any number of geo-political events i.e. famine, natural disasters and of course war could change any of the above. However, the potential of an oil shock to disrupt the economy at least here in the U.S. has been vastly reduced and should be celebrated as a positive.

One of the bigger concerns during the last cycle was the eventual write off of bank loans to the energy complex as nearly 270 oil & gas companies filed for bankruptcy. As pointed out in a recent Houston Chronicle article JP Morgan (JPM) and other banks are again lending to the industry but are doing so cautiously with new guidelines from the Office of the Comptroller of the Currency.

I’m sure the economic cycle is intact and at some point the inevitable downturn will be at our door. However, given the track record of some of the brightest financial minds on the planet, I suspect the next recession won’t show itself until we see it in the rear view mirror.

← Washington is Toxic – My morning with Maria Healthcare – “Life is hard, but it’s even harder when you’re stupid” →