Posted by David Nelson, CFA on August 28, 2017 in Uncategorized | Leave a comment

Before weighing in on the economy and Washington I’d like to take a moment to comment on the devastating storm that hit Texas.

Storms like Harvey are particularly dangerous especially considering the fact that nearly 1/3 of U.S. refining capacity sits in its path. As of Sunday, reports suggest that 12% of our fuel making capacity has been shut down. Commodity prices in the wake of storms like Harvey can react violently in the short run but often revert to the mean once the threat has passed. Along with widespread flooding there have been several reported deaths, a number that is likely to rise.

Once again Americans witnessed neighbors helping neighbors in the wake of a storm that dumped nearly 50 inches of rain. The political divide doesn’t seem so wide when lives are on the line. You drop everything and jump in to help.

We’ll of course be monitoring the financial effects including disruptions in the insurance and energy industries but clearly the biggest cost will be the human tragedy that always accompanies a natural disaster.

Like clockwork the S&P 500 as well as the tech heavy NASDAQ found support at the 100 day moving average. Perhaps the biggest concern for bulls is the miserable underperformance of small caps as can be seen in the Russell 2000 ETF struggling to hold the 200 day. Along with Banks small caps were a big part of the Trump trade so it’s not too surprising that these names have struggled in the face of several miss steps by the President and a legislative goose egg for the GOP.

Large caps held up best during the pull back as last week’s article from the Wall Street Journal discussing geosynchronous growth around the world touches on some of the reasons why. When was the last time you could say something good about Greece. Well Greece this year is actually going to come in with a positive +1% GDP. 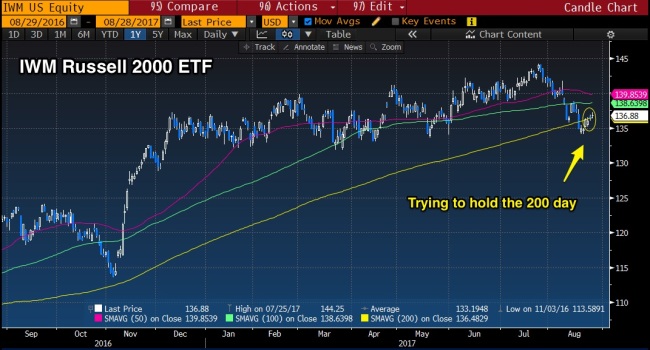 With growth around the world stronger than it’s been in some time it helps explain why our markets led by large cap multinationals have held up better than their small cap siblings. Today, over 40% of S&P 500 (SPY) revenue comes from overseas. If markets there are doing well you can be sure our customers abroad are doing better pointing to top and bottom line growth. Add a little help from a weak dollar (DXY) sitting at 52 week lows and the picture gets a little clearer. 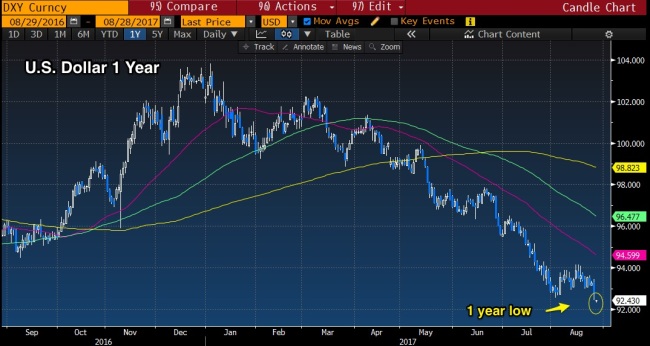 Unfortunately, most of the above looks backward with investors hoping past is prologue. The good news is we’ve just come through an outstanding earnings season but with a near dysfunctional Washington, any help from fiscal policy seems unlikely.

As I pointed out on several talk shows the window is tight for the administration regarding tax reform. Following the break, Congress has to jump right in on the budget and of course the debt ceiling leaving little time before year’s end and the unofficial launch of the 2018 election cycle.