Home » Investment Management » Purge at House of Saud – What does it mean for oil?

Purge at House of Saud – What does it mean for oil? 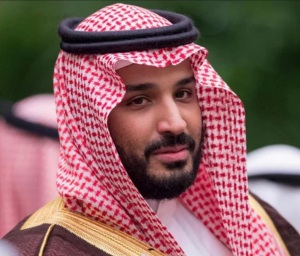 In a stunning sequence of events heir apparent to the Saudi throne, Prince Mohammed bin Salman seems to have consolidated power as authorities detained dozens including Prince A-Waleed bin Talal one of the richest men in the world. Along with Al-Waleed were 16 other princes as well as former ministers in an apparent purge to remove any opposition to the sweeping changes the young prince and son to King Salman envisions for the oil rich nation.

World markets haven’t had a chance to react but investors will be watching closely for any signs of disruption or concern by energy traders. Despite the U.S. push to be one of the leading energy producers in the world, Saudi Arabia is still in control of a vast amount of the world’s proven oil reserves. While alternative energy is certainly the future, disruption of any fossil fuel production can have an enormous near term impact on the supply demand dynamic as well as the world economy. 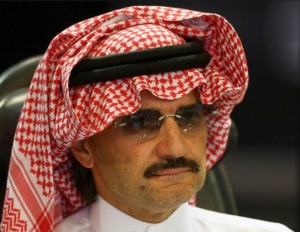 The timing of the purge is curious especially given news reports of a missile intercept over the capital believed launched from Yemen. Speculation is rampant but the events beg the question; was there evidence of a coup and did the current regime believe there was a credible threat to the crown?

Even as the broadcast and print media were attempting to digest the latest chain of events, more news rocked social media pages. Reports suggest that a Saudi helicopter carrying 8 high ranking officials including Prince Bin Muqrin deputy governor of Saudi Arabia’s Asir province crashed and are all feared dead.

Clearly, there is more going on than meets the eye. For now, we are being told that King Salman ordered the arrests as part of an anti-corruption campaign. The purge seems to have also reached into the board of Saudi Armco which hopes to take shares public as board member Ibrahim Al-Assaf was also taken into custody. 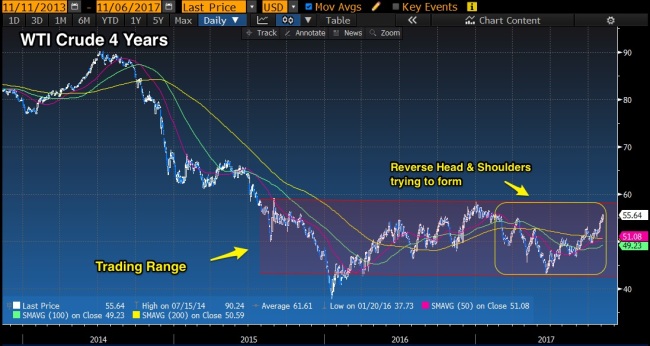 The first place investors are going to look for reaction is oil which despite its recent rise has been stuck in a trading range for the last couple of years. When I wrote Oil & the Black Swan in 2014, Saudi Arabia was coming to grips with the realization that new technology in the United States had changed their ability to control supply and in the end price.

WTI Crude has been stuck in range for more than 2 years. The bullish reverse head and shoulders pattern forming over the last several months could prove out if confirmed with a breakout near 60. Despite my belief that the long term prospects for fossil fuels and oil stocks is grim, the end game is a long way off and short term geopolitical turmoil and or supply disruption can change the dynamic quickly.

The young future king Mohamed bin Salman is looking to change the country’s focus making it less dependent on its energy reserves. MBS as he is often referred to looks at a country whose youth dominates the demographic. His efforts toward liberalization may have met resistance from those who have lost the most power and the purge could be an attempt to shut down an attempted coup before it even gets started.

In any event, the days and weeks ahead will prove interesting for the Arabian Peninsula. Markets will likely provide a lot more insight and direction than any press release from the House of Saud.