Risk assets put in a strong showing last week despite rising concerns over trade. Going into the G7 Summit, tensions were high and with the President rejecting a joint communique on the heels of a harshly worded statement from Trudeau, it’s a dynamic that isn’t likely to end soon. They only thing that can shift the focus away from current trade disputes is the historic summit in Singapore where a sitting U.S. President will meet with North Korea’s Kim Jong Un.

From a market perspective, I don’t think expectations are elevated nor should they be. At best this is a process and will take time to get a verifiable commitment. If it doesn’t happen we’ll be right where we were a year ago. Despite the uncomfortable backdrop of missile and nuke tests, 2017 wasn’t a bad year for stocks.

While the summit in Singapore is important for the U.S. and the world, investors would be wise to focus on other parts of the planet that may have more of an immediate impact on U.S. share prices.

Any investor that’s been in this game since the late 90’s will remember how a seemingly insignificant currency like the Thai Baht could cause an Asian contagion and a quick 11% correction in U.S. stocks. It’s important to remember that central banks around the world kept rates close to zero for much of the last decade. With the U.S. walking down a path to normalization unintended consequences are a distinct possibility. This is the end of the experiment and uncharted territory. Eventually, other central banks will have to follow.

From Brazil to Turkey and even Italy, warning signs are mounting that all is not right in the world. The siren call of emerging markets has lured investors with above trend growth and at times soaring returns. However, make no mistake these markets are not as robust as the United States and often don’t have the protection of law or free market principals to sustain them. Yes, I know Italy isn’t an emerging market but if the World Trade Organization can refer to the world’s second largest economy China as an emerging market, then I can take the liberty.

In less than a month, Brazil’s Bovespa fell nearly 18% in US Dollars on the heels of a falling real, an introduction of price controls and as the Financial times puts it ”a throwback to previous left-wing policies.” Meanwhile across the pond, Italy’s new populist anti-establishment government has sent their sovereign yields soaring and the cost of protection in credit default swaps alarmingly higher. While for the moment none of this necessarily affects the business at your local Walmart (WMT) or Home Depot (HD), even small ripples in debt markets outside the United States can rattle U.S. shares.

Year to date, the largely domestic Russell 2000 (IWM) is outperforming the S&P 500 (SPY) and may be signaling a breakdown in the world-wide geosynchronous growth we were so excited about earlier in the year. Add rising tensions with the G7 and an administration that isn’t willing to back down to the demands of world leaders, the shift in leadership takes on some significance. 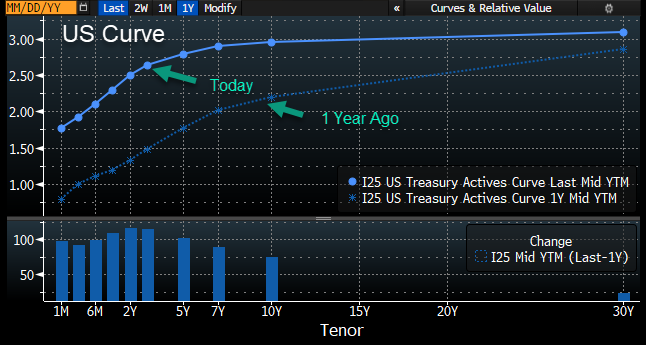 On Wednesday, we get the Fed’s June rate decision which is all but a lock for another 25-basis point hike. At present current expectations for the August meeting imply another raise ignoring my call for the Fed to pause. With the yield curve getting flatter every day, an inversion is certainly possible. Look, an inverted or flat curve doesn’t guarantee a recession, but you can bet if or when we get there, every economist from Goldman to Merrill Lynch will be talking about it.

A falling dollar helped emerging markets throughout 2017 but it’s rise off the 2018 lows has weighed on both emerging market debt and equity. In addition, if our Fed keeps pushing higher with other central banks stuck at the starting line, we may see additional disruption across asset classes. Either confident or complacent investors have driven fear gauges like the VIX to the lower end of their trading range and even produced a small breakout above a downtrend line from the January highs.

Confidence demands hard data and research to support your view. Complacency only requires apathy. Do the research.

“Only when the tide goes out do you discover who’s been swimming naked.” – Warren Buffett