Home » Investment Management » What keeps me up at night 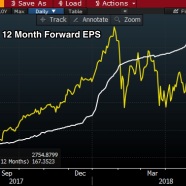 What keeps me up at night

Posted by David Nelson, CFA on June 25, 2018 in Investment Management | Leave a comment

Increased volatility and reversion to the mean have played a big role in 2018. Despite concerns surrounding trade and struggling international markets abroad, indices attached to U.S. equity have largely held up. Never the less, a number of red flags keep popping up forcing equity managers to at least ask the question; is there anything wrong with this picture?

The domestic focus is clearly visible looking at two of the top 3 sectors and asset classes. Consumer Discretionary along with small caps are highly dependent on domestic revenue and have led the charge year to date.

The secular growth that drives technology for the moment has overcome challenged international markets most of which are down year to date on the heels of an aggressive Fed and strong dollar.

What keeps me up at night?

Rising credit spreads and the occasional blow up in Credit Default Swaps like we saw in Italy a few weeks ago don’t happen unless something is structurally amiss.  Brazil, Turkey and a number of other countries paint a similar picture. 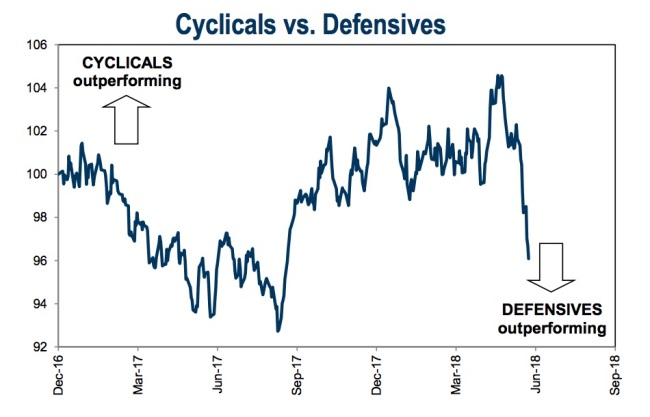 The chart above showing the relationship between cyclicals and defensive equities is concerning. If the numbers are as good as we think they are, than this picture is upside down.

Central banks are not an island unto themselves yet Chair Powell continues to push the envelope on normalization despite a world still stuck in a QE. The yield curve continues to flatten largely held back by other central banks not willing to follow the U.S. lead. Again, if or when the curve inverts every economist from Goldman Sachs to Merrill Lynch will be talking about it. 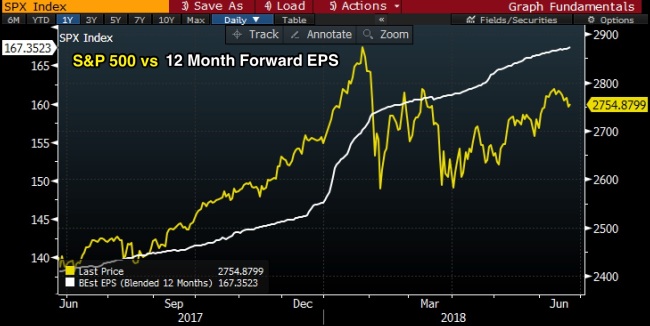 One look at SPX vs 12 month forward estimates shows analysts have largely taken a bullish view on the heels of a tax cut and improving economic data. One of the two charts above is wrong. If estimates are rising across the board why are cyclicals in retreat?

Earnings season is just around the corner and we’ll get our first look post the July 4th holiday break as the first pre-announcements come in.

Whether the divergence is driven by increased fear surrounding trade or a cyclical slowdown that just isn’t showing in the numbers it needs to be resolved. They say numbers don’t lie. With the Q2 earnings season just around the corner we’re about to find out.