Posted by David Nelson, CFA on July 9, 2018 in Investment Management | Leave a comment

In a shortened holiday week U.S. large caps managed to put in their first positive performance in the last four despite the Friday launch of $34 Billion in tariffs on China with a reciprocal move by Beijing. The strongest performance came on Friday just hours after both sides pulled the trigger on the heels an excellent jobs report showing a continued healthy economy across most of the country. Wage growth was just shy of expectations with whispers of “Goldilocks” making it’s way across many trading desks.

Earlier that day I joined CNBC host Brian Sullivan for the dawn patrol on World Wide Exchange. The conversation quickly turned to tariffs and trade. Even at that hour it was clear the market had already discounted the $34 Billion and now investors we’re looking to see if Trump would make good on his threat to launch tariffs on an additional $200 Billion.

Late last week some European manufacturers went to their political counterparts demanding they make a deal even if it meant no tariffs. What a concept and first teased by the President at the G7 meeting in Canada. I view as unlikely, but I would love to see the math on what a no tariff world would look like. If in fact Europe comes back with a significant reduction the administration would be wise to immediately rollback U.S. tariffs on light trucks as a sign of good faith.

Any fund that uses valuation as a component of its investment style has likely struggled year to date. Much of this becomes easier to identify when looking in the rear-view mirror. Some funds can adjust to the change while others by prospectus cannot. Many of the large cap value mutual funds are down year to date while their growth counter parts are enjoying a pretty good year.

When you dig down into the factor analysis the picture becomes a little clearer. The Chart showing a simple factor like sales growth compares the top 10% of the universe i.e. highest sales growth to the bottom 10%. The results are as you might expect with higher rankings being rewarded.

The picture in value has turned upside down when compared to history with a simple factor like earnings yield hurting performance. Companies showing good valuation metrics are being penalized in the market place. This negative trend became more pronounced after January 31st near the peak of the market. The earnings yield factor comparison is currently inverted. In the end, reasons why don’t matter but recognition and adjustment does. 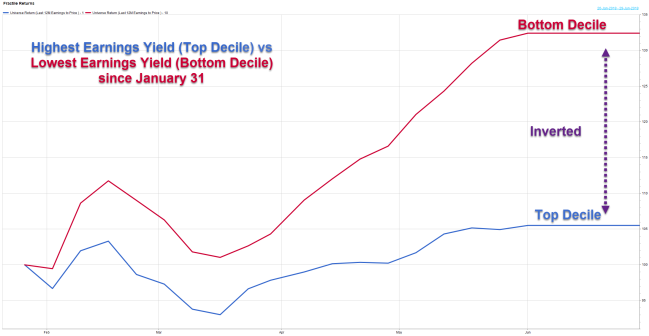 This dynamic is probably one of the factors that has weighed on Financials for the last several months. Financials are one of the few sectors falling into the value camp. This week we officially launch the Q2 earnings season with Bank of America (BAC) kicking off the show Monday morning. Most banks got a bump in estimates in late December anticipating the tax cuts making its way through the House and Senate. Since then estimates have drifted lower with analysts less confident in their projections and a yield curve that continues to be less favorable. We’re not involved in BAC but will be on the conference call listening to the Q&A.

I’m in for most of the week so please feel free to reach out with any questions.