Posted by David Nelson, CFA on September 10, 2018 in Investment Management | Leave a comment

Assets vs Liabilities – On one side of the market balance sheet we have a wave of strong economic data confirming earnings year to date. It’s not only the bottom line showing strength but top line performance is robust, a dynamic we haven’t seen for some time. Remember, there’s a lot you can do to hit earnings projections. Share buybacks, expense cuts and of course the help from tax reform but sales is perhaps the best metric to measure organic growth. Either you have it or you don’t and for the first time in a decade it isn’t just the secular growth companies like Amazon (AMZN), Alphabet (GOOGL) and other tech stars but industrial America is growing the top line as well.

Add the fact that you just had the best consumer confidence number in 18 years and it’s not surprising that August was as strong as it was with U.S. markets hitting another in a series of all-time highs. Never the less, a balance sheet has two sides and a review of the assets needs to be offset by liabilities which are unfortunately all too easy to identify.

Concerns surrounding trade rank high for the bears despite the fact to date there’s little evidence of a slow down here in the U.S. If anything the slowdown is taking root overseas, in particular some of our trade partners and adversaries. China has slowed enough that banking institutions are being encouraged to loosen standards to spur credit growth. With China such a big part of any emerging markets index it’s no wonder the iShares Emerging Markets ETF (EEM) slipped into bear market territory. As I pointed out in last week’s article Emerging Markets & the Black Swan; if there’s a Black Swan lurking, EM is where it lives. Emerging market currencies like the Argentine Peso and the Turkish Lira don’t collapse in a vacuum. 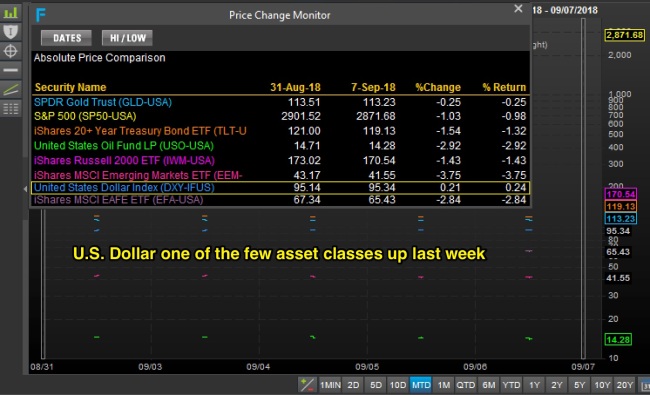 With many of the heavy players returning from their summer hideaways, September started off in the tank with almost every major asset class giving up ground. One of the few bright spots was the U.S. dollar which edged higher on the week. Of course, a strong dollar continues to weigh on dollar denominated debt and in turn emerging markets. With the Fed all but locked and loaded for another hike this month with another expected before year’s end, pressure is likely to weigh on these markets at least until January.

Is it time to turn off the cameras at Congressional Hearings? (Kavanaugh Hearing) 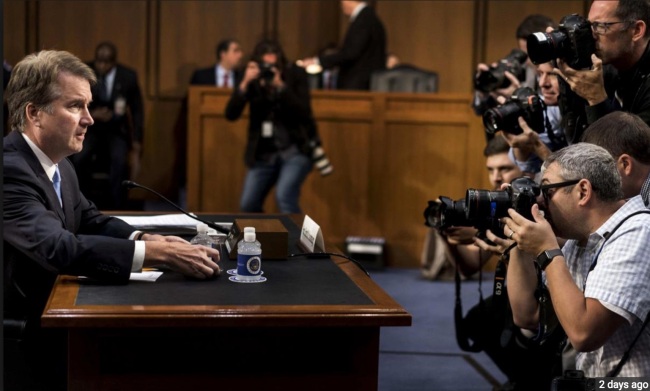 The Elephant in the room is of course Washington. Whether its palace intrigue at the White House or Congressional hearings that look more like a show put on by Ringling Brothers, investors have to wade through the headlines. Is it finally time to turn off the cameras at Congressional Hearings? The minute the broadcast media heavyweights make their way into the building with cameras, reporters and line crews in tow, Americans can count on almost nothing getting accomplished other than commercials for those running in the next election.

In the end the economy, earnings and organic growth will drive market returns. Despite most of the data last week in the plus column, traders chose to fade the news sending shares lower.

Friday’s employment report was close to an in line number and for the most part confirms the economic data we’ve been seeing all year. Some of the pieces of the puzzle moved around with construction, transportation and healthcare doing much of the heavy lifting. Manufacturing dipped 3000 but keep in mind we’re talking about an employment force of about 140 million so the margin of error is pretty large.

Could the 3k dip be an early warning sign on trade, maybe? Not a prediction but an observation.

Key in this report was average hourly wages. Year on year we’re at 2.9% and I could make the case it’s higher because of all the young people coming into the work force. They come in at entry level wages which could be skewing the numbers lower.

With earnings over and pre-announcement season a few weeks away traders have little more than headlines to drive sentiment. If the press lives up to its reputation every event will be painted in its harshest light. Remember, you don’t see BREAKING NEWS banners to broadcast good weather. However, a good HURRICANE will get coverage 24/7.