Home » Uncategorized » The Elephant in the Room – Part II

The Elephant in the Room – Part II

Posted by David Nelson, CFA on October 29, 2018 in Uncategorized | Leave a comment

The analysis, is always easier when you’re looking in the rear view mirror. There’s no shortage of data to help explain the free fall. Inventory overhang in tech, trade, tariffs not to mention the world’s second largest economy China is rolling over but the Elephant in the Room, is still the Fed.

Even within the ranks of the Federal Reserve some like Neel Kashkari believe the Fed needs to pause.
Look, we understand full well the Fed needs to move down a path toward normalization but it isn’t a race. Take a breath.

Earlier in the year I believed that 10 year rates just above 3% historically at the low end, wouldn’t be enough to cause a massive allocation shift. That was wrong!

I’ve talked to large insurance and pension plan operatives over the last couple of weeks. At the end of September they saw an opportunity to de-risk. The move higher in rates gives them the ability to match future liabilities with corporate bonds. Remember these institutions were forced to push further into stocks as artificially low rates left them few alternatives. I believe that shift was a big part of the systematic selling we saw earlier in the month.

Credit Spreads are Starting to Widen

Emerging markets were first to feel the pain as rates rose and dollar denominated debt was at risk.  My fear is the Fed will wait until they see credit spreads blow out before pausing. We’re already seeing credit spreads start to widen in both investment grade and junk.

Backing Powell into a Corner

Our economy is still very strong and to a large degree the reason Powell has been as hawkish as he is. Adding to the problem is the President who has repeatedly said the biggest risk is “the Fed.” He’s right of course and history is on his side. Never the less the only thing worse than an independent Fed is one that is politicized.

He’s backing Powell into a corner and given the recent jabs, December remains a lock.

Despite Big Cap Tech completely falling out of bed and revenue misses from growth superstars like Amazon (AMZN) and Google (GOOGL) Large Cap Growth still leads for the year. However, at least so far this quarter that dynamic has reversed. The one thing a high multiple growth company can’t do is miss on the top line or in the case of Amazon guide to slower growth in the all-important holiday quarter.

FANG and other growth stars has outperformed its value brothers and sisters by close to 100% over the last decade. Again reversion to the mean is a powerful force and that’s what’s been largely playing out this month. 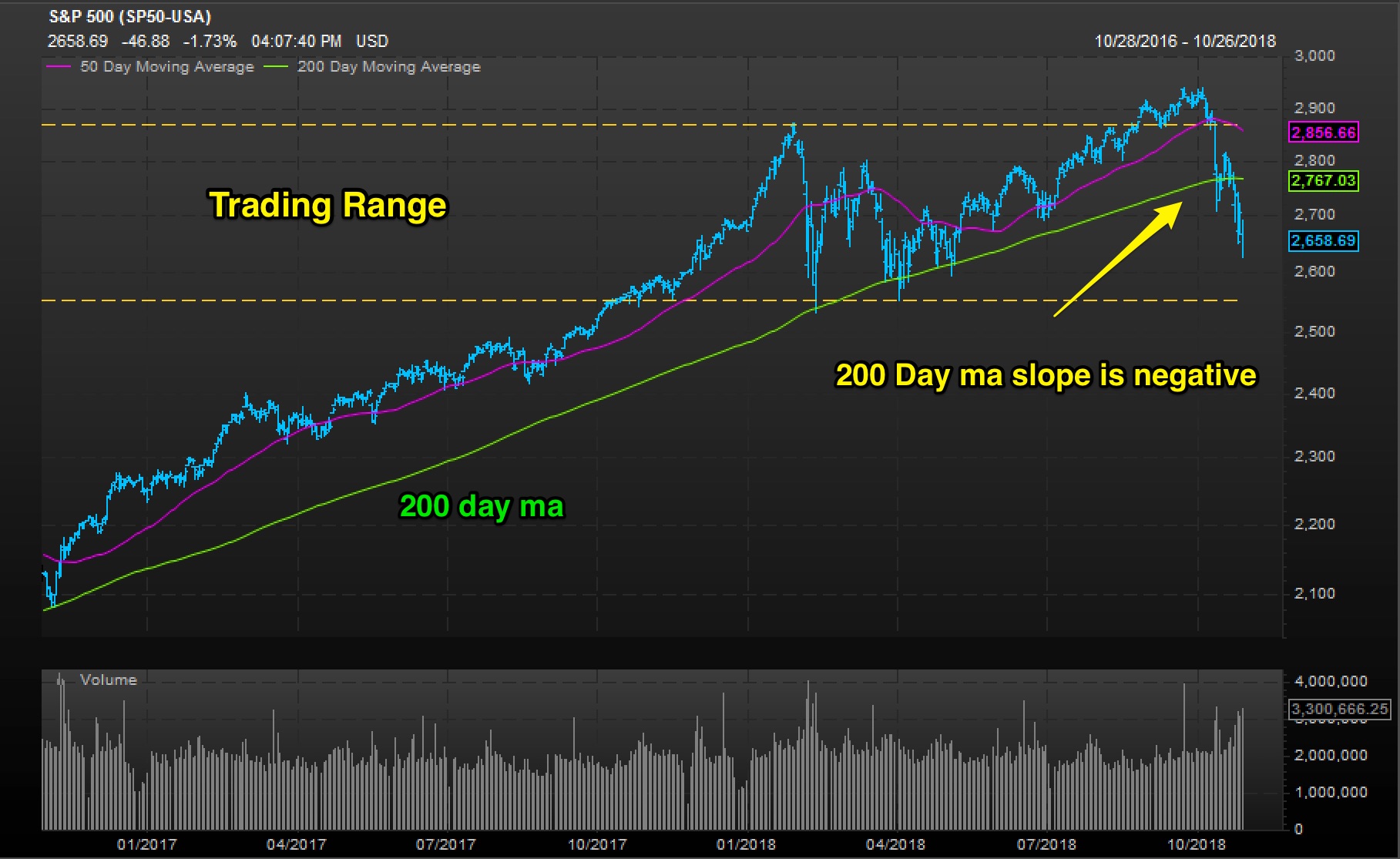 Given the technical damage and the fact that most long term moving averages now have a negative slope a V shaped recovery is unlikely. It will take some time to dig out of the hole and the supply overhead. Investors have memory and many will sell as they get close to break even. We’re deeply oversold so any good news can spark a rally but expect a lot of back and fill in the weeks ahead. Until broken on either side, the trading range above is likely home for a while especially as long as we’re living under the 200 day moving average.

The silver lining behind the darkening cloud over Wall Street is U.S. fundmentals are still strong. For the moment markets seemed have shifted focus from the 22% growth this year on the heels of a tax cut to the mid-single digit growth next year. Free Cash Flow yields continue to climb and current valuations while not compelling aren’t expensive either. Just how far away neutral is and the level of multiple contraction we have to endure along the way adds another brick to the wall of worry.