Home » Investment Management » Stuck Between the Fed and a Hard Place

Stuck Between the Fed and a Hard Place

Posted by David Nelson, CFA on November 5, 2018 in Investment Management | Leave a comment

On the heels of a bruising month, markets around the world put in a strong week with some of the hardest hit in Asia leading the way. There were a number factors leading the rebound including a bounce from oversold levels, short covering and some confusion surrounding potential trade talks with China.

The performance in Emerging Markets was good news especially when you consider that ultimately they are our customers. Of course, it will take more than a bounce from oversold levels to shore up confidence. U.S. investors are in market purgatory living in a trading range with the February lows and the September highs defining demand and supply. Investors have memory and stocks will have to claw through that overhead supply as sellers emerge looking to be made whole. 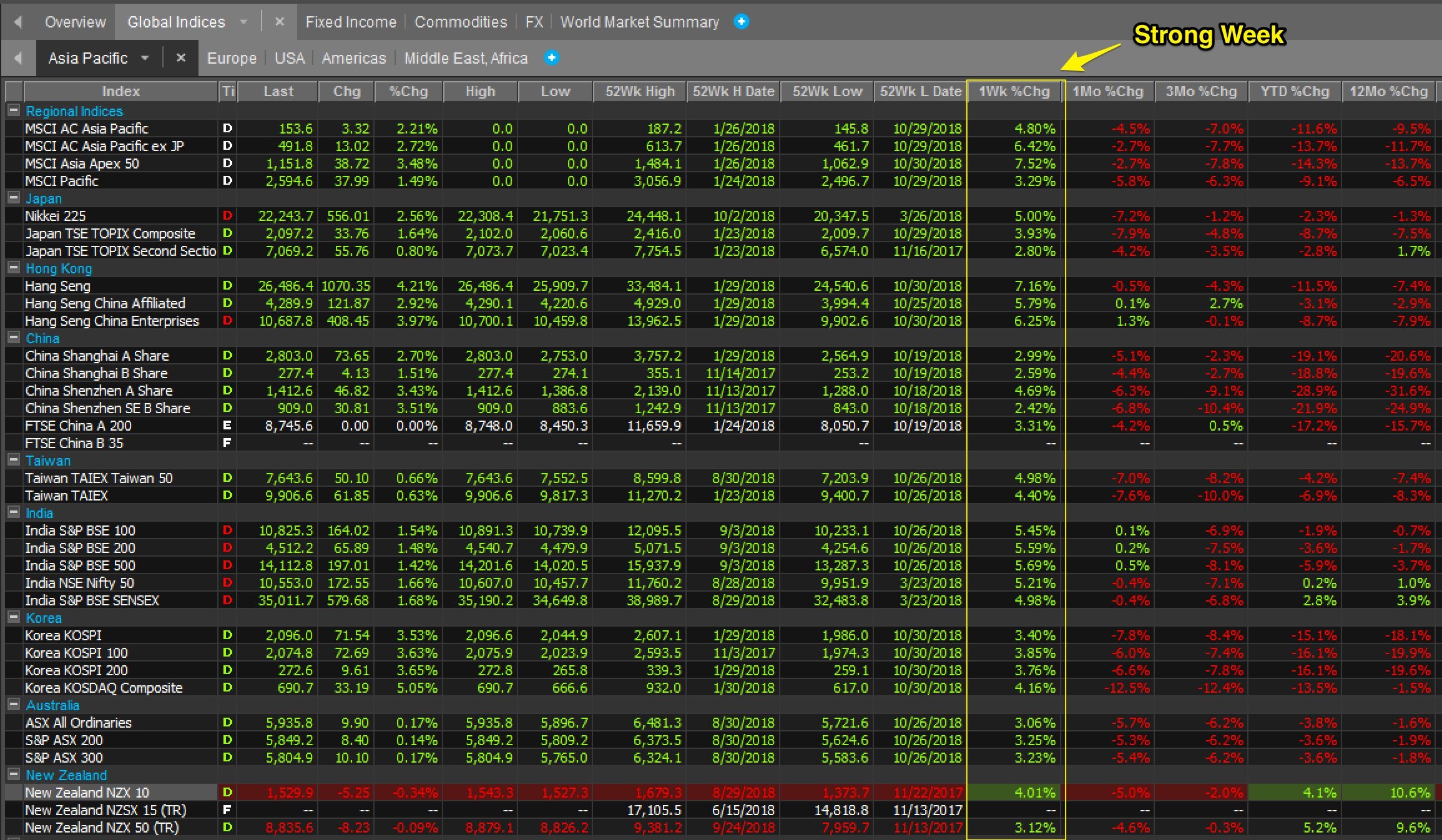 Of course, the question remains who has been doing all this selling. I’m convinced more than ever that what I brought up in last week’s post and conversation’s we’ve had here on the desk over the last month point to the problem. After talking to pension plan and insurance company operatives it became all too clear that the combination of rates breaking out gave these institutions an opportunity to de-risk swapping out of equities for debt. For the first time in a decade they could fund some of their future liabilities with corporate bonds. These are traditional fixed income investors who were force into overweighting equites by a Federal Reserve that kept rates at zero for much of the last decade. They saw the opportunity and took it. When you’re an institution making a large asset allocation shift you’re not necessarily price sensitive. It doesn’t matter whether Apple (AAPL) is 220 or 200. All that matters is that you get to the target.

Meanwhile, economic data still is strong. Friday’s job numbers has to be good news for workers, those looking for a job or maybe looking for a better job. The 250,000 headline number was well above consensus with wage growth growing 0.2% m/m. The more exciting metric was the same data point year over year coming in at over 3%.

Of course, that’s the good news and while much of the selling action was triggered by investor favorite Apple (AAPL) the unintended consequences of a better than expected employment report gave investors pause.

Stuck between the Fed and a hard place

It all but locks in December for a rate hike and in the coming days investors will be looking at the dot plots to see just how many hikes we can expect next year. Some like yours truly believe the Fed is on the cusp of a policy mistake. I’ve laid out the mind set in previous articles. For the last decade we’ve had comatose monetary policy. We have nothing in history we can point to that resembles the current environment. We all understand the need for normalization but it isn’t a race and with inflation close to target I believe the Fed can pause.

Lots of economic data ahead and of course a rate decision this week. To date Chairman Powell has been hard as a rock even in the face of a President who is trying to get his attention. All eyes will be looking to see if there’s any softening of the rhetoric in the release. Until we get a thaw investors are Stuck Between the Fed and a Hard Place.

For leadership this week, look to the emerging markets as a tell. They led the way down and we were the last domino to fall. Any stabilization in these markets will be welcome news for investors here at home.

None of the following is meant to be a political statement, just an observation on potential market reactions. Consensus has Democrats taking the House and Republicans holding on to the Senate. I believe this is discounted by the market and I think investors will look elsewhere for guidance if Tuesday night ends as expected. The two obvious outliers are Republicans holding on to both or Democrats flipping both the House and the Senate. If the latter happens I would expect some large Sector implications with Financials and Defense at the top of my list. Financials have benefitted from the rollback of regulations and of course Defense companies have seen the military budget swell. Any change in those metrics will likely be met with selling. In addition any attempt to unwind either corporate or individual tax cuts will also have market implications.