Are earning’s estimates starting to rollover?

Posted by David Nelson, CFA on November 12, 2018 in Press Appearance | Leave a comment

With a few unresolved close calls in some of the key battleground states, Election results came in as expected. The consensus outcome prevailed with Democrats retaking the house and Republicans holding on to the Senate. There are several issues that enjoy bi-partisan support including infrastructure and the lowering of drug prices but if Washington stays true to form I think most of these will succumb to partisan bickering as both parties look ahead to the 2020 Election.

With the uncertainty put aside, U.S. markets put in a second strong week on the heels of a miserable October. Most of the upside came from Wednesday’s post-election bump as shorts covered and investors piled back into their favorite names. Damage from the Apple (AAPL) quarter still hangs over technology like a wet blanket given how many other tech companies make up the supply chain and in some cases owe their existence to the Technology giant. 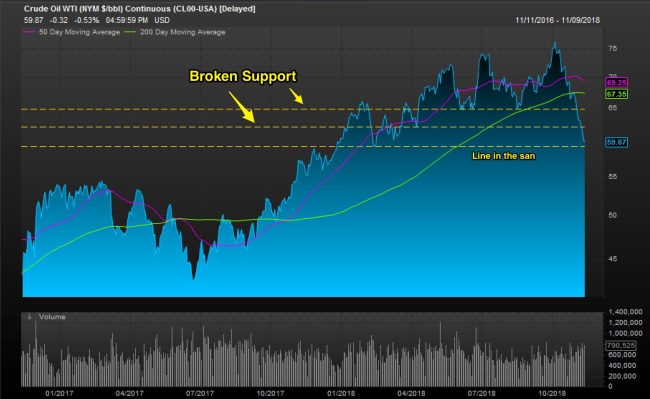 Never the less it was a good week as the rally cut across most sectors. The one glaring disappointment was Energy in a free fall since its October 3rd high. The combination of inventory builds here in the states and the administration’s granting of specific waivers to the Iranian sanctions contributed to the selloff. As of this writing Saudi Arabia is re-thinking supply considering production cuts to shore up prices.

The technical damage is still severe so we’ll have to see if the S&P 500 can move from living south of the 200 day ma to the North side of town.

As you might expect for the first time this year analysts are starting to pull in their estimates for 2019. It’s small at this point but needs to be monitored. Look, analysts get cautious in the same way investors do. In stark contrast the two sectors where analysts are actually raising estimates are Materials and Energy. Goldman’s David Kostin puts the increase at +8% and +6% respectively. The rise in materials estimates of course forces us to refocus on the Fed given one of their two mandates is to keep inflation at target.

There was no press conference following the FOMC rate decision last week. No one was expecting a move and there were few surprises in the release but most economists still expect a hike in December. As I pointed out in previous notes the asset allocation triggered by the recent rise in rates is starting to make its way around the street. I’ll repeat what I learned speaking to pension plan and insurance company operatives at the FactSet conference. With rates rising an increasing number of pension plans are able to meet future obligations using less equity and more fixed income. These are institutions that were forced to dramatically increase equity allocations as the Fed entered into a near decade of quantitative easing holding rates at artificially low levels. That dynamic at least for the moment is changing. The systematic selling we saw early in October was a warning of increased supply of stock for sale as rates move higher.

With earnings starting to wind down investors will look elsewhere for direction. Given Fed fears Wednesday’s CPI takes on added importance. Trade is still at the top of investor concerns and any change in the standoff between the U.S. and China could trigger a significant rally.

Despite an election defeat I would not expect a change in the administration’s mindset until there is a meaningful shift in Beijing. All eyes now are on the G20 meeting in Argentina where most expect President Xi and President Trump to meet. Both sides have a lot at stake. The President presides over a divided congress making it difficult if not impossible to advance policy while his counterpart in Beijing is struggling to shore up an economy showing increasing signs of distress. Almost anything can happen.

← Elections Have Consequences Did the Fed Blink? →