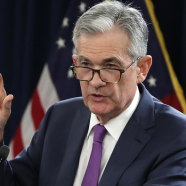 Did the Fed Blink?

Posted by David Nelson, CFA on November 19, 2018 in Investment Management | Leave a comment

Every Fed meeting from now on will be “live” for the possibility of a rate hike; said Fed Chairman Powell during a Q&A session Wednesday in Dallas. Out of step with that thinking Fed Governor Clarida told CNBC’s Steve Liesman that “nearly three years of increases have brought the Fed’s short-term interest rate near where it is neither restrictive nor stimulative.” Market participants have been forced to accept a different dynamic believing neutral and any hope of a pause was well into next year. Goldman’s David Kostin penned on Friday that the Fed is expected to tighten five times between now and the end of 2019.

So which is it? Inquiring minds want to know. Even Powell admits there are signs of slowing growth around the world. Really, hardly a revelation when you look at some of the data. Germany is in contraction for the first time since 2015, the problems in China are well documented and at some point the Fed will have to come to the realization that the U.S. does not operate in a vacuum. In a connected world any action by the Fed ripples through the global economy. With 40% of S&P 500 revenue off shore it doesn’t take long to realize that slowing global growth is a challenge for large cap U.S. multi-nationals.

Normalization is a given and the need to unwind a massive balance sheet is well understood. However, the pace at which the Federal Reserve manages this process is as important as the process itself. As we learned back in early October a massive re-allocation among asset classes goes hand and hand as rates move higher. Traditional fixed income players forced into equity over the last decade will return to the asset class of choice dumping stocks along the way. Able to match future liabilities with high quality corporate bonds many pension plans and insurance companies will take that option. It doesn’t mean they get completely out of equities but certainly a shift in allocation is warranted.

Despite a definitively negative week for stocks which at one point had given up all the November gains, there were some signs of an attempt at stabilization. There was similar action in the Emerging markets which put in a higher low. The iShares MSCI Emerging Markets ETF (EEM) is in a show me stage with prices right up against a down trend line in force since the highs earlier this year.

Despite my distrust of EM as an asset class given the unfriendly treatment of shareholders this may be the first sign post that will hint of a Fed ready to walk back some of its hawkish commentary. In addition to Clarida, Minneapolis Fed President Neel Kashkari said Thursday rates shouldn’t go up further. He agrees with Clarida that the Fed is close to neutral right now.

It’s been well documented how much growth outpaced value stocks over the last decade. Inside the S&P 500 the spread is almost 2:1 with growth stocks outpacing their value brothers and sisters by over 100%. Friday was a lesson in valuation support. NVidia (NVDA) AI darling of the growth crowd issued guidance Thursday evening less than expected.

The reaction was swift and severe sending the high-flying shares down nearly 19% the next day. Interestingly that same Thursday evening Applied Materials (AMAT) a semiconductor capital equipment company many remember from the dot.com era also offered dismal guidance. Management expects next quarter earnings to hit a midpoint of $0.79 nearly 18% below consensus at $0.93. Late trading Thursday showed both stocks were setting up for a miserable Friday session but by the end of the day it was a tale of two cities. While NVDA continued to slide AMAT found support finishing the day slightly in the green.

The difference – Valuation. NVidia (NVDA) on price/earnings or PE isn’t awful coming in at about 23x next year’s earnings. However, the growth titan generates little cash with Free Cash Flow Yield of less than 2%. AMAT in comparison is under 10x next year’s earnings with a Free Cash Flow Yield close to 10%. I’m not making the case for one over the other but pointing out that in times of stress investors search for a backstop and nothing shores up a leaking boat better than cash.

Long term holders of NVDA can still point to an investment up close to 1000% in the last 5 years. Never the less at least for the moment, once again cash is king.

We’re heading into a shortened holiday week with only a handful of companies left to report and only a handful of economic data expected. Maybe of more interest is Monday’s speech from New York Federal Reserve President Williams. He’s on record having said, he “sees ‘ways to go’ before rates pinch growth. That was back in early October. Let’s see if he has the same hawkish commentary on the heels of a nearly 1500-point slide in the DJIA.