State of the Market

Posted by David Nelson, CFA on February 4, 2019 in Investment Management | Leave a comment

With the President’s State of the Union scheduled for Tuesday now seems like a good time to discuss the State of the Market. January was certainly a great way to kick off the year especially on the heels of December, a month most of us would like to forget. Talking points  from my CNBC interview Friday sum up most of my thinking.

Look there’s no other way to put it. Fed Policy is still the elephant in the room and like it or not their actions can make a break the year. I think it’s fair to say that last year was a policy mistake and investors paid the price. They slammed on the brakes every time they saw strong economic data believing the best the United States can do on a sustainable basis is 2% GDP growth. Here we are a few weeks later on the heels of a monster 15% move off the Christmas Eve low and it begs the question what changed?

The biggest change is of course the Fed. To their credit Jay Powell and company shifted quickly as the data started to roll over. All it took was a word like “patient” and investors were quick to react, buying up much of what they had sold just weeks earlier. To be fair, we were at oversold levels with some technical indicators like the % of stocks above their 200-day moving average at lows associated with other market bottoms.

I think we all understand the need for normalization but in the face of subdued inflation, there’s little need to raise rates especially with the rest of the world close to zero. The focus should be on the balance sheet which still stands at over $4 Trillion. Letting $50 Billion even $35 Billion per month roll off was likely too much but it has to be something. Even if we bring it down another $1.5 Trillion, we’ll only be at 2010 levels, nearly 2x what we were in 2007.

So far, the earnings picture a mixed bag. Maybe the most interesting dynamic is that on average positive and negative earnings surprises are driving stocks higher and that’s unusual. Some sectors like Financials were priced for disappointment so any good news was going to drive them higher. The biggest concern I have: Earnings estimates are trending lower.

Two months ago, estimates for 2019 earnings were coming in at $176. Today, estimates have fallen to about $170. Not the end of the world but it’s something we have to keep watching 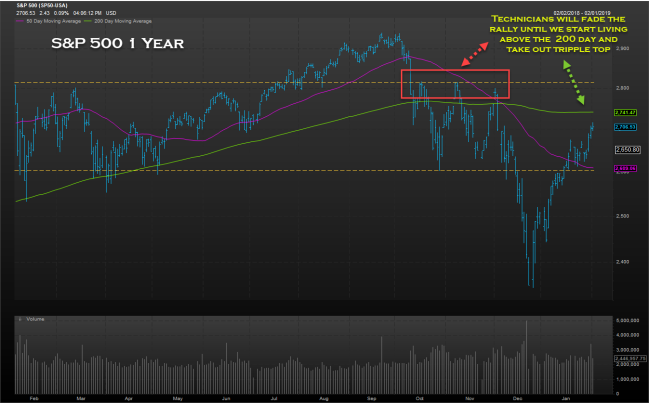 Technicians will continue to fight the tape until we start living above the 200-day moving average. We have an important triple top to get through just above 2800.

Currently I’m using a barbell strategy running two quant models. With one focused on value and the other growth, it helps smooth out some of the large sector rotations that have become routine. The value model looks for stocks generating high Free Cash Flow while the Growth model is very sensitive to estimate revisions. That pulls up all the usual suspects including tech names like WorkDay (WDAY)* and even an Amazon (AMZN)* Amazon will fall out of most estimate driven models given Thursday night’s mixed report and reduced guidance.

Growth has clearly been the leader over the last decade but given some of the stumbles in high flyers like NVidia (NVDA), I’m finding it safer to bet on both sides. Some names like Boeing (BA)* show up in both models.

Most of the economic data has been descent and at least up until now jobs data has been very supportive. (Friday’s report (304k) was a blowout and well above consensus. Some metrics like Unfortunately, some data like Consumer Confidence have been rolling over. Still at high levels but the last reading at 120 is the lowest level since July 2017.

Some economists are predicting a recession in 2020. Given what we’ve seen in the last couple of months, I’m surprised anyone is making predictions beyond next week.

Given the rhetoric it looks like both sides want to get a deal done. The President needs a win politically and given recent data, China’s economy is clearly struggling. Their last PMI report shows manufacturing in continued contraction.

Trump and the negotiating team need to be careful here. I suspect President Xi is willing to buy a $Trillion in U.S. goods to help close the deficit but the one thing they’ll try to avoid is discussion that centers on forced technology transfer or protection for intellectual property. While the math doesn’t work for China given their huge surplus the one advantage they have is time. We think in terms of an election cycle and they think in decades.

It’s important to remember that we aren’t dealing with a partner or even a competitor. This is an adversary in every sense of the word. Trade, the economy, foreign policy and yes even militarily. Even after a deal is done they will likely cheat and we’ll be forced to do this all over again.

We’re about half way through earnings season with some big names still left to report, including Alphabet (GOOGL) after the bell Monday. To date, on an equal weighted basis positive vs negative surprises come in at 66% and 23% respectively while top line beats stand at 32%. Of course, all of this is backward looking. Guidance on the earning’s calls have been more important than the headline numbers.

State of the Union

Investors will have plenty to focus on Tuesday night when the President delivers his delayed State of the Union. China, Trade and NAFTA top the list with direct implications for Autos, Manufacturing and the Farm Belt. The media will spend most of their time on the hot political topics including the wall, abortion and the Mueller investigation but you count on me to stay focused on what matters for your money.

*At the time of this article some funds managed by David were long BA, WDAY  and AMZN.