Posted by David Nelson, CFA on March 4, 2019 in Investment Management | Leave a comment

The chart says it all. You can’t get any closer to the resistance line of the S&P 500 without crossing it. For several days, stocks have been threatening to break into the promised land but to date have failed to cross the border. A successful breach doesn’t mean we’re off to the races. A lot of good news is priced into a market up over 19% from the Christmas Eve low. The data is still mixed. For the time being investors have decided to treat good news as good news and bad news as it could have been worse. 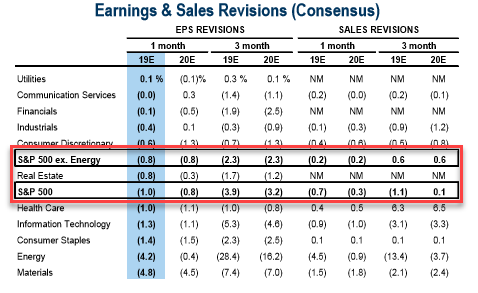 Before we can sound the all-clear siren earnings estimates for the year need to stop their descent. Stocks can’t continue on I-95 North with earnings revisions headed South. Eventually there’s a pile up with investors forced into triage.

Even when we back out energy, EPS and sales revisions have come down over the last month. To be fair, as I pointed out on CNBC’s World-Wide Exchange with Brian Sullivan last week, the Fed did their best to slow things down last year and to a large extent they succeeded. The only conclusion I can draw from the price action is that given the change in rhetoric and a Fed that clearly has come to the aid of investors, the back half of the year is going to look a lot better than analysts believe.

We’re only two months in with most major indices up double digits. I think it’s a given the pace is going to slow dramatically before too long. It would be nice to maintain the current rate of change but of course that implies we would be up over 70% this year. 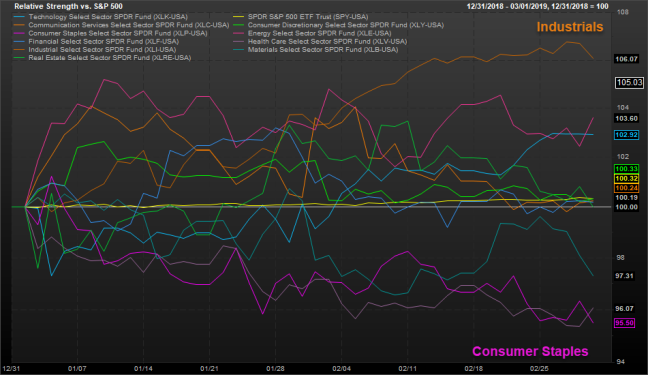 Big moves to the upside make sense on the back end of a near free fall but now it’s back to digging out gains a few yards at a time. Surprisingly, leadership has come from cyclical stocks led by industrials in the pole position with technology and energy in a dead heat for number two. The laggard’s utilities and consumer staples are up just over half the return of the broad index.

Not exactly the kind of price action one would expect if a recession was just around the corner. 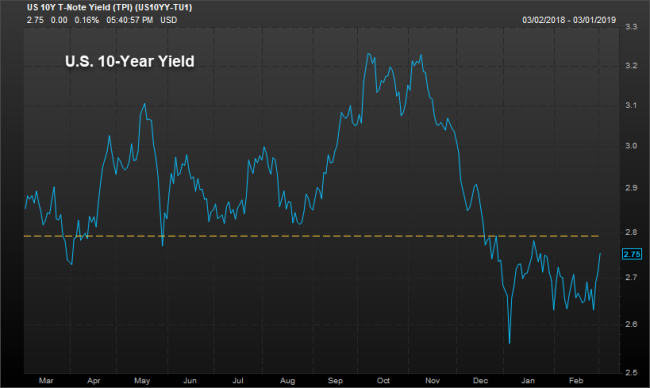 The President likes to jawbone markets as well as individuals. Last year, we witnessed the battle between President Trump and a Fed that insists they are independent. Trump was unhappy with the near auto pilot approach to raising rates and made his displeasure known. He hasn’t stopped with the Fed. Just a few days ago he weighed in on the crude markets tweeting OPEC to ‘relax and take it easy’. Here we are just a few days later and he’s chiming in on the dollar saying; “it’s too strong”.

Despite what some believe, Chairman Powell and the Fed’s decision to reverse course was data driven and not due to any political capitulation. Markets are a pretty good leading indicator and they were screaming for the Fed to pause and become as they say “patient”. Financial conditions had softened and there was little need to raise rates in the face of inflation expectations largely contained.

Putting it all together, stocks are probably just about where they should be. The S&P 500 is just over 16x forward earnings and if rates can stay at or near current levels stocks should still be the asset class of choice. Having said that, don’t expect anything close to what we’ve seen in performance the last 8 weeks. In a world where every corner of the planet is a geopolitical hot spot and the climax of the most important trade negotiation in a generation just around the corner, almost anything can and will happen.

← U.S. is the best house on the block What’s the next catalyst for the market? →