Bonds in a Bubble

Posted by David Nelson, CFA on August 19, 2019 in Investment Management | Leave a comment

On the heels of an 800-point plunge in the DOW Wednesday, stocks regained their footing closing out the week on a positive note. Friday’s bounce helped us enjoy the weekend but not enough to wash away some of the negative headlines that hang over the market like a dark cloud. Negative rates abroad and an inverted yield curve here still dominate the news cycle.

The confusing message sent by the administration did little to clear up the picture. It’s fair to say we saw something of a capitulation with the President delaying at least temporarily the 10% tariff on the remaining $300 Billion of Chinese imports. The rhetoric focused on the U.S. consumer, but the real fear was the message from the market.

With polls pointing to Americans increasing distrust of China, trade has become a bipartisan issue. Now both sides of the aisle seem to echo something must be done to challenge the world’s second largest economy and increasingly our biggest adversary.

Right now, markets are kind of in a no man’s land. There’s enough good news to keep investors in the game and enough bad news to make for sleepless nights. Let’s look at the landscape and what we we’ll be dealing with in the weeks and months ahead.

Earnings season is all but over and as usual most companies beat expectations. Hardly an accomplishment given CEOs have spent most of the year talking down the numbers. Add the fact that my favorite indicator estimate revisions are still on I-95 South it’s easy this dynamic has to change if we’re going to avoid an earnings recession.

Last year EPS for the S&P 500 came in at just shy of $161. Unfortunately, expectations for 2019 have been declining since September last year and this month is no different. If we extrapolate the pace of decline for the first half of the year on a percentage basis to the second half, we’re looking at negative year on year growth.

Which is the better asset class 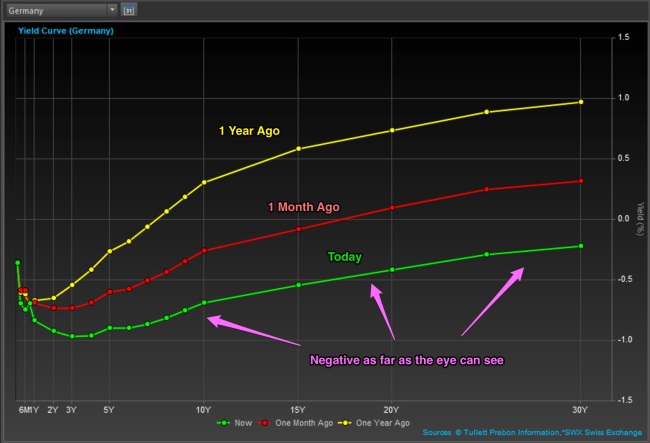 The focus on the inverted curve is legitimate but can’t be looked at in a vacuum. There’s of course history that signals a rising possibility of a recession when the spread between the 10 year minus the 2-year yield is negative. However, with rates for Germany now negative as far as the eye can see it’s not surprising that investors would flood into our bonds as a safe haven to capture yields that still start with a plus sign.

While equity investors take on more security risk, the dividend yield of the S&P 500 well above the 10-year yield offers a lot of support. I’ll leave it to the talking heads to argue over which is the safer asset class. With yields at historic lows and institutional investors willing to accept a negative rate of return I think the asset class in a bubble is visible to all but the blind.

Technically we need some improvement. When we glance at a standard chart, we can see the index is still living above the 200-day moving average and sits less than 5% from the all-time highs. The rising slopes in the long-term averages adds to the support.

To get a more in-depth picture on the market I often turn to the NYSE Bullish Percent Index which compares the percentage of stocks on a point and figure buy signal vs those on a sell signal. When the the chart is in a column of zeros the number of stocks on a sell signal are rising. Admittedly, point and figure charting is for technical wonks but is still a good indicator on whether the offense or defense should be on the field. For the moment the bears are still in control able to easily push the market lower especially during the summer months when half the buyers are camping out in the Hampton’s.

I think it’s safe to say over the last few months the picture has deteriorated just not enough to push us into a full-blown correction. We still have a dovish Fed that has all but guaranteed more cuts as the year unfolds. Currently my radar is focused on inflation making sure that benign back drop doesn’t change forcing the Fed to back off from their present course. Last Tuesday’s CPI was hot coming in at 0.3% just above consensus. Not enough to change Fed sentiment but you can bet it’s on their radar as well.