Posted by David Nelson, CFA on January 13, 2020 in Investment Management | Leave a comment 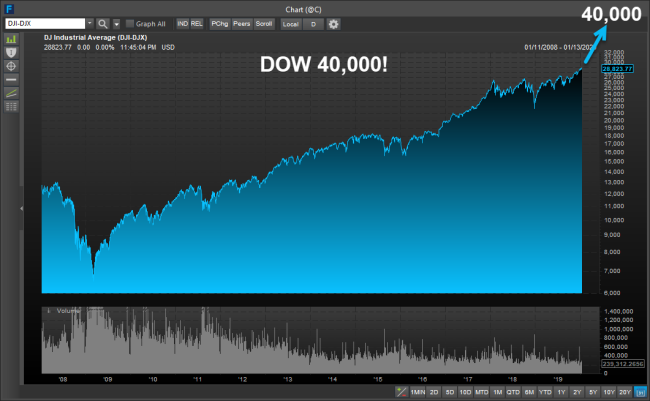 Less than two weeks into 2020 investors have shrugged off the killing of Iranian Quds force commander Soleimani, a rocket attack on a U.S. installation, the accidental downing of a Boeing 737 in Iranian airspace not to mention a major news service saying the risk of nuclear war is growing. Add a December jobs report coming in shy of expectations, stocks trading at all-time highs is not the first image one would expect.

Yet give or take a few points that’s just where we are. The coming recession the media was so obsessed with just months earlier never materialized. In fact, leading economists like Goldman’s Jan Hatzius and John Mericle write “…we see the economy as structurally less recession-prone today.”

Well OK then. Nothing to worry about. Onward and upward to DOW 40,000!

If only it was that easy. Any investor that’s been doing this for a while in fact most reading this post know there will be challenges no matter how easy the ride seems right now.

My top two concerns are a Federal Reserve telling me the $100 Billion per month rise in the balance sheet isn’t QE and an election that could potentially upend an economic system in place since the dawn of the republic. If history is any guide the biggest risks are the ones we can’t see.

At the start of a new year investors often adjust allocations and reposition. The danger of course is extrapolating forward recent returns. Years like 2019 don’t come around often so before completely ditching your current allocation to add risk do a little soul searching.

If you’re like most investors your bull market benchmark is the S&P 500 or Amazon (AMZN) which is ever up more and in bear markets CD’s or T-bills. We’re making light of it but all in your allocation needs to work in both.

Traditionally that means a balanced account with a mixture of low-correlated asset classes. Today you can combine a fully tactical portfolio designed to avoid drawdowns with an MPT (Modern Portfolio Theory) strategy getting the best of both worlds. While tactical strategies are designed to sidestep market hiccups the combination with MPT offers a more traditional return stream while still offering a fair amount of protection.

I’ll be diving into this in more detail in the weeks ahead, but my overall message is that Risk is Not Dead!