Posted by David Nelson, CFA on July 13, 2020 in Investment Management | Leave a comment

In the face of rising daily infections throughout much of the U.S. last week was a strong one for risk assets. We continue to march forward with plans to reopen the economy, but the recent viral surge has called into question plans for Fortune 500 companies to get back to business.

Disney (DIS) reopened its Orlando resort and for the most part reviews have been good. Some guests interviewed said they felt safer on the grounds of Disney World than at their local supermarket. Employees and guests must wear masks and go through a temperature screening before they enter the park.

Hugs from Mickey and Goofy are no longer available but the tradeoff is short lines and likely a chance to see a lot more of what the wonderful world of Disney has to offer. Josh D’Amaro, chairman of Disney’s parks, recreation and products division in a recent interview said; “this is the new world that we’re operating in, and I don’t see that changing anytime soon. ”

The challenges Disney (DIS) faces are like those of most close proximity businesses. How do you get back to previous revenue levels when forced to serve fewer people in a given day? The answer is you can’t. Raising prices is an obvious solution and I’m sure one discussed in every board room but seems remote until conditions improve and discretionary spending is assured. 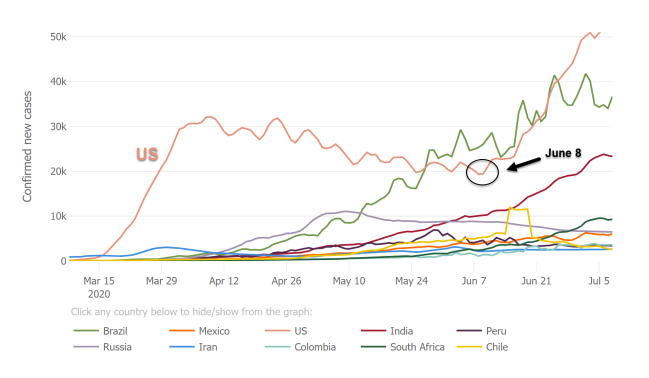 The recent data from Goldman’s Jan Hatzius and his team show the spiking daily infection rate is already taking its toll on retail and recreational activity. Through last week current quarter real GDP estimate data was holding at +18% but could deteriorate quickly if we don’t bend the so called COVID viral curve.

Sure, we could shut down the economy again and pay the price of cratering GDP. A better path would be to start taking seriously the simple safety guidelines laid out by the CDC. The following is just an observation and not backed up by a scientific study but here in CT mask and social distancing requirements are lax. As I pointed out in my post from last week few under 30 in my own apartment building wear a mask and seem irritated if suggested to do so.

However, public companies seem to have gotten the message. Whole Foods a subsidiary of Amazon (AMZN) compliance is mandatory. An employee stands with a counter monitoring the number of customers while acting as gate keeper for the store. LuluLemmon (LULU) much the same. A recent visit showed social distancing guidelines were well enforced.

We can either do the minimum or be forced to do the maximum as state and local governments reimpose shutdowns an inevitable outcome of dwindling hospital capacity. We haven’t been faced with it yet, but I put forth there are limits to just how much monetary and fiscal stimulus markets will accept.

TINA – There Is No Alternative

The elephant in the room is still the Federal Reserve and a balance sheet that rivals Mt. Everest. Forcing the risk-free rate to zero has effectively killed off any concept of balanced investment. The 60/40 portfolio is dead or dying. The good news is that by eliminating an asset class we’ve managed to hold up equity markets enforcing the TINA principle.

Of course, this works right up until the time it doesn’t. What if industry realizes the only way to make up for decreased unit sales is to raise prices challenging the Fed’s other mandate inflation? What if bond investors wake up and demand more than the lousy 64 basis points you get from a 10-year treasury?

We can debate the method and even the timetable to re-open the economy a conversation that will be the center of the upcoming election. What isn’t up for debate is the need to wherever possible get back to work. Yes, we need to do it safely and yes, we need to protect those most at risk, but fiscal and monetary policy is not infinite. TINA

← Another Brick in the Wall of Worry Red Zone →