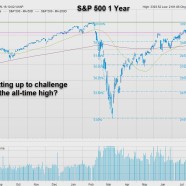 Posted by David Nelson, CFA on August 3, 2020 in Investment Management | Leave a comment

Last week capped off another powerful month for the broad indices setting up a potential challenge to the all-time S&P high set in February. Of course, the NASDAQ is already there in large part powered by the 5 largest companies (APPL, MSFT, AMZN, GOOGL & FB) that all hit highs in July even if they didn’t close there.

With the top 5 stocks representing 23% of the market cap and just 16% of earnings investors have a right to be nervous asking if there’s too much concentration in a relatively small handful of securities. In large part valuations are being supported by a zero-interest rate policy. Fortunately, the first part of securities analysis starts with the risk-free rate. Stock valuations don’t live in a vacuum and relative to other asset classes are still attractive. A 1.9% dividend yield in the S&P 500 doesn’t look that bad when compared to a paltry 53 basis points available in a 10-year treasury.

I often get asked; is the retail investor ever going to come back? I was surprised to find that not only are they back but as strong as ever. Goldman data this week showed retail trading in June was the largest on record nearly 3x what it was in June 2019. The top 4 brokers averaged 8 million trades a day. 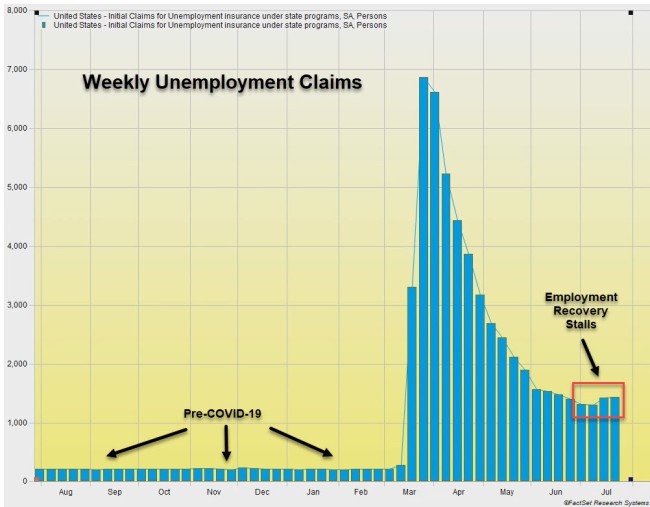 The top-heavy market cap indices like the S&P mask some of the economic pain as some states continue to struggle. It’s clear that the virus is starting to moderate on a national scale, but recent data put out by Goldman’s Jan Hatzius and team shows that 80% of the U.S. has either tightened restrictions or placed the reopening on hold. The above reverses or at least halts some of the progress made in in recent weeks. In that context it will be difficult for some parts of the economy to improve much less return to normal. The weekly unemployment claims are stubbornly above 1.4 million with continuing claims coming in at just over 17 million.

Close proximity businesses are hit the hardest. Even restaurants that have opened for dining perhaps outside like here in Greenwich CT, are running at a fraction of capacity as are airlines, theme parks, hotels etc.

This hits service industry employees making the now expired unemployment benefits the only lifeline. It’s a given that almost every aspect of our society is politicized and unfortunately shines a spotlight on the stalled negotiations.

There’s no shortage of friction points but perhaps the biggest is the expiration of current unemployment benefits. A big stumbling block is the insistence from Speaker Pelosi and Senate Minority Leader Schumer that the $600 weekly benefit be extended to January. Treasury Secretary Mnuchin countered saying on ABC “We absolutely agree on enhanced unemployment. We want to fix the issue where in some cases people are overpaid, and we want to make sure there’s the right incentives.”

Each of us come at this from their own political mindset but I fail to see how you can entice someone back to work if their unemployment benefit exceeds their salary.

The United States just printed the worst quarter GDP data on record falling a massive (-32.9%). Economists are expecting a big jump in Q3 but already estimates for the 4th quarter are starting to slip and if America doesn’t get back to work soon estimates for 2021 which had been improving will be a memory.

With the short end of the curve effectively at zero reporters have repeatedly hit Fed Chair Powell with questions about the possibility of the Fed turning to negative rates as a policy tool. How many times have we heard Mr. Powell say they have no intention of following in the footsteps of Europe? Not so fast. Maybe Jay doesn’t think it’s a possibility but increasingly economists are starting to buy into the concept that eventually the Federal Reserve will do precisely that. Wall Street is already placing their bets on a potential push below zero by early 2021. Twenty eight percent of economists surveyed believe the Fed will use negative rates by the April 2021 meeting.

Are we going to repeat the same mistakes?

After receiving $25 Billion in aid under the first stimulus package airline execs are already back hat in hand asking for more. American Airlines CEO Doug Parker has already made the trek to Washington laying the groundwork to lobby lawmakers.

Effectively taxpayers are being asked again to bail out investors and bad management teams. After taking the helm in 2013 following the merger of US Airways and American Mr. Parker oversaw the buyback of more than $12.9 Billion of the company’s shares while at the same time delivering negative ($5.6 Billion) in Free Cash Flow. Cash on the balance sheet has gone down almost every year from over $10 Billion to less than $4 Billion. These mindless buybacks are usually designed to make it easier for CEOs to hit performance compensation targets and of course do nothing to organically grow revenue or net income. It only gooses earnings per share because you are reducing the share count.

At the very least, if we take this path Taxpayers should end up with a big chunk of the equity and explore some type of executive compensation claw back.

A lot to digest as we head into the dog days of August. Disney’s (DIS) report Tuesday will be a highlight along with ISM manufacturing and services ending the week with the all-important Job numbers Friday.

Have a great week.

*At the time of this post some funds managed by David Nelson were long AAPL, GOOGL, MSFT, AMZN & FB

← Step 3 in the fight to save capitalism Apples and Elephants →