Posted by David Nelson, CFA on February 1, 2021 in Investment Management | Leave a comment

At the start of 2021 analysts, talking heads and investors were focused on the year ahead and what the economy would look like on the other side of a vaccine rollout. The pandemic breakout of 2020 brought world economies to their knees and capital markets to the brink. Investors who looked into the abyss and held on to their belief in a market economy were rewarded once again. Today those same investors feel like veterans looking forward to a return to normalcy as economies repair and the world goes back to work.

Of course, normal takes on a different meaning for all of us but for buy and hold investors finding good companies with a great product or service was the goal. It’s at the top of the playbook for legendary investors like Peter Lynch and Warren Buffet.

The GameStop (GME) frenzied buying of the last couple of weeks looks to challenge that concept using shares as a weapon to change social order or bring down the perceived enemy, hedge funds and short sellers. Even Tesla CEO Elon Musk whose company was often a target of short sellers got in on the action with the following tweet – Gamestonk!

The fact that some of the target companies are devoid of fundamentals or have business model’s incapable of surviving in today’s world means nothing. The only thing that matters is winning the battle. 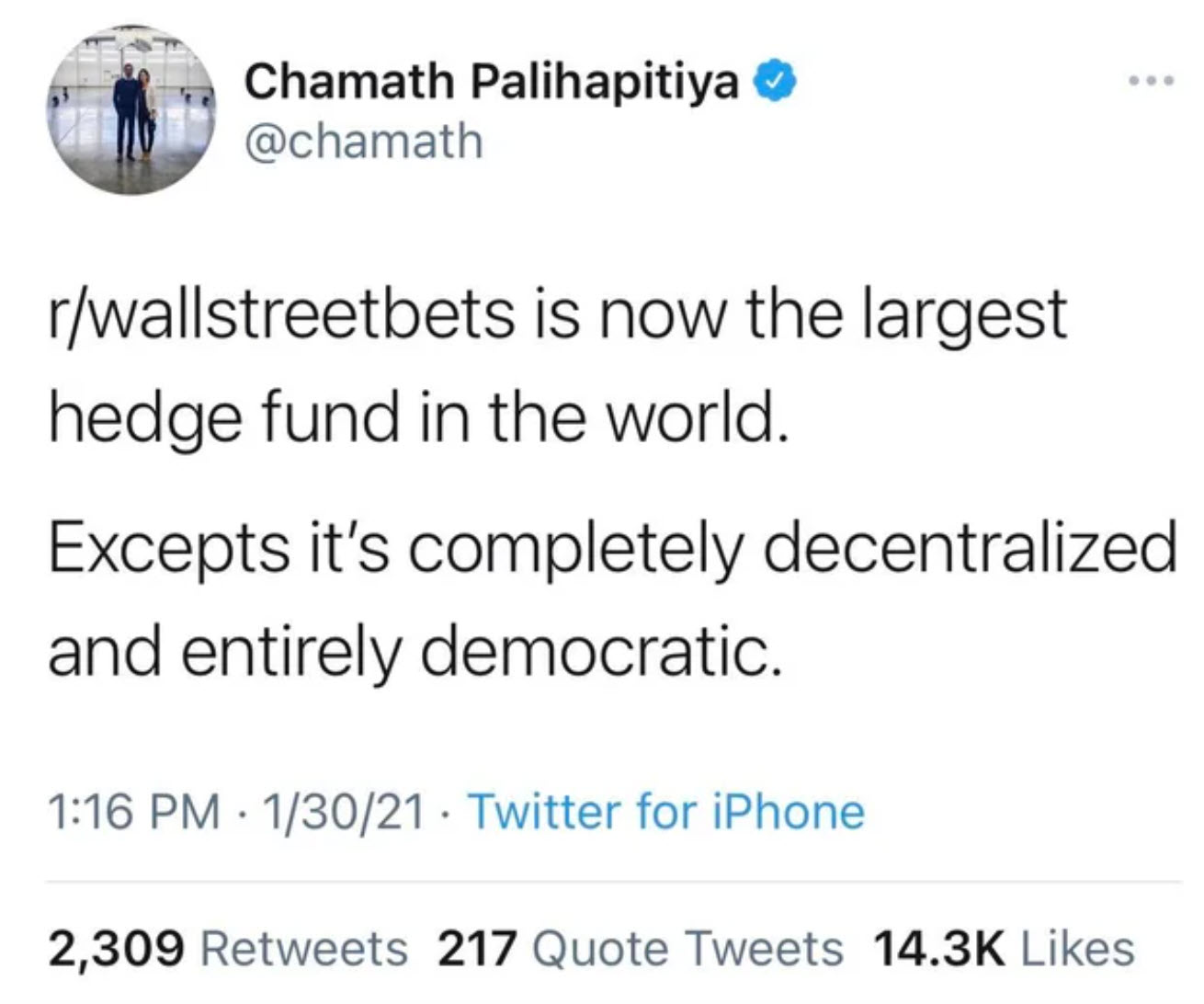 That’s certainly not a new concept for Wall Street. It cuts to the very heart of the Darwinian world of capital markets. In the world of social media however, mass cooperation is likely not a crime. Using social networks like Reddit, followers cheer each other on taking it to the big guy.

r/wallstreetbets at 7.1 million members is one of the largest communities on Reddit and where many of the posts originate. Famed investor Chamath Palihapitiya called them the world’s largest hedge fund. Of course, if you or I talk on the phone about manipulating the price of a stock we’re going to jail.

Many of the testimonials tout infinite potential and a new world order. While many, even most may be fervent in their desire to change a system they believe is unfair you can bet there are professional forces at work throwing gasoline on the fire.

The thesis behind shorting GameStop (GME) is well understood. An old-line retailer selling a product that essentially has moved off the shelves into the cloud. Without a change in the business model eventually the company has no future. 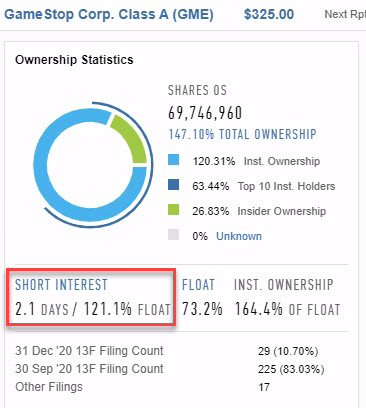 The initial thesis behind buying is just as compelling. With short interest ballooning to over 100% of the float the bull trade was as easy as walking into a crowded theater and yelling fire. A stampede is inevitable, and people get hurt. This time it was hedge funds and it goes with the territory.

With short interest still high it tells me hedge funds that have covered are being replaced with other short sellers setting up a battle to see who is going to blink first. At some point GameStop longs will be faced with the ultimate question. Is my quest to be part of a movement bigger than my desire to lock in huge gains?

Market history is filled with examples of technology changes that have altered the course for investors. Maybe not exactly technology but Reuters News was the first to use carrier pigeons in 1850 to deliver stock prices to subscribers giving them a distinct edge on trading.

The telegraph, radio, telephone, computer and of course the internet were all technological advances in the flow of information. Each time investors have been forced to cast aside old tools and adapt to that change.

All of this begs the question is social media just another tool we must learn to use and in the end all technology is good or is this different and needs to be regulated or worse shutdown?

There’s nothing social about social media

Facebook and other popular social media platforms have morphed from the town square to a virtual battlefield where even friends and family throw hand grenades into your back yard. Twitter, Reddit, and other more public platforms can be even more dangerous as cancel culture can end a business or even a career. If this doesn’t fit your concept of a social network ignore my rant but many of us are finding a better life off the grid.

Back to GameStop and what’s coming next. As you can see in the chart origins of the battle seem to start in mid-August last year. Volumes were increasing and short interest was extremely high. Some well-known short sellers like Andrew Left of Citron research had put out calls they expected the stock to fall dramatically.

This was of course blood in the water for the Reddit crowd as they devoured the flesh of any short seller massing together driving up shares leaving most professionals including yours truly looking on in disbelief. In the last several years social media has been accused of being a tool to drive wedges into our political system. Why should the capital markets be any different and just how much are they at risk?

My concern isn’t GameStop (GME) or the failure of some hedge fund but the systemic challenge if the decision is to end one of the tools capital markets use to keep the game honest. It wasn’t the SEC or some other regulatory body that discovered Enron was a fraud. It was the hard work done by short sellers and analysts that rooted out the corruption. It’s the short seller who scrubs the data pointing out company A is cooking the books. It’s the short seller who provides the fuel for a continued rally in stocks as the next incremental buyer who covers their position as the economic fortunes get better.

Are their hedge fund bad guys who use nefarious methods to drive down stocks? You bet there are, and they should be prosecuted each and every time.

Capital structure is everything and if investors start to feel market structure is at risk, they will pick up their ball and go home. The hedge fund that is short one stock to offset risk in their Apple (AAPL) long position is likely to exit both. I think we got a taste of that last week.

Perhaps shares of companies have become nothing more than playing cards of investor sentiment and hysteria. The social media crowd may win this battle but, in the end, will it be a victory? At some point they may be the only ones playing the game. Will all the cheering and hope for limitless gains be enough to hold up the shares when all the shorts are gone? Who will be the first to sell and how big will the avalanche be when they do?