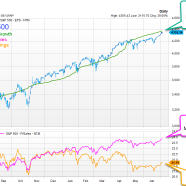 Posted by David Nelson, CFA on July 6, 2021 in Investment Management | Leave a comment

With the first half of the year in the rear-view mirror I thought it would be a good time to share some conversations taking place on the Belpointe Trade Desk.

You can’t buyback your way to growth

Last week United Asset’s Tom Healy and Matt DeLorenzo were guests on our weekly D Squared show. Matt and Tom shared a chart similar to the one above correctly pointing out that while stock prices have pushed higher so have earnings. Over the weekend I decided to dig a little deeper and insert another metric price/sales to add more context.

As you can see the Price/Earnings, or PE ratio has held steady in part justifying the recent rise in equity prices. However, Price/Sales has moved steadily higher over the last year. Improved margins could add to the bottom line but doubtful given the recent rise in wage inflation. We are forced to look elsewhere for the answers.

Companies are buying back stock at a record pace. Goldman’s David Kostin pointed out in a recent note, share buyback authorizations YTD have reached a historical high of $590 billion led by Apple’s $90 billion and Google’s $50 billion programs.

It’s important to note that buybacks do nothing for revenue or even net income. It only inflates EPS because the number of shares outstanding declines. The management talking point is that they are returning capital to shareholders. For many CEOs it’s the easiest way to hit earning’s Earnings Per Share targets an often-used performance metric to determine CEO compensation.

None of this is new but unsustainable for many companies. IBM was the poster child of this type of behavior for more than a decade. The company has been a serial underperformer for years having spent much of their capital buying back stock to prop up earnings per share rather than investing in the future.

As most of you know wasteful buybacks are a hot topic for me having written about it in several articles over the years. I’ll be adding another in the series shortly and trust me the math doesn’t lie. The earning’s growth we see in some of the most popular S&P 500 companies is a mirage made possible only through the financial engineering of crafty CEOs.

The Federal Reserve’s dual mandate goes all the way back to 1977. Tasked with the challenge of effectively two goals, maximum employment and stable prices, monetary policy was implemented with a limited set of tools. The era of Bernanke, Yellen and now Powell opened a Pandora’s box of other strategies including quantitative easing and an expanding balance sheet providing whatever liquidity was needed to meet the challenge.

Today they are taking their biggest gamble in letting short term inflation run well above historic norms. Believing the high prices we see in just about everything we consume is transitory they continue to purchase $120 Billion per month in bonds and mortgages while keeping short term rates effectively at zero. For the moment markets are taking them at their word marked by an occasional tantrum like last month’s reaction to the FOMC announcement. Some Fed governors had moved from not thinking about thinking about a rate hike to thinking about it. In the aftermath the liftoff for rates got pulled forward to 2023.

On top of an $8 Trillion Fed Balance Sheet Washington is set to add $Trillions more in stimulus adding to the $Trillions spent in Covid Relief programs last year. With inflation expectations at the highest levels in years all eyes will be on future CPI and PPI monthly data. Energy, commodity prices and even housing can turn lower very quickly but wage inflation is sticky. Difficult for employers to take back what is already on the table. Here in CT several industries are offering signing bonuses to new employees a situation I am sure is echoed throughout the nation.

With still few alternatives for cash, equity markets continue to see large inflows. The S&P 500 has seen a steady rise but underneath the surface investors have been scrambling from one secular trade to the next. The small cap and value outperformance in the first quarter effectively the reflation trade weakened in the 2nd quarter as Technology and other growth assets outperformed in the final weeks of June.

Employment continues to improve but a drill down unmasks some of the flaws in the headline numbers. June’s strong growth in payrolls +850,000 was offset by weaker than expected labor participation rate and in part explains the uptick in the unemployment rate to 5.9%.

Economies around the world continue to reopen with mixed results. While Covid concerns here are declining, other parts of the world are seeing large spikes that need continued monitoring.

The biggest risks we face are similar to what we have dealt with all year.

Glass is Half Full

Before we go too far down the rabbit hole of what we don’t like it’s important to remember technology continues to advance opening investors to exciting new industries. The changes in just our energy and automobile complex alone offers investors unique investment opportunities. The roll out of 5G, the internet of things, artificial intelligence and the cloud are all still in their early stages. Capital markets will certainly be a beneficiary in the years ahead.

We’re still a week away from the kickoff of earning’s season. The setup seems similar to last quarter with analysts playing catch up raising estimates into the release. I suspect as it was then companies will need to deliver outsized positive surprises to drive price momentum higher.

The economic calendar is light, but Wednesday’s FOMC minutes always has the potential of moving markets. Have a great rest of the week.