Home » Investment Management » The only thing going up faster than stocks 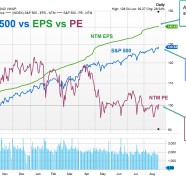 The only thing going up faster than stocks

Posted by David Nelson, CFA on August 30, 2021 in Investment Management | Leave a comment

The Bull Case – The only thing going up faster than stocks are earnings. A year ago, 12-month forward earnings were about $150 and today estimates project $211 a near 40% bump. The S&P on a price basis is up 28% and 31% if you count dividends. All during that time the forward PE ratio has been in relative decline. Still rich by historical standards but do you really want to buy a U.S. treasury instead. Do the math. The bubble is in bonds not stocks.

Despite the relatively bullish scenario quarter to date investors have put the defense on the field. Best two performing sectors have been Utilities (XLU) and Healthcare (XLV) normally not risk on trades. In addition, Large Cap Secular Growth has retaken the lead passing both Large Cap Value and Small Caps year to date. Goldman points out for most of the quarter mutual funds which are having a good year added significantly to high quality names in part as a response to COVID data and deteriorating hospital capacity.

Of course, the above is easy to see in the rear-view mirror but the data supports the monster run we’ve seen in stocks this year.

It’s not surprising there’s been so much focus on Jackson Hole and literally every word out of Jay Powell and the rest of the FOMC crew. More than a decade post the financial crisis, monetary policy is still a major factor driving equity returns. The Fed’s biggest mandate has been to eliminate the business cycle and to a large degree they’ve succeeded.

In a vacuum stocks have pushed the envelope on valuation but relative to other investments it’s still the better asset class. In the end, most valuation models start with the risk-free rate. Relative to a 10-year yield still under 1.4% the greater than 4% Free Cash Flow Yield of the S&P is the better deal. Yes, stocks have continued to hit new highs, but forward earnings estimates have climbed right along with prices.

The Bear Case and biggest risks for the market

Most of the data suggests we are at peak growth. The question isn’t are we starting to slow but what are we slowing down to? Q3 and Q4 GDP estimates are tracking 6.8% and 5.6% respectively. Obviously well above historical patterns. Each quarter there after trends lower. If we’re setting up for a 3% or higher sustainable GDP, I think stocks can continue to push the envelope on valuations. If not…

Outside of COVID and another downturn in economic activity China continues to be a major risk. No question they remain an adversary and will look to exploit any opportunity to challenge the U.S. economically, and as we’ve seen recently foreign policy as they look to capitalize on the U.S. exit out of Afghanistan. But make no mistake they are a huge military threat as well. At some point the administration will be forced to confront China over a range of issues ranging from cyber security to their repeated incursions into the Air Defense Zone of Taiwan.

The economic calendar looks heavy this week as we approach the Labor Day Holiday weekend. Consumer Confidence on Tuesday and Wednesday’s ISM Manufacturing are highlights but all eyes will be on Friday’s non-farm payrolls. Consensus is for another strong print at 800k and 5.2% unemployment. Anything meaningfully outside those numbers will force some re-positioning.