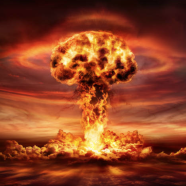 Posted by David Nelson, CFA on February 27, 2022 in Investment Management | Leave a comment

Images of ordinary citizens taking up arms to defend their country as a full scale Russian invasion of the Ukraine unfolds, forces investors to focus on more than just market fundamentals and the health of the economy. Today we have to consider a sociopath with his finger on the nuclear trigger.

As of this writing despite overwhelming odds Ukrainian forces have held Kyiv and talks between the two nations are planned for tomorrow. It’s unclear exactly where the talks would take place or if anything can be done to pull back from the abyss.

In a further sign of his frustration and lack of success in ending the conflict quickly a desperate Putin ordered the country’s nuclear-deterrence forces to be put on alert. Looking to do a full geopolitical reset of the last 40 years Putin is clearly not just concerned about Ukraine someday joining NATO. He hopes to end the parade of nations that have turned away from Russia looking to embrace policies and economic prospects offered by the west.

The Wall Street Journal is running a headline stating the obvious, Ukraine Crisis Upends Investing Playbook for 2022. No kidding.

The west is rolling out its own nuclear option as the U.S., the U.K., Canada and now Japan are ejecting some Russia banks from the global financial system’s payments infrastructure, Swift. This is largely a messaging system that helps banks process the millions of transactions that take place daily. It doesn’t make it impossible to conduct business but certainly makes it more difficult.

Remember China has come out in defense of Russia saying they would do what they can to help reduce the pain of western sanctions. We’ll see how long that lasts if it starts to impede or harm their own interests. All eyes are on Taiwan.

Where is the bottom?

The questions I’ve been asked most in the last 72 hours is what drove the dramatic rebound off the lows Thursday and follow through on Friday? And of course, the obvious follow-on question; Have we seen the Bottom?

Look my crystal ball is as cloudy as anyone’s and the best I can come up with is the following.

Stocks don’t have a conscience but are focused on economic output. My post from last month, No Man’s Land – How far could stocks fall pointed to two potential downside targets for stocks. At the intra-day lows on Thursday, we came within 100 S&P points of the base case.

Despite the geopolitical backdrop, inflation and a Fed looking to defend it’s credibility, estimates for earning’s growth this year still haven’t budged. If I put an 18 multiple on the current $223 S&P earning’s estimate you get 4,014. I didn’t pick it out of thin air. It’s just the mid-point of the valuation excess of the dot.com bubble and the cheapest markets have been since.

Market bottoms are a process

The invasion was the most telegraphed geopolitical event of my lifetime. In hindsight it’s fair to say a lot of the selling took place in the days leading up to the event. Thursday’s intraday low was 4,114.65.

Market bottoms are a process and at least for now that process has begun. Technician’s will look for a test of that level with hopes we can build on it and repair the severe technical damage. In the end few will believe we’ve returned to a bull market until we take out the highs an event, I don’t see this year.

Coming into the start of the year most broad bracket investment houses were looking for a 10% move higher in 2022. Given the multiple compression and the current geopolitical backdrop I think most would be happy to get back to the flat line. Flat is the new up.

Needless to say, the news cycle is fluid, and anything can happen.