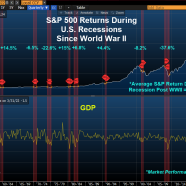 Posted by David Nelson, CFA on May 31, 2022 in Investment Management | Leave a comment

U.S. markets put in their first up week in nearly 2 months. After coming dangerously close to the traditional bear market, down 20% the S&P struggled for a few days and then exploded higher. Nothing changes sentiment like price. We’ll see in the weeks ahead if sentiment readings from AAII improve.

The risk-on backdrop is a welcome relief but doesn’t change the fact that the Federal Reserve is set to tighten financial conditions in an attempt to force inflation expectations lower.

On Friday, the Fed’s favorite inflation indicator core personal consumption expenditures price index rose 4.9% in line with estimates and a deceleration from March.

Now the debate surrounding peak inflation begins with many talking heads saying the worst is behind us. To even begin going down that path, energy needs to roll over or at least plateau. As I’ve said repeatedly in previous posts energy touches every line item of the income statement. The industrial complex and in turn the retail consumer only have a few choices. Both can cut demand which eventually shows up in reduced economic output or raise prices. Some industries have been reluctant to raise prices for fear of losing market share.

We saw how that decision worked out for Target (TGT) and Walmart (WMT) earlier this month. Both saw their biggest one-day declines since the crash of 1987 on the day of their reports.

The above has both Wall Street and Mainstreet talking about a recession. As I pointed out on my most recent interview with Fox Business anchor Maria Bartiromo markets have already made that decision. A recession is likely late this year or early next. I expect after this week’s non-farm payrolls, the jobs market will start to show signs of deterioration.

We’re already seeing changes in the labor backdrop as companies start to curtail hiring or consider layoffs. In the world of venture capital, boards and investors are encouraging founders to rethink business models and extend the runway. As in the public markets growing revenue without a pathway to profitability within a reasonable timeframe doesn’t cut it anymore. That’s why Free Cash Flow has been the rallying cry of stocks this year.

So, what happens to your stocks if we do get a recession? Intuitively it begs the question why own stocks at all?

Of the 12 time periods 5 of them saw price gains. The average decline during a recession over the last 76 years is -2.3%. (Different vendors come up with slightly different readings but the concepts are the same. Bloomberg and Wikipedia were the sources for this article)

Stocks are of course a discounting mechanism and often react well in advance of the actual event. At the lows, the S&P and NASDAQ 1000 were down close to -20% and -31% respectively.

The challenge and questions today are the following:

What I’m Looking at

If you believe the Fed can bring down inflation back to its 2% target anytime soon, then you’ll be able to go back to stocks that fell out of favor over the last year.

Prior to this year’s downturn, Growth at the RIGHT price morphed into Growth at ANY price. Over the last year that trade has been largely undone.

I think the Fed with a little help from improved supply chains will eventually get a handle on inflation, but I don’t think it will make it back to the 2% target anytime soon. Financial conditions will remain tighter than previous years.

In that mindset I have to have valuation support for any stock I purchase.

Stocks have been struggling all year as the dollar continued to advance higher. Large Cap multinationals with significant offshore sales feel the drag as their goods become more expensive to purchase. Coincidence or the reversal of a trend? Last week’s explosive move off the bottom was reinforced by the dollar losing some strength across a range of currencies.

Widening credit spreads are an indication of economic concern as financial conditions tighten. During the March rally and the most recent one last week we saw the spread between investment grade corporate bonds narrow while stocks ramped higher. Who’s following who?

We’re coming to the end of earning’s season but a few notables this week. Salesforce (CRM) and HP (HPQ) Tuesday and CrowdStrike (CRWD) and Lululemon (LULU) Thursday. That’s it for me. Have a great week.

← Father I have sinned! Let’s hope we don’t Bleed Out →