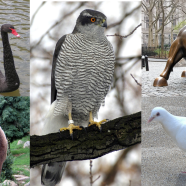 Posted by David Nelson, CFA on August 22, 2022 in Investment Management | Leave a comment

Wall Street has always had a passion for animals. Throughout history market and monetary policy sentiment has been represented by all sorts of creatures including bulls, bears, doves, hawks and of course the dreaded black swan.

This year the zoo animals have been particularly active. At the start of the year hawks and bears ran the show as climbing interest rates sent investors scrambling for shelter from a monetary sh*t storm that at the lows wiped out close to $14 Trillion in U.S. market capitalization.

Rising inflation was the trigger for a born-again Federal Reserve to abandon their game plan shifting to an aggressive string of rate hikes hoping to tame the inflation beast. To date the only evidence, we have that this is working is a single set of inflation numbers showing a slight downtick in the headline numbers. Month over month was a little more encouraging coming in with a goose egg.

Some will point to the fall in oil and with-it gas prices as evidence the plan is working. Remember the administration has and still is selling 1 million barrels of crude a day from the Strategic Petroleum Reserve.

We’re one hurricane away from a crisis

The program ends just in time for the November elections and all in will have sold 180 million barrels. They obviously have to put it back as current policy has left the United States without a backstop. An additional conflict that interrupted supply further or a natural disaster is all it would take to overwhelm the energy complex.

Where are we now?

Here we are 7 weeks into the second half of 2022 and the bulls and doves have taken the high ground pushing markets well off the lows including a NASDAQ that has technically achieved bull market status rising better than 20%.

The Class Gets a D

Herein lies the debate for future battles. There’s little we can point to fundamentally to support the recent run. Earnings season is just about over and if I were a teacher, I’d give the class a D.

Investors have chosen to look through the current set of reports. Company after company have reported deteriorating metrics or at best a beat on lowered expectations. Analysts after being in a coma for most of the last 6 months have finally gotten the message and have started to cut estimates.

I still stand by my call that we’ve seen the lows for this year. To break the June lows, we’re going to need to see something we haven’t seen yet. Listen to what I’m saying. I didn’t say we can’t go lower or even that the cyclical bear market is over, but markets are discounting mechanism and price momentum often leads fundamentals.

The above chart is ground zero for the current bull, bear, dove, hawk debate. Markets are pricing in not just a peak in fed funds by this time next year but monetary policy that will reverse course with many expecting several rate cuts in the back half of 2023. Morningstar is on record saying they expect 2023 to end with a fed funds rate of 1.75% well below where the rest of the street.

Most valuation models start and end with the risk-free rate and any movement or even the perception of a change in future policy has an enormous impact on multiples and with-it equity prices.

Outside of quantitative easing the Fed has two principal tools to control rates and future expectations. The rate part is easy, and we look to each FOMC decision day for fed funds to be up, down or remain the same. Perception of future policy comes from the press release and the conference that follows.

Whether by design or just a lack of discipline the Fed’s more often used tool is an endless stream of talking Fed heads making casual comments to reporters or an appearance on your favorite financial news channel.

The confusion that follows is often self-defeating. Perhaps more helpful would be a Fed that speaks with one voice.

Jason Furman a former colleague of Secretary Summers said the exact opposite in the same Bloomberg article.

We’re just in front of the Jackson Hole retreat with intense speculation regarding Jay’s opening remarks. He addresses his colleagues on Friday and you can bet every word will be parsed looking for clues or a hidden agenda. Powell has an opportunity to reset expectations. The question is Will He?

From a technical perspective the market has seen significant repair. At the lows of June, the percentage of stocks above their 200-day moving average was just 18.9% and today is over 41%. The low reading in June matches levels we’ve seen in many bear markets but not what we saw during the Financial Crisis of 2008 or the Covid Lows of 2020.

It was hard not to notice the trend line break to the upside on July 19th. It set the stage for a significant rally that put the Nasdaq in bull market territory.

Just from that close of that day the S&P 500 added another +9% before failing at the all-important 200 day moving average.

That’s in the rear-view mirror and now the lines move. Only this time we’re looking at a down trend line drawn from the all-time highs. A breakout here would be significant and fuel more price momentum to the upside especially if it happens on volume.

$2 Trillion was the only number you needed to know Friday as options expiration day gave bears some hope the recent rally was losing some steam. This week will be all about the run up to Jackson hole with commentators giving you their version of what Jay will and won’t say.

I left the best for last. The Black Swan emits more fear than the ferocious bull or bear and can cause more damage than even the hawks or doves.

By definition a Black Swan event can’t be predicted but it doesn’t keep us from trying. The two most obvious scenarios would be triggered by one or both of our major adversaries.

We’ve been butting heads with Russia since the end of World War II. Maybe General Patton was right, and we should have just kept on pushing all the way to Moscow.

Here we are more than 3/4 of a century later and we are head-to-head with a sociopath capable of triggering a nuclear event threatening not just Ukraine’s sovereignty but all of Europe. Putin’s ability to cripple the continent economically by cutting off energy supplies or a potential nuclear disaster at the Zaporizhzhia nuclear power plant speaks to the gravity of the situation

Half a world away another Black Swan lives threatening Taiwan with a recent set of live fire drills by China’s President Xi. This is how mistakes happen. All it would take is a young pilot or ship commander from either side to get their orders wrong and trigger an all-out war forcing the United States to jump in.

Investors are caught in the middle with a Fed looking to regain their credibility on one side and on the other a geopolitical backdrop just this side of DEFCON 1.

“Ladies and gentlemen, this is your pilot Captain Nelson speaking from the flight deck. . Please fasten your seat belts and follow the instructions of the crew members. We’re expecting a little rough weather ahead.”