Amazon wants to rule the world

How can anyone compete. Jeff Bezos has convinced the investment community that they don’t need earnings as long as they can keep growing. An enormous advantage over just about any company on the planet with the ability to plow back earnings into R&D and CAPEX. David joins the Yahoo team to discuss Amazon’s move into […]

David says this was Jeff’s call. The backlash from consumer advocates forced Amazon to exit the program before it even had a chance to start.

4 Years Later Amazon is Back Inside Target

4 years after Target kicked Amazon products out of their stores they’re back in. During that time Amazon added 19 Million Prime subscribers. David discusses with the Yahoo panel.

This is War! – Walmart takes on Amazon

Once a critic of Walmart David now defends the company’s efforts in challenging online giant Amazon. 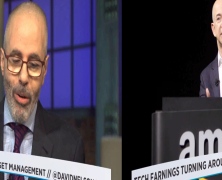 By David Nelson, CFA Just some quick thoughts from last nights’ Amazon (AMZN) conference call. Amazon (AMZN) may be at a crossroads with investors. No one is questioning the success of the company or Jeff Bezos vision. Unfortunately this vision demands levels of investment that wipes out profits and continues to force investors to look […]