By David Nelson, CFA CMT With the exception of China most global markets put in a strong week and now the S&P 500 finds itself right up against resistance and a chance to break into the RED ZONE. With the goal line just 5% higher a little good news on the virus or earnings could […]

Gekko: It’s a Zero Sum Game – Somebody wins somebody loses

By David Nelson, CFA We’ve hit the point of no return for 2017. Probably a good spot to check our compass and make sure we have enough fuel to complete the journey. With the exception of a few bumps along the way the broad indices have been relatively benign. However, trading beneath the surface has […]

David talks about the recent sell off post January’s jobs report. Did good news sink the market or is there something else going on. 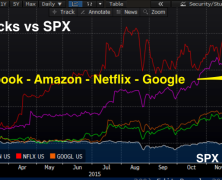 By David Nelson, CFA 2015 will end the year frustrating both bulls and bears. Unable to sustain a breakout in either direction, trends were tough to come by and most couldn’t sustain themselves long enough for investors to jump on board. While the S&P looks to come in about flat for the year one look […]