The Thrill of Victory Meets the Agony of Defeat

By David Nelson, CFA Trade and rising interest rates top the list of investor concerns as we kick off the earnings season. Banks take center stage Friday as JPMorgan (JPM), Citigroup (C ) and Wells Fargo (WFC) all report. Last week-long rates breaking to the highest levels since 2011 set the stage for a marked […] 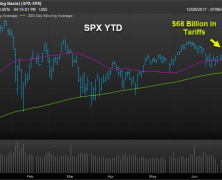 By David Nelson, CFA In a shortened holiday week U.S. large caps managed to put in their first positive performance in the last four despite the Friday launch of $34 Billion in tariffs on China with a reciprocal move by Beijing. The strongest performance came on Friday just hours after both sides pulled the trigger […]

David talks to CNBC host Bill Griffeth on Growth vs. Value. “Maybe we pushed some stocks just a bit too far.”