By David Nelson, CFA CMT June was a monster month on the heels of a disappointing May that drove many investors to the sidelines including a few Wall Street legends. Hedge Fund star Stanley Druckenmiller announced he had dumped most of his exposure to stocks shortly after a May 5th tweet from President Trump, raising […]

By David Nelson, CFA Risk assets put in a strong showing last week despite rising concerns over trade. Going into the G7 Summit, tensions were high and with the President rejecting a joint communique on the heels of a harshly worded statement from Trudeau, it’s a dynamic that isn’t likely to end soon. They only […]

By David Nelson, CFA After a stunning near 60% rally in crude, end of first quarter data suggests mutual funds decided it’s time to overweight oil stocks. That alone should make any oil bull nervous. It’s not just technology and FANG stocks where momentum traders live. Apparently they are alive and well in the oil […]

Weighing in on North Korea Talks

North Korea – When Will Markets Care?

By David Nelson, CFA Bottom line we screwed up. Every President since Reagan bears responsibility for North Korea. Each passed it on to their successor and now President Trump is clearly facing a series of decisions that will likely define his presidency. The administration has repeatedly said all options are on the table. It’s pretty […] 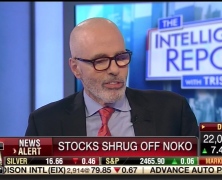 Something more frightening to investors than North Korea

By David Nelson, CFA On the heels of an excellent earnings season strategists from Merrill Lynch to Goldman are discussing the disappointing price performance of stocks that beat expectations. A sell the news mentality has been the driving force as traders and algo driven machines exited positions stepping aside hoping for a better entry point. […]

By David Nelson, CFA “What’s past is prologue.” – The Tempest (Act 2 Scene 1) William Shakespeare Before we look into my crystal ball for some insight into 2017 let’s take a walk down memory lane and review a few of the events that shaped the year. Right out of the gate trading halts in […]