The New New Line in the Sand – Follow-Up

Posted by David Nelson, CFA on October 22, 2014 in Investment Management | Leave a comment 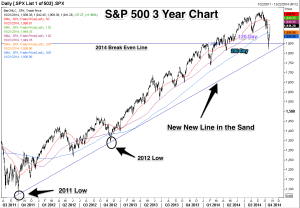 From the start of the decline to the present talking heads including yours truly have been drawing an endless series of chart trend lines searching for one that supports an extension of the bull thesis. I started off a couple of weeks ago with the 120 moving average which lasted only a couple of days. For the moment my New New Line in the Sand which I put out last week seems to have held. Even the YTD break-even line wasn’t broken on a closing basis.

Of course this is only part of the story. The intensity of last week’s selling had many bulls questioning their resolve and it’s clear that for some the decision to sell was made by margin clerks. An endless parade of Fed Governors issuing conflicting statements and a Fed Chairman who seems to have taken on a whole new series of mandates wasn’t enough to prevent the liquidations.

The question now is after a V shaped rally off of last week’s low; is it time to sound the all clear siren? Most pro’s will tell you that we need to re-test the bottom slowly working our way higher as we take out the overhead supply of sellers. I’ll go along with that but intuitively I think most of us realize that’s code for “We Don’t Know.”

I’ll be surprised if we continue straight up from these levels. I suspect it’s going to take some time to retest the highs but that’s a subjective measure. In the end we are going to be lead out of this by earnings and strong guidance from economically sensitive companies. My base line target at the beginning of the year was 2000 and remains so. S&P estimates for 2014 are still tracking between $117 & $118 up about 8% over last year. That gets us to 2000. We passed that milestone earlier this year and the challenge now will be to crawl back. 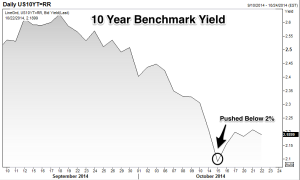 The most frightening picture I’ve seen all month came from the 10 year benchmark yield when it briefly pushed below 2%. I’ve written about the how low European yields act as an anchor to our own but a push below two percent was partly the result of recent comments from Fed Governors hinting another round of QE would be needed.

The two month sector performance chart says a lot about the market’s recent slide and push off the bottom. Defensive sectors like Utilities, Staples and Healthcare have pushed higher while key cyclical sectors i.e. Industrials, Tech and Energy have lagged. I don’t believe Energy has to lead but its imperative that Industrials, Tech and Financials move to the top of this page.

On the 15th of October I spoke with Yahoo’s (YHOO) Aaron Task and said the following. “We aren’t going to climb out of this on the back or stocks like Con Edison (ED).” The good news is over the last two days interest rates have risen and leading us off the bottom were Conglomerates, Industrials, Tech, Healthcare and Basic Materials. Utilities brought up the rear registering the worst performance. We need to see that continue.

If defensive stocks take back the lead on a sustained basis then head back to the bunkers. The storm hasn’t passed.

← The Fed Needs a Communications Czar! The Holy Grail →